We publish a brief statement from the Worker-Communist Party of Iraq on a recent protest, where IMT supporters also participated. 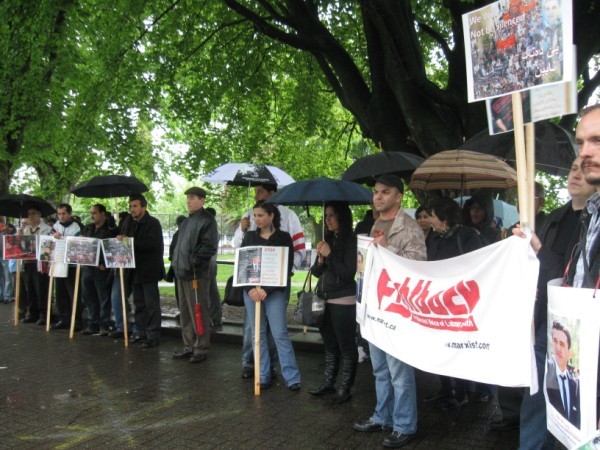 The Worker-Communist party of Iraq participated along with a number of political parties in the rally which was held in the city of Vancouver, Canada, to protest the kidnapping and murder of the student and journalist Sardasht Osman in Erbil, a city of Iraqi Kurdistan earlier this month [May].

A number of the participants spoke and condemned the criminal act, and joined the protesting voice of the masses in Kurdistan. In support of their demands Ammar Sharif, representative of the Worker -Communist party of Iraq, gave a speech and Akram Nadir spoke representing the Federation of Iraqi Worker Unions and Councils. They condemned the assassination of the journalist Sardasht Osman and emphasized the need for an investigation by an independent commission, and the full disclosure of its results. The perpetrators and those who stand behind them must be brought to a public and just trial. Furthermore, the Kurdistan Regional Government and Kurdistan Democratic Party must be held accountable and not put obstacles in front of the demand for an independent investigation into the assassination of Sardasht Osman.

At the invitation of the WCPI, Mike Palecek participated representing the Canadian Union of Postal Workers, as well as the representative of the IMT (International Marxist Tendency) Kevin Bell. Both gave speeches supporting the masses of Iraq and Kurdistan in the struggle for freedom and equality, and condemned the murder of journalists and the elimination of freedoms, offering full support for the demands of full disclosure and the prosecution of Sardasht’s killers.

The WCPI thanks all who attended, participated and contributed in organizing the rally despite the rainy weather. We call on all workers, students and their families to continue the struggle in defense of political freedoms, against terrorism and repression.