Canada
Share
Tweet
14 students at UofT, including Canadian Marxists active with Fightback, have been arrested on false charges for fighting for free education. The charges include assaulting a police officer and forcible confinement, which could lead to serious jail time. The University is trying to crush this movement under repression before it takes off. Solidarity action is needed now!

Over the last few weeks, students at the University of Toronto (UofT) have seen a surge of activity and vocal opposition to proposed fee increases. Students mobilizing against tuition fees are now being subjected to a campaign of intimidation by the UofT administration and Toronto Police. The University pressed charges against 14 students, including Canadian Marxists active with Fightback. The charges include assaulting a police officer and forcible confinement, which could lead to serious jail time. The students have been released on strict bail conditions, which include not associating with each other outside of court and classes and not protesting anywhere on the University of Toronto Campus. These conditions clearly violate the Charter rights of the accused. Further, the University is investigating 12 students under the Code of Student Conduct which may lead to expulsion. 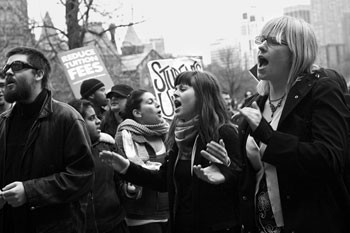 On March 20th, a group of students, staged a peaceful sit-in at Simcoe Hall at UofT, demanding to be received by a representative of University President David Naylor. Instead of granting the students an audience, the University administration employed the campus police to violently oust the sit-in, injuring several students. The University Administration then issued a press release stating that outside instigators had attacked campus police officers. In the following weeks, campus police vehicles followed students across campus and plainclothes police attempted to surveil and photograph student meetings. Undeterred, students have continued to organize.

This incident polarized the campus along class lines. Working class students rallied around the protesters while the children of the wealthy started their own campaign denouncing the sin-in participants as "dangerous radicals." On March 25th a rally in defense of the sit-in and reiterating the opposition to the fee hikes, held in a hail storm, attracted over 200 students. A second rally, held during the exam period on April 10th, attracted an additional 100. Last night almost 200 packed the Toronto Steelworkers' hall to discuss how to spread the solidarity with the 14 and fight for free education.

The most striking thing about these mobilizations is that they are organized based on the demand for the elimination of all fees from the education system.

This crackdown on freedom of expression comes at a time when tuition is being increased once again, from 2 to 23% this year alone and while the UofT administration continues to publicly lobby for the deregulation of tuition fees.

For years, the only outlet for most students to express their frustration with exorbitant tuition fees has been through the Canadian Federation of Students (CFS). The CFS leadership has long taken the approach that student mobilization is to be used only as leverage for their lobbying of politicians and political parties. Letter writing campaigns and (mostly fruitless) meetings with Ministers and MPs have characterized the student movement in Ontario for the last decade.

The only real action organized for students is the February 7th "Day of Action," which was cancelled this year by the CFS leadership for fear it might interfere with lobbying efforts during the then on-going election campaign!

The common view held by CFS bureaucrats is that students are too apathetic to be organized from the bottom-up and a demand for free education would only scare people away. This flies in the face of the experience of the Quebec student movement which achieved a massive mobilization during the 2005 student strike, and again in late 2007, largely on the demand for free, universal education.

The movement in Ontario is, in many ways, in an even better position to organize large-scale mobilizations for the elimination of fees. There is massive dissatisfaction among students. The February 7th "Day of Action" (when it is actually held) sees thousands of students demonstrate, even in the absence of a focused movement. Also, unlike Quebec, there is a far more unified student movement with the CFS as the only real student federation in the province. After years of quiet, peaceful and frankly ineffective lobbying on the part of student politicians, finally Ontario students are starting to take more effective and militant actions. The university administration recognizes the threat of rank-and-file student mobilization and is attempting to crush it under the weight of repression before it takes off. We cannot let this happen. 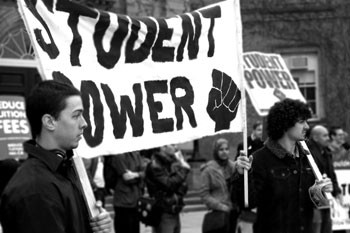 The problem of the student movement in Ontario is one of leadership. The actions of the UofT students clearly show how even an impromptu group were able, on the basis of free education, using militant tactics and grassroots organizing, to mobilize large numbers of students in the struggle for better education. If such a campaign were pursued by a nation-wide organization like the CFS, with its dozens of full timers and significant resources, the scope would be hundreds of times larger. Encouragingly, CFS representatives at the Steelworkers' Hall meeting were fully supportive of the solidarity campaign and offered help and resources - this offer should be taken up enthusiastically and spread widely.

The claims that Ontario isn't ready for a serious student mobilization like the one in Quebec are an utter fabrication. Already, movements are appearing on campuses to express the anger of working class students. Unfortunately, these movements have been forced to bypass the "official" organizations of the student movement.

For years the ruling class in society has been attempting to retake the hard won gains of the labour movement, achieved over the past fifty years, in order to increase the amount of profit it can extract from society. One of the capitalists' main targets is the right to an affordable education for working class youth. Tuition and other fees have been steadily rising for years, and have had the effect of decimating the working class population on campuses while doing nothing for the quality of education. Those that remain are overburdened with debt from high interest student loans and the extra workload of having to hold down part-time jobs to alleviate the grinding poverty.

A movement to reclaim the students' organization, on the basis of fighting for free education and making links with workers, could even achieve greater victories than the Quebec student movement. It could act as a beacon for mobilizations in the rest of the country and beyond.

Fightback and the International Marxist Tendency supports the following demands of the student protestors at UofT:

WHAT YOU CAN DO TO SHOW SUPPORT

Send a message of support and/or send your name and affiliation to fightfees@gmail.com and fightback@marxist.ca to call for:

a. All charges to be dropped and the Code of Student Conduct investigation halted, equal access to education, and parity in University decision-making

b. Send letters of condemnation to the President of the University of Toronto, David Naylor, at david.naylor@utoronto.ca (please CC all emails to fightfees@gmail.com and fightback@marxist.ca) or phone David Naylor at 001-416-978-2121 with an emphasis on condemning the following:

i) The policing of dissent and protest on campus. In the wake of the March 20 sit-in, 12 students are being investigated under the Code of Student Conduct and student organizers have faced intimidation and surveillance from the campus police. More recently, the University has pressed charges against 14 students and organizers.

ii) The constant marginalization of student, faculty and worker voices.  Examples include ordering campus police to aggressively remove peaceful protesters on March 20 and moving the April 10 Governing Council meeting away from students speaking out against fee increases;

Please make clear that you heard of this campaign through Fightback and the International Marxist Tendency.

For more information visit www.fightfees.ca or contact the students at: fightfees@gmail.com