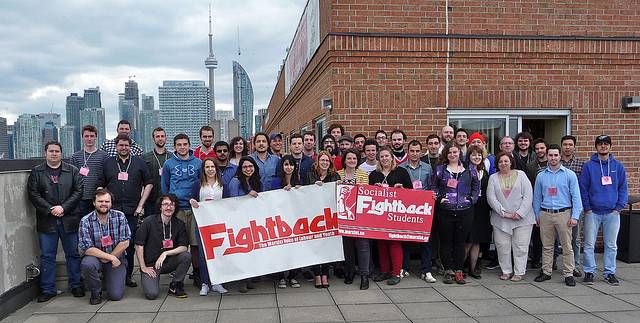 Revolutionaries from across Canada gathered in Toronto on the weekend of May 17-18 to discuss the struggle for socialism against the Canadian state. This was the 14th annual National Conference of supporters of La Riposte and Fightback, bringing together almost 60 revolutionaries from the West Coast to Quebec. Revolutionary greetings were also sent from comrades on the Prairies who, unfortunately, were not able to make the trip to Toronto. The conference took place in an era of the deepest crisis in the history of capitalism and where revolutionary movements are spreading across the globe.

This was the second National Conference that was fully bilingual, with all sessions and discussion being translated into French and English. This unity of the working class across national divisions was reflected in the fact that the largest delegation of francophone Marxists attended the conference this year. They brought great energy and insights to the gathering.

The conference opened up with greetings from revolutionaries from across the globe. This included warm greetings and messages of solidarity from the United States, France, Venezuela, Mexico, Argentina, Sweden, Denmark, Belgium, Italy, and New Zealand, setting a distinctly internationalist tone to the conference from the very beginning. In addition, Rob Sewell, editor of the Socialist Appeal magazine in the UK, was an invited guest speaker.

Rob Sewell opened up the first session of the conference on the topic of perspectives for the world revolution. He began by focusing on the world economic crisis, which, six years after the collapse of Lehman Brothers, has seen the weakest “recovery” in the history of capitalism. Europe continues to slide downwards, capital investment is slow, and consumer spending is stunted by vicious austerity cuts and household debt in the advanced capitalist countries.

The slow-down in Europe and the United States has begun spreading to the emerging economic powerhouses in the ex-colonial world. Just a few years ago, these emerging economies (especially China) were supposed to save the world economy according to bourgeois commentators. As the Western markets for these largely export-driven economies have shrunk, and as cheap credit becomes more precarious, rapid economic shocks and slow-downs are being felt.

This has meant tremendous economic and political instability in the advanced capitalist countries, with polarization and radicalization of society continuing (particularly in Europe). This has given rise to an increase in youth movements and strike waves, as a means to resist the unprecedented rolling back of living conditions since the post-WWII period. This same economic and political instability is creating the conditions for revolutionary upheavals in the global south. A case-in-point is the so-called “Turkish Miracle”, which has quickly become its opposite, a veritable economic nightmare.

This was highlighted by the fact that just a few days before the start of the Canadian conference, a heroic resistance was being initiated by the Turkish working class in response to the tragic disaster where over 300 miners were killed in the town of Soma. This disaster was no mere accident, but rather a product of the privatization of those mines, and where wages and safety precautions were cut so as to squeeze more profits, literally, from the blood of the working class.

The world situation is pregnant with potential for similar revolutionary movements. What can be said for Turkey can also be said of China, Brazil, Argentina, South Africa, Indonesia, Nigeria, Chile, India, etc. Revolutionary Marxists must be keenly aware of this perspective so as to prepare to intervene in these processes.

While there comes an incredible optimism from these perspectives of rising class struggle, it is vital to also have a sober sense of the role that the existing leadership of these movements are playing. Wave after wave of struggle has been unable to overthrow capitalism, and it can have a temporary demoralization upon the masses. This comes down fundamentally to the crisis of working class leadership and the absence of genuine revolutionary leadership.  From Athens, to Cairo, to Istanbul, to Brazil, the reformist leaders of the movement hold back, paralyze and confuse the workers and youth. It is precisely for this reason that the task of building a powerful Marxist tendency within the labour movement has such a burning urgency.

Canada: Anger of the workers held back by the labour leaders

Camilo Cahis presented the second session on Canadian Perspectives which examined the economic and political trends of the class struggle across the Canadian state. He highlighted that, despite being one of the countries least hit by the economic crisis, the economic situation was of continued stagnation since 2008. It was a “recovery” defined by low-wage and part-time work replacing good jobs, while capital investment is at a standstill and factory closures continue to devastate the manufacturing heartlands in Ontario and Quebec.

Furthermore, debt continues to increase at all levels — student, credit card, mortgage, and government. Canada’s household debt has reached levels parallel to Spain and the USA prior to the housing collapse, and there are expectations from investors and economists that the housing bubble will burst soon.  Even in the Western provinces, whose economies have been fuelled by the boom in China, are beginning to see a slowdown, further endangering the Canadian “recovery”.

Meanwhile, austerity cuts continue to be used to drive down wages and the living conditions of workers. As bad as things may appear, Camilo reminded the comrades that the worst of the austerity is yet to come. Indeed, political leaders have shied away from carrying through the needed austerity (from a capitalist perspective) for fear of jeopardizing their political careers and for fear that protests seen in Europe or the Middle East will arrive in Canada. This is most evident in the policies of Ontario premier Kathleen Wynne, who reversed (for the present moment) her predecessors’ commitment to balancing the budget through vicious austerity. At a certain point, the knives of the capitalist class will come out, provoking mass social unrest that will parallel the processes we currently witness in Western Europe.

Despite the fact that the full weight of capitalist austerity has not been felt, there is already enormous anger in Canadian society. This has been expressed through spontaneous youth movements and a desire by workers to fight back. Unfortunately, the labour leaders have been able to hold back this anger through betrayals and compromises. Although this can create temporary demoralization, the continuation of the crisis forces the workers to come back into struggle while drawing lessons from previous betrayals.

This is being reflected in a growing anger at the labour leadership, with opposition sentiments and candidates being presented against incumbent leaders. This was most notably seen at the recent convention of the Canadian Labour Congress (CLC), where for the first time in its history, an incumbent president, Ken Georgetti, lost and was replaced by Hassan Yussuf, who was widely seen as giving a voice to the anger among the ranks. This is a reflection of the molecular process of polarization and radicalization in society. At a certain point, the working class will enter action at a mass level, shaking the entire foundation of Canadian society.

Building among the revolutionary youth!

On Sunday, the conference focused on the practical tasks of revolutionary Marxists in Canada. Alex Grant led-off the first session of the day, emphasizing the need to reach out to the most radicalized strata of Canadian society, which are primarily to be found among the youth. This is because the weight of the crisis has particularly burdened the youth, while at the same time they are more open to radical ideas, less demoralized from past defeats, and less weighed down by life obligations.

The fighting energy of this layer, which has been reflected in the Occupy, Idle-No-More, and Quebec student movements, must be given form and organization. They are seeking a way out of the impasse and barbarity of capitalist society, and it is our duty to arm these youth with the weapon of Marxist theory and methods.

In addition to the pressing need to build the numerical strength of the Marxists in Canada, it is also necessary to give the movement the tools in which to overthrow capitalism.  This task was enthusiastically taken up by the comrades present who bought a record number of books and booklets from the expansive literature stall.  As well, Fightback and La Riposte activists have organized a number of reading and discussion circles touching on the classics and relevance of Marxist theory, to the nature of the present crisis and the way out, and even to the rise and degeneration of the Bolshevik Party and the Russian Revolution.  While a focus is being given to the radicalized youth, it is also vital not to lose sight of the broader and central task of building the ideas of Marxism into a real force within the working class. This means educating and preparing the comrades to engage with the ideas, confusions, and prejudices within the labour movement.

A spirt of sacrifice 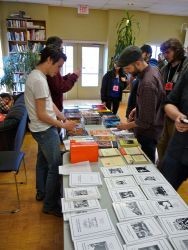 Joel Bergman presented the final discussion of the conference, on building the financial resources of the Canadian Marxists.  This year, Fightback and La Riposte took a significant advance forward with the hiring of a Quebec-based full-time organizer — a vital step in strengthening the activity of the Marxists in the province.  The taking on of this organizer was only possible because of the successful appeal made at the beginning of the year, which was enthusiastically taken on by our supporters and allies. But, there is still work that must be done to support and consolidate this advance.

The enthusiasm of the comrades was not simply displayed by words and commitments to advance the struggle. On the Saturday evening, that commitment was put to the test in a financial appeal which resulted in the collection of approximately $11,000 — a new record!  The Marxists put their money where their mouths were. The excellent collection also included contributions from revolutionaries who were unable to the make the conference, but who were keenly following the discussions, debates, and developments across the country.

This collection serves to place the organization on a good track of moving forward to ensure the stability of our Montreal organizer – and as a launching pad to further advances, such as getting an office and printing press.

This sense of sacrifice and enthusiasm to build the strength of revolutionary Marxism was clear throughout the conference. This is not surprising, given that we are likely living in the most tumultuous and revolutionary period in human history, and where only the ideas of Marxism or scientific socialism can provide an alternative to the barbarity, misery, and war that defines capitalism.

If you are interested in getting involved with Fightback or La Riposte, or to donate to the cause of building the Marxist forces across Canada, please contact us at fightback@marxist.ca.

For more pictures from our conference, please visit our Flickr page.