Details
Fightback Editorial Board
29 May 2017 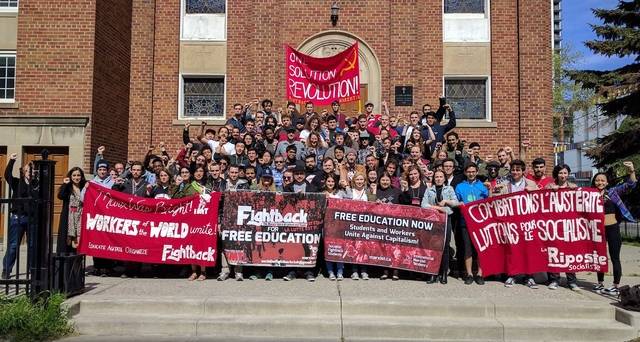 Over 110 revolutionaries gathered in Toronto May 20-22 for the 17th congress of Fightback and La Riposte Socialiste, the supporters of the International Marxist Tendency in Canada. The three-day congress brought attendees from Montreal, Waterloo, Hamilton, Ottawa, Oshawa and Edmonton, plus international guests from Sweden and Britain. The level of enthusiasm was incredibly high as the congress marked significant advances for the Marxist movement in Canada and Quebec.

On the 100th anniversary of the Russian Revolution Marxists are on the march. There was more than a 50% increase in attendance from the previous year, which reflects a similar level of growth in the ranks of the organization since the previous summer. New areas of work have developed, most notably in Southern Ontario and Alberta. The presence of the IMT in Canada has also grown to about 15 campuses, and the recent launch of Socialist Fightback Students is solidifying this advance.

With the opening of congress, enthusiastic applause roared through the hall, which was located in the historically downtrodden Regent Park neighbourhood. About half the attendees were new faces who had never attended such an event. All the discussions were fully bi-lingual, with the use of consecutive translation into English and French, making sure that all could freely express themselves in the language of their choice. 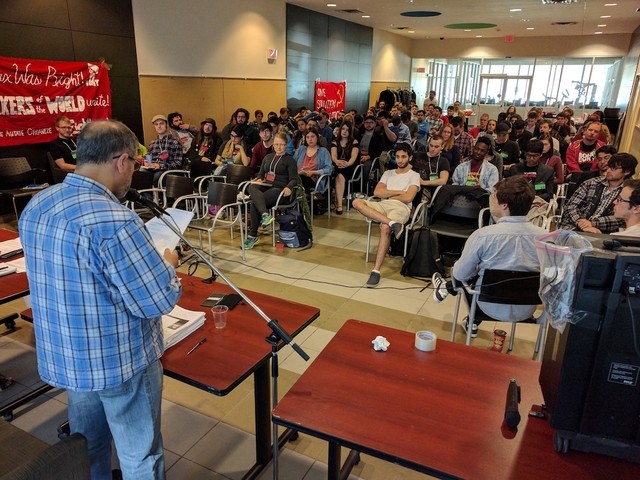 The first session was led by comrade Fred Weston, editor of the In Defense of Marxism website, on the world economic and political situation. Fred highlighted the rise of protectionism and nationalism and the threat this represented to capitalism. These policies are a logical consequence of the shrinking of the world market and the attempt of each group of capitalists to protect their access to the home market.

He explained that social polarization had spread through Europe and the United States, with a mass shift towards populist formations of a left and right variety. He explained that many of the traditional parties that are seen as part of the establishment, including social-democratic parties, have suffered significant drops in authority and support. This is an expression of the seething hatred of the masses towards the status quo. He noted that in many advanced capitalist countries polls are indicating that young people were openly identifying with revolution. A 2017 survey showed that most youth answered in the affirmative when they were asked if they would join an uprising against the government.

The second session was held on Saturday afternoon, and was on the topic of Canadian Perspectives. A presentation was given by comrade Farshad Azadian who began by examining the strength of the political “centre” in Canada with the continued support for the Federal Liberals, and he explained that international commentators like The Economist have noted this as standing in contrast to the political instability seen elsewhere in the world. He explained that part of the reason for this was that after the 2008 financial crisis, Canada fared relatively better than most advanced capitalist countries and that average growth rates were higher. 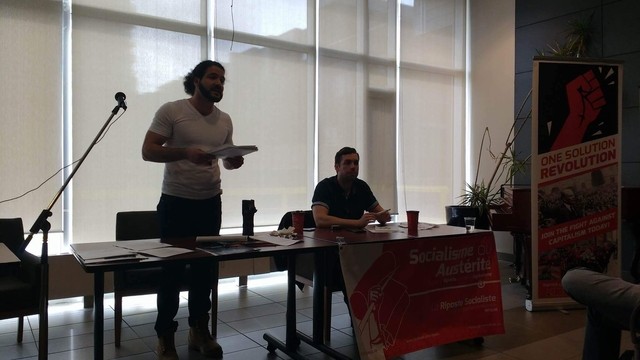 Scratching beneath the surface, however, the economy is fragile with the downturn in oil and mining, and with a manufacturing sector in decline and facing the threats of tariffs imposed by the United States. The real estate sector is now the main driving force of the Canadian economy. The massive housing bubble has been built that will burst sooner or later and we can see the looming danger of a Canadian downturn.

The discussion session opened on Sunday morning, with many interventions on the social movements and trade union struggles in Quebec, as well as recent political developments on the right and to the left in the province. There were contributions on the political situation in Alberta, Manitoba, Nova Scotia, as well as the mass movement against austerity in Newfoundland. Excellent interventions were also given on the crisis within the trade union movement and the beginning of a rank-and-file push back against the top officialdom of the labour movement.

On Sunday afternoon, Joel Bergman gave a speech on the state of Marxist organization and the priorities for the coming year. He explained the big successes of Fightback over the past two years, and highlighted the need to educate and train up revolutionary organizers from among the new members. He highlighted the need for revolutionary education as vital to this task. He explained the growing role Fightback has been playing in protest movements, especially the Anti-Trump struggles, as well as in the trade union movement. Fightback is beginning to develop a base among trade unionists, and one of the important elements of our very successful student organizing is to connect young revolutionary students to workers’ struggles that erupt in the country.

Comrade Donovan Ritch presented the session on revolutionary finances and press on Monday. He spoke about the importance of financial independence being necessary to maintain political independence from the reformist trade union, student union and social-democratic bureaucracies. He highlighted the big achievements with Fightback having hired two new organizers in the last year, including our first Francophone full-timer in Montreal. 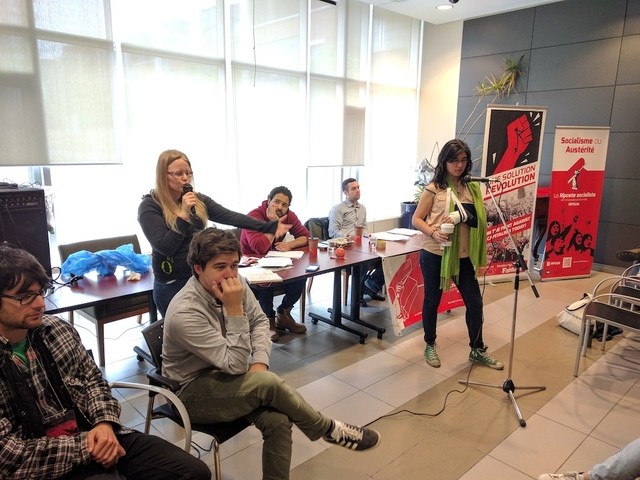 He explained that a new digital printing press had been ordered just prior to the congress, which would expand the scope and professionalism of our revolutionary media.

Very successful socials were organized on both the Saturday and Sunday evening. On Saturday evening, a financial collection was taken. The enthusiastic mood of the comrades was on display as they collectively raised over $25,000. This broke through our ambitious targets and far surpassed our previous record. On the Sunday evening, a talent show was arranged with comrades sharing revolutionary songs, poetry and comedy skits. Songs in multiple languages reflected the very diverse backgrounds of the comrades in attendance. In addition to music, drinks and relaxed conversation, there were also commissions organized in the evening on trade union work and the developing work in Southern Ontario. There was also an in-depth report of the work of Fightback-initiated rank-and-file caucus in the Amalgamated Transit Union local 113 (Toronto transit workers). That caucus developed in the context of the recent leadership scandal in the union, and comrades from across the country avidly listened to experiences and lessons of that struggle.

The last session of the congress was a report of the work of the International Marxist Tendency throughout the world. Fred Weston also gave this presentation, and in speaking of the work of the Marxists in many countries he was speaking from experience of having recently travelled there to assist our sister organizations. Reports of the activity of Marxists from Sweden to Pakistan, from Brazil to Italy, from Australia to the United States were provided. There was a real feeling at the congress that our struggles here in Canada are part of the struggle to overthrow capitalism across the globe.

The comrades marked the end of the congress with a rendition of the Internationale and the singing of the Italian revolutionary song, Bandiera Rossa. People left feeling very energetic at the enormous possibilities that exist to build the Marxist movement. At a time where much of the left in Canada is in crisis, confusion or in decline, the IMT has marked one major advance after the next. We have built the most organized and largest revolutionary organization in the country.

At the same time, we understand that we are still in the early stages and our forces are still modest. Big struggles are being prepared in Canada. Shocks in world politics, and the developing crisis in the Canadian economy, will prepare the grounds for big movements to come. We have built a bold, youthful and energetic organization armed with the most effective ideas in the struggle for the emancipation of humanity – the ideas of Marxism. The imperative felt by all who attended was to take these ideas, methods and traditions into the campuses, protest movements, and worker struggles that are developing in Canada. Our aim over the coming years is to build Fightback into a reference point for the advanced layer of the working class and youth of Canada.