Sharp and sudden changes in the situation - that is the nature of the period. In the space of 24 hours, Cameron and the coalition government have gone from banging the drum for military strikes against Syria to a humiliating parliamentary defeat. The situation is unprecedented, where the government of the day, recalling Parliament to basically rubber stamp a vote, has been defeated over a vote on military action. 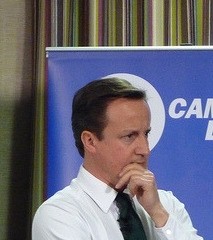 Cameron’s political authority has been completely undermined. After defeating the Labour amendment, the government thought they were home and dry, paving the way for a later second vote on the timing. But with 30 Tory MPs rebelling, the government lost the vote by 272 votes to 285. This means that Britain will not now participate in the planned bombing of Syria. There has never been such a defeat on a foreign policy issue.

The government had earlier attempted to lay the basis for pushing through their resolution on attacking Syria by publishing an intelligence report showing that Assad was responsible for a chemical weapons attack on the Syrian opposition. But with the “dodgy dossier” of Blair - “proving” that Saddam Hussein supposedly held weapons of mass destruction - still very much in the public memory, there could only be scepticism about this new dossier.

Despite the gung-ho position of Cameron earlier this week, things began to unravel as the Labour leadership, under pressure, was forced to back away from its initial support for action. This forced Cameron to retreat in face of a possible parliamentary defeat. He was forced to offer a compromise by promising to go through the United Nations and wait for the inspector’s report. Instead, the government, which had recalled parliament, offered a general resolution against the use of chemical weapons in Syria.

The fact that this resolution was defeated reflects the enormous anti-interventionist pressures outside of parliament. The vast majority in poll after poll rejected military intervention in Syria.

Even senior Tories were unconvinced. David Davis, a former Tory leadership candidate and Shadow Home Secretary said, "We must consider, being where we've been before in this House, that our intelligence as it stands might just be wrong because it was before and we have got to be very, very hard in testing it."

Cheryl Gillan, a former Wales secretary under Cameron, said: "I do not have enough accurate or verifiable information to support direct UK military action in Syria." Recalling the vote on Iraq, she said she was cautious because she "cannot sit in this House and be duped again".

Cameron had completely miscalculated. He was apparently confident, as over Libya, in securing a majority for action. Now his over confidence has meant egg on his face. He was not even capable of uniting his own party behind the government. This was a devastating blow.

"It is very clear tonight that, while the House has not passed a motion, it is clear to me that the British parliament, reflecting the views of the British people, does not want to see British military action. I get that and the government will act accordingly," stated red-faced Cameron.

This has led to bitter recriminations. "The prime minister has been cavalier and reckless”, stated Miliband, the Labour leader, whilst not ruling out military action. Michael Gove, the Education Secretary, was overheard shouting "disgrace" at Tory rebels. No doubt, Cameron and his clique are fuming at this humiliating defeat. Cabinet ministers rounded on Nick Clegg for his lacklustre performance. It has served to undermine the government and the prestige of British foreign policy. Lord Ashdown, the former head of the Lib Dems, stated that the vote was a disaster for Britain in undermining her position in the world.

In the past, Tory leaders were far more astute, which reflected the might of British capitalism. Today, Cameron represents a new breed on short-sighted parvenus, who demonstrate the decline of British capitalism. The loss of power of British capitalism on the world arena is shown by last night’s vote. The situation is recognition that Britain has become a third rate power that has been desperately clinging to its long gone imperial past. This had led from one adventure to another, as experienced in Iraq and Afghanistan. Even the military top brass and the intelligent services are opposed to the attack on Syria as not being in “British interests”.

These splits at the top of the establishment are unparalleled. In the past, such differences would be kept behind closed doors. They reflect the crisis of the regime that has affected Britain over the last decade or so.

Labour has clearly benefited from its stand against Cameron – a stand taken due to the opposition in the labour movement and in the whole of the country, deeply sickened by the past imperialist adventures of Tony Blair.

Philip Hammond, the Defence Secretary, who had accused Miliband before the vote of giving "succour" to the Assad regime by declining to support the coalition government, said that the government defeat would strain the Anglo-American special relationship. "It is certainly going to place some strain on the special relationship. The Americans do understand the parliamentary process that we have to go through … Perhaps they have been surprised by the scale of opposition in parliament," Hammond said.

The vote has certainly added to the woes of Obama, who had taken for granted support from Britain, a close and subservient ally. Ken Pollack, a fellow from the Saban Centre for Middle East Policy, said that with continuing uncertainty over the intelligence picture, and no obvious legal mandate for military action, the US will be desperate to secure more international backing to argue that intervention is "legitimate".

"If the administration can't even count of the full-throated support of our closest ally, the country that stuck by us even during the worst days of Iraq, that legitimacy is going to be called into question," stated Pollack.

Whilst British support would have given Obama more legitimacy, he will nevertheless be determined to ride out the opposition in the United States and proceed with military strikes against Syria. But he will now be forced to do so alone. As in Britain, people in America are opposed to more adventures along the lines of Iraq and Afghanistan. This has led to splits and divisions in Congress, making it more difficult for Obama to create a consensus. The British vote will compound these problems, as Britain was to provide the political cover needed for America to claim a democratic “coalition” against the Assad regime.

Obama has already been forced to retreat from the claim that the use of chemical weapons constitutes a “red line”, as he expressed a year ago. Before then, Obama said that Assad must leave Syria. Now Obama has dropped any talk of “regime change” and will limit US action to limited punitive air strikes, which are becoming increasingly difficult.

Whilst the US Administration has made out its case for intervention, there are widespread concerns. Ron Johnson, the Republican senator from Wisconsin, said the objects need to be defined. “I need to know the case [for war] and I also need to know ‘who are the rebels?’ We don’t know,” Johnson said. More than 100 Democrats and Republicans signed a letter urging Obama to receive formal authorisation from Congress before ordering the use of force.

The whole situation is appearing to unravel. This will not, however, prevent the US from taking unilateral action. To refuse to do so would undermine its credibility internationally. Prestige is a vital component of imperialism – prestige that the US will seek to defend at all costs.

In Britain, the Emperor has been exposed without any clothes. It marks a new disaster for the coalition government, and in particular for the credibility of Cameron. At a time of vicious attacks against the working class, they need this credibility more than ever. The government is now fighting off a no confidence motion for its handling of the situation. Cameron has single-handedly revived the fortunes of Labour - the opposition - after weeks of them being on the back foot.

It will not be long before the knives are once again out for Cameron. This episode clearly reveals that the days for the Coalition are numbered.