Jeremy Corbyn, the left wing Labour MP, has got on the ballot paper for Labour leader. This is a remarkable and welcome turn of events, despite being achieved by the slimmest of margins. 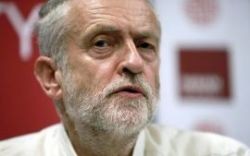 After decades of right-wing ascendancy in the Labour Party, this left-wing challenge, if waged properly, could serve to break the ice. It certainly allows a left alternative to austerity to be aired in the labour movement and beyond.

With just minutes to spare before the deadline at midday today, Jeremy Corbyn was able to pick up the required 35 nominations to stand in the leadership election. Apparently, several MPs “lent” him their support to get him onto the ballot paper. These included a clutch of right wingers, such as London mayoral hopefuls Sadiq Khan and David Lammy, as well as Jon Cruddas and Margaret Beckett, who is currently heading an inquiry into how Labour lost the election. Even Andy Burnham himself had suggested such a goodwill gesture in the name of “democratic” debate.

Former shadow cabinet minister Sadiq Khan stated he was nominating Corbyn, but without voting for him in the actual ballot, to ensure the "widest possible debate".

Jeremy Corbyn told BBC 2's Daily Politics he "fully acknowledged" that some of the nominations came from MPs who did not support his candidacy, but who wanted to ensure a full debate. This was no accident. Pressure had been building in the grassroots of the Labour Party that there needed to be a genuine contest. The prospect of a “choice” between three right-wing candidates was too much to stomach. Without a left candidate, the whole process threatened the legitimacy of the ballot.

Apparently, only 15 minutes from the deadline Corbyn was three nominations short, but then managed to scrape together a few last-minute names to make the 35-figure threshold.

Mary Creagh, Labour's shadow environment secretary, who had fewer nominations than any of the other candidates, pulled out of the leadership race on Friday night, leaving three other Blairites on the ballot: Andy Burnham, Yvette Cooper, and Liz Kendall.

Challenge to the Blairites

A campaign period will now open up. The contest will involve a series of public and televised hustings over the coming weeks. The winner will be decided by a vote of Labour Party representatives, members, affiliates, and registered supporters, to be conducted on a one-member, one-vote basis. The ballot will open in mid-August and the winner announced at a special conference, before the main party conference in September.

The other three right-wing candidates have fallen over themselves in recent weeks in putting forward a Blairite agenda, with Liz Kendal being the most explicit. They are unashamedly pro-business, with Burnham stating that “entrepreneurs are heroes in the same way as nurses”. The reason why the Labour Party lost, according to them, was that Labour appeared too “left wing”. In reality, it was not left-wing enough.

It was noticeable that Kendal, the arch-Blairite, described as “Taliban New Labour”, managed only 41 nominations, while Burnham picked up 68 nominations and Yvette Copper gained 56.

These nominations are from the Parliamentary Labour Party, which is generally far to the right of the party. The mood within the ranks of the party is far more critical. In a recent poll by Labour List, a popular independently run Labour blog, Corbyn got 47% of the vote, almost more than the rest of the others put together.

Unions must back Corbyn

This means that Jeremy Corbyn is in with a credible chance in a wider ballot, especially if the trade unions swing behind him. Despite the changes to the electoral procedure for Labour leader, the unions still have an enormous sway and influence, which should now be utilised to maximum effect.

The fact that Corbyn was forced to rely on nominations being “lent” to him by right-wingers shows that the big Labour-funding unions - such as Unite, GMB, and Unison - have dragged their heals up until now in the Labour leadership contest.

These union leaders must now throw their significant weight behind Corbyn’s campaign. Emergency motions should be put forward at the Unison conference and upcoming Unite conference to commit these major unions to backing a candidate who will back the trade unions - and this means backing Corbyn.

Whatever happens, Corbyn’s challenge serves to break the right-wing mould and at last allows left-wing ideas to be aired throughout the movement.

The capitalist press will seek to discredit his ideas; but rather than lose support, this could actually increase it under the circumstances. People are fed up with the status quo and the establishment politicians.

"I will take part in that debate and hope that at the end of it the Labour Party emerges stronger and more resolute in opposing the principles behind austerity and impoverishment of the poorest in Britain," said Jeremy, the MP for Islington North.

Fight back with socialist policies!

The Labour Party was created to represent the working class in Parliament. It adopted socialist aims in 1918, following the inspiring events of the Russian Revolution. Unfortunately, this was cut across by the right-wing take over of the party, which, under Tony Blair, even attempted to destroy the party and its links with the unions. Blair went quite far in his “counter-revolution”, weakening the trade union influence and ditching left policies. As a result, the party swung to the right and its membership hollowed out.

The ruling class are determined that their representatives within the party, the right wingers and careerists, maintain their control and keep the party safe for capitalism. The Jeremy Corbyn candidature challenges this. This means that the debate will open up the way forward for the Labour Party and the working class in Britain.

For our part, we support Corbyn’s campaign for Labour leader. All the other candidates represent the interests of big business, to one degree or another, whilst Corbyn has been clear from the beginning about his opposition to austerity.

Nevertheless, we will campaign for bold socialist policies, not piecemeal measures. We will explain that austerity arises not from the whims of individuals, but from the crisis of capitalism.

All attempts to patch up the capitalist system are doomed to failure. Only the overthrow of capitalism and the introduction of a socialist planned economy can offer the way forward in Britain and internationally.