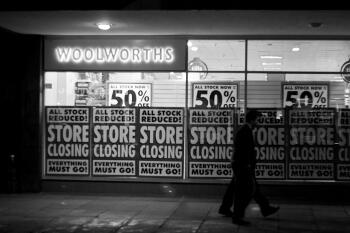 There has been a massive campaign in the British press and media to “soften up” public opinion for the cuts that loom. Above all, they are trying to split the workers in the private and public sector. Tomorrow, Saturday, April 10, a trade union march and rally has been called in London and here we provide the leaflet that Socialist Appeal supporters will be distributing on the rally. Download the leaflet (pdf)

“We are entering a new age of austerity”, stated David Cameron, representing the Nasty Party. “Within months we will be the most unpopular government since the war”, explained George Osborne. “This is an era of hard choices”, explained Gordon Brown. Even Nick Clegg has warned his supporters of “tough decisions” in cutting government debt.

This is the language of the 1930s and the Depression. It is a message from the Establishment: everyone has to take a big drop in living standards to put British capitalism back on its feet. It represents a dire warning to the Labour movement and ordinary working people.

The massive attacks on workers in Greece, Portugal, Ireland and elsewhere are a sign of what is to come here, whoever wins the election.

There has been a massive campaign in the press and media to “soften up” public opinion for the cuts that loom. Above all, they are trying to split the workers in the private and public sector. Public sector workers are pictured by the capitalist media as “pampered” in their “cushy” jobs with privileged pensions.

In reality, workers in both the public and private sector have been squeezed over many years. Stress levels have gone through the roof as workloads have dramatically increased.

However, the stampede to bail-out the banks and the City of London with hundreds of billions of public money has sent government borrowing through the roof. They have no money for struggling workers or pensioners on the poverty line, but plenty when it comes to bankers and speculators. At the same time the bosses are paying themselves massive bonuses. The notorious Fred Goodwin of the Royal Bank of Scotland received a £16 million retirement handout. A few days ago, Bart Becht, a top FTSE 100 executive received £92 million - £4.9m in pay, bonus and pension contributions, £74m in share options and £13m in performance-related shares. This summer, many banks are expected to announce more big profits and bonuses. They have done very well out of the crisis, at our expense.

At the present time, millions of workers are struggling to make ends meet. The gap between boardroom and shop floor pay almost doubled in the last 10 years. According to the Inland Revenue, the wealthiest 1% did better in the decade from 1997 than any other group. This is when Lord Mandelson said that he was “intensely relaxed” about people becoming “filthy rich”.

As the rich get richer, the politicians wring their hands. “One has to question whether modern capitalism is operating properly when these extremes occur”, stated Vince Cable of the Liberal Democrats. His party however is calling for a wage freeze in the public sector. The fact that the rich are getting richer has always been a feature of modern capitalism where greed and private profit is god. How else could it be otherwise in a dog-eat-dog society?

Now big business is demanding the government balance its books and pay back all the loans it used to bail out the capitalist system in its hour of need. There is talk of eye-watering cuts on a level not seen for generations. Whitehall’s top civil servants are being sent on courses to study the Geddes Committee in 1922 which recommended cuts of 25% in public spending. According to Lord Turnbull, the former cabinet secretary, “It is all part of psyching yourself up for something serious to come.”

The Chancellor Alastair Darling has mentioned cuts of 14% across the board to balance the books. If some areas are protected, the rest will face even greater cuts. The Institute for Fiscal Studies has mentioned cuts of up to 25%. It has called, amongst other things, to scrap national pay bargaining to drive down costs. The IFS’s so-called Green Budget says that the scale of spending cuts needed “would reverse almost all of the increase in departmental expenditure ... as a share of national income since Labour took office.”

A recent survey suggests that half of Britain’s bosses are planning a second year of wage freezes (cuts). According to John Cridland, the CBI deputy director general, “Given the alarming state of public finances we must see similar pay restraint in the public sector.”

This is nothing more than a declaration of war against the working class. It is the biggest challenge the Labour movement has faced for generations.

Although there is much talk of protecting “front-line” services, £5bn cuts (“savings”) are already hitting public services. This has already been slashed from the planned budget from April. The NHS has already taken a £4bn cut against its earlier plans, which include “efficiency savings”. This means that there will be fierce cuts in central health department budgets. Universities will be taking a £500m spending reduction in the coming year, with staff being cut across the board.

These “slash and burn” attacks will provoke enormous discontent across Britain in the same way protests have rocked Greece, Portugal and Ireland. The working class will not take these assaults lying down. However, it is up to the trade union movement to offer a lead in this critical situation.

Effective resistance cannot be organised sector by sector. The bosses will deliberately try to divide workers in order to undermine any resistance to their attacks. Only a united struggle can offer the way forward. This must not only take the form of protests and demonstrations to mobilise the workers. These actions should prepare the way for a general strike of the entire Labour movement to force the bosses and the government to retreat. “Weakness invites aggression”. Whoever wins the next election, only concerted united industrial action can stop these attacks in their tracks.

But the bosses will come back for more. Their attempt to make the working class pay for the crisis arises from the dire crisis of capitalism itself. The crisis of capitalism means that the system cannot afford the reforms of the past. On the contrary, deep, on-going counter-reforms and attacks are on the order of the day!

The only real solution to the problems of working people is a political one. If the capitalist system cannot any longer afford a reasonable standard of living for all, but means cuts and suffering, then to hell with that system. The trade unions founded the Labour Party more than 100 years ago to fight for the interests of working people in parliament. However, the trade union leaders allowed careerists to hijack the party and use it for their own ends. It is high time the trade unions took back the party for the working class. This, however, can only be achieved as part of a campaign for socialist policies to tackle the crisis.

It is the crisis-ridden capitalist system that is responsible for the cuts and hardship that we face. We need to take control of the economy out of the hands of the bankers and capitalists. Only by taking over the 150 monopolies, banks and insurance companies under workers control and management can we plan the economy in the interests of working people that can guarantee high living standards. Only then can we give everyone a decent job with decent pay and shorter hours, which will then create the wealth to finance high levels of public spending and abolish poverty. On the basis of capitalism is the road to misery and a return to the 1930s. We cannot let that happen.

Take over big business! Plan the economy in the interests of working people!

For a socialist plan to raise living standards!