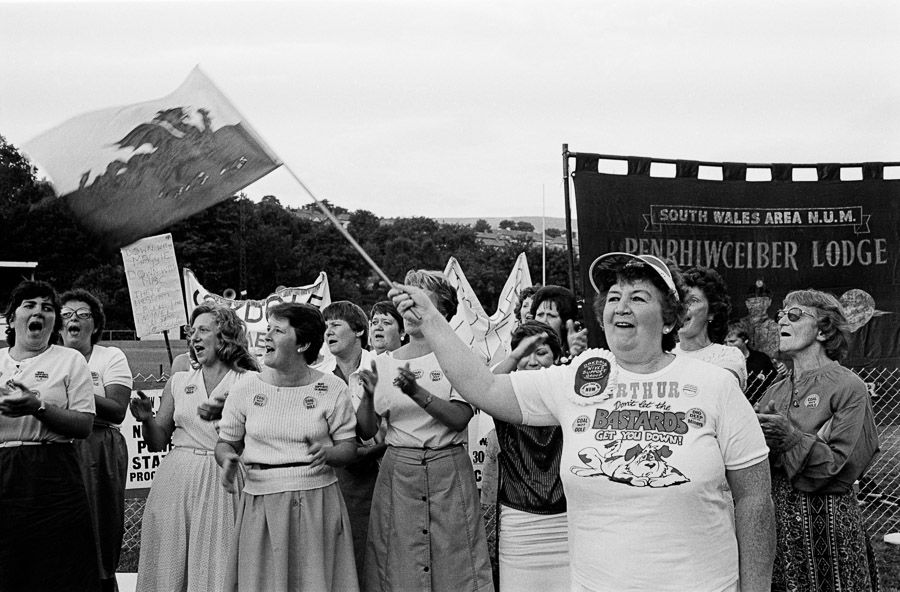 Below we are republishing, with the permission of the author, an article by Pat Reet, (an activist in Hoyland’s women’s support group during the strike) originally published in 1986.

The key role played by women in the miners' strike has been an inspiration to working class women everywhere. Many of the myths concerning women were smashed in the course of the strike. Far from being a drag on the trade union, the Women's Support Groups proved what an invaluable weapon women could be. They gained the respect and admiration of workers internationally not only for their achievements, but for the enormous sacrifices they were prepared to make in one of the longest and most bitter disputes ever waged.

Every attempt by the Tories to demoralize, intimidate and even starve the miners back to work only served to strengthen their determination which, in turn, brought forth new initiatives to counter the attacks and, in the process speeded up the radicalization that was occurring. The attempt to starve miners back to work by reducing and even abolishing benefit not only failed but led to the establishment of kitchens and food parcel centres. These not only helped to alleviate much of the hardship but, also, served to bring together many of the strikers and their families who would otherwise have been isolated and scattered, open to the lies and the distortions of the press and the media. Instead, returning pickets were able to report straight from the picket lines on what was happening. Many more strikers were drawn into activity by this contact. The rallying together of the miners and their families helped in the revival of the community spirit, raising morale and passing on information to where help with problems could be obtained.

Kitchens were only a part of what women did during the strike and, when you look at what a full role they played, you have to wonder where they found, not only the time, but the energy. Fundraising was essential to keep the kitchens going and women travelled everywhere and anywhere, speaking at meetings, collecting outside factories and even on the streets and markets, to ensure these funds continued.

The invasion of their communities by the police and the use of paramilitary tactics didn't deter many women from picketing. Women were prepared to run the same risks as the men and many were arrested in supporting the strike.

Every community, every group has its own stories to tell, enough to fill a library, of how ordinary women achieved the near impossible again and again. Each achievement added to their growing confidence leading in turn to greater achievements. Some of the best public speakers during the strike were women. Many surprising themselves at what they were capable of doing.

A young miners' wife in Barnsley found herself in constant demand as a speaker and, despite having had a baby at the start of the dispute, she spoke constantly throughout the strike, raising money for the kitchen in her own community. Her own mother, herself a miner's wife, worked 5 days a week in the kitchen where, at times, 400 meals a day were provided. Even the grandmother played a role by tipping rubbish onto the gardens of known scabs. Sadly, the young miner himself was rewarded with the sack. Despite this, when the young miner's wife was asked about the strike, she stated quite firmly that she would do it all again.

Even in the later stages of the strike, women's groups were emerging, many of whom had been opposed to the strike in the early days, but having seen the issues distorted in the press had changed their views.

Variations did however exist in many areas; some groups suffering difficulties whilst others thrived. Throughout the strike there was an overwhelming need for a National Delegate Conference to co-ordinate much of the work and help iron out many of the problems that existed. Though many welcomed the Conference called after the strike, one day proved to be insufficient to put forward resolutions or have discussions and plan for future action.

After such intense activity and enormous effort by women during the strike, it’s not surprising that many were disappointed at the NUM Conference decision to reject associate membership. Not only would it have given women the recognition they deserved for the role they played, but, it would also have forged links between the WSGs and the NUM.

“The future is ours”

Many other issues affecting women have yet to be fought. Cuts in education, housing, transport and health just to name a few. Miners' wives are not exempt from these attacks and in the fights yet to come the involvement of women with so much experience would strengthen the movement enormously.

The anger and bitterness many women feel at the attacks they and their families have been subjected to has to be harnessed into the labour movement. Women have proved what an invaluable force they can be. This needs to be built on. It was a miner's wife that perhaps best summed up the way forward when she said: "history we inherit -the future is ours". Women linked to the trade union and labour movement can ensure that in the coming period these words can at last become a reality.