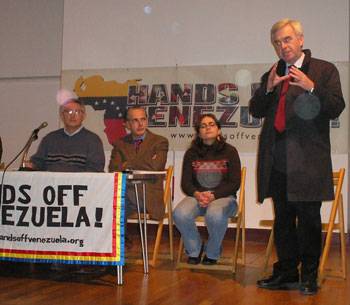 No sooner has the dust started to settle on the fall out from the 2010 general election and the decision of Gordon Brown to fall on his sword both as Prime Minister and Labour Party leader than we are already seeing names being put forward as “suitable” choices to become the new leader of the party.

Once again the national press has stepped forward to let us poor souls know who they think should get the job. After John Smith’s death (in 1994), they told us that Tony Blair was the man. Then they said that Gordon was best. Now fresh from telling everybody to either vote Tory (conservative) or Lib Dem (liberal), these experts have come up with a variety of names but in truth no real choice.

So far the media has felt fit to push forward the likes of Ed Miliband, David Miliband, Ed Balls (who is expected to throw his hat into the ring this week) and maybe John Cruddas. Despite all the talk of having a real debate this time and “listening” to what the people have to say about the election result and where we need to go from here, the reality is that all these so-called choices are in fact the continuation of Blair/Brownism and the failed policies of New Labour by another name. All the main contenders served in the last government and backed its policies. They are all pledged to continue the pro-big business line that is at the heart of the New Labour Project and which has resulted in millions of voters deserting Labour in election after election. As we have explained elsewhere, the only reason Labour did not do far worse in the elections just gone was because many workers understood what having a Tory government would actually mean and voted accordingly. Although John Cruddas has chosen to position himself slightly to the Left of the main contenders, this has been more about trying to establish a base inside the party rather than expressing any real differences with the others.

However one name has not been mentioned at all, that of John McDonnell. He was the only serious person to stand up against the election-without-an-election of Gordon Brown and offer a real choice to party members. Despite a long and vigorous campaign inside the movement, when the time came the party apparatus moved heaven and earth to keep him off the ballot paper. Brown and his supporters were afraid of the debate that would have taken place had John been on the ballot and of what the final vote might have been. This must not happen again. 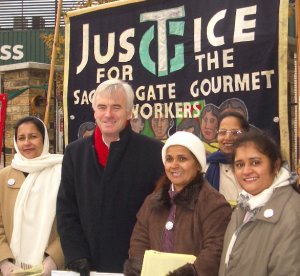 John McDonnell supporting striking Gate Gourmet workers. John has decided to put himself forward again and on Saturday the National Committee of the Labour Representation Committee (LRC) agreed 22-0 to support this. However under party rules, he will need to get the support of over 30 Labour MPs (members of parliament) if he is to be on the ballot. We call on all CLPs (party branches) and affiliated organisations to start nominating John as a candidate and to start putting pressure on the MPs to nominate John when the time comes. This campaign will be an excellent opportunity to raise the real questions that need to be discussed inside the movement in the coming period as we survey the wreckage of New Labour. We should reiterate the warnings we made before the election about the need for Labour to change course, bring in a fighting leadership and arm itself with a socialist programme that will tackle the problems of society. As part of this, we demand a real election for Labour leader with a real choice this time – support John McDonnell!