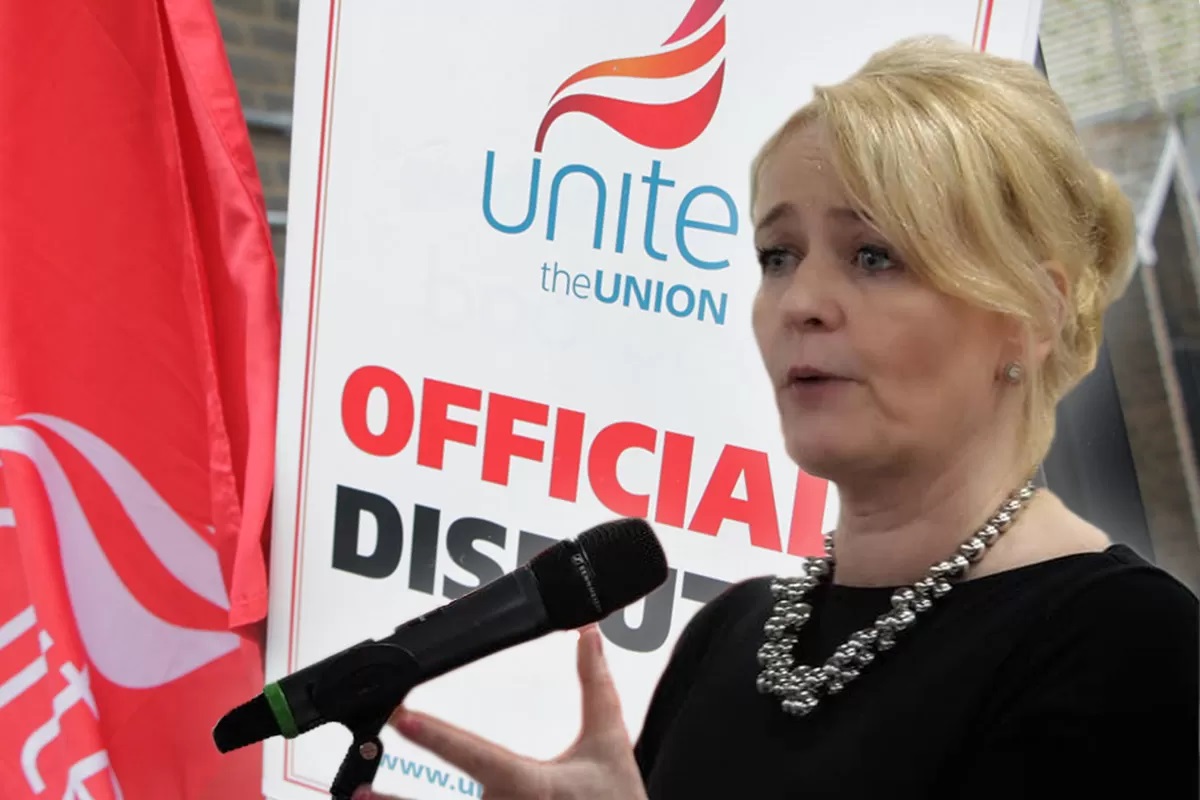 Left-winger Sharon Graham has won the race to become general secretary of one of Britain’s biggest unions, Unite, which has almost 1.3 million members. She did so by appealing to rank-and-file members with a promise to defend jobs and conditions. This early tremor is a sign of the earthquakes that will shake the trade unions from top to bottom.

Sharon Graham, the left-wing ‘underdog’ in the Unite general secretary contest, has secured a welcome victory, defeating the right-wing candidate, Gerard Coyne, to become the leader of Britain’s second-largest union.

This win is a major blow to the establishment and the so-called ‘moderates’ in the labour movement, who were hoping that their candidate – right-winger Coyne – could squeeze through the middle in this three-horse race.

Graham’s success was possible thanks to her campaign’s strong support amongst grassroots Unite members – particularly those in rank-and-file groups in sectors such as construction.

Her victory will give confidence to workers moving into struggle, with her pledge to use Unite’s muscle to fight all the way to defend jobs, pay, and conditions.

With Unison, the country’s biggest union, also moving to the left recently, it is clear that an upheaval is beginning to take place inside the trade unions.

Along with other left-led trade unions – such as PCS, CWU, FBU, and BFAWU – the new left leaderships in Unite and Unison must prepare for the big battles ahead, on the basis of a united approach and a fighting programme.

Following early indicators of a Graham win, the final results were announced today, confirming her victory.

Graham received 37.7% of the vote, with second place going to Steve Turner, who had been the bookies favourite until yesterday. Turner and Coyne gained 33.8% and 28.5% respectively, on a turnout of approximately 12%.

These results must be seen, above all, as a huge victory for the left, with Graham and Turner gaining over two-thirds of the vote, and with Coyne trailing in third place. This reveals the radical mood amongst union activists, who are facing attacks across the board.

Graham positioned herself as the grassroots choice. She previously headed up the union’s organisation department, where she proved her credentials in supporting workers’ struggles, playing a key role in victories such as the Bromley library strike and the recent Manchester bus drivers’ fight against ‘fire and rehire’.

It was this proven track record – along with her support for rank-and-file union activists in battles such as the BESNA dispute, the sparks’ struggle against deskilling, and the anti-blacklist campaign – that helped to differentiate her from the other candidates in the eyes of ordinary members.

Although on the left, Turner positioned himself as the ‘pragmatist’; someone who could negotiate with the bosses, the Tories, and the Labour right wing in order to secure a better deal for workers.

He was very much seen as the ‘continuity’ candidate, with the explicit backing of outgoing general secretary Len McCluskey.

Turner’s compromising attitude did not fundamentally change throughout his campaign, even after Beckett – who had run on a promise to fight militantly on both the industrial and political fronts – stepped aside and encouraged members to vote for Turner.

Graham’s ‘workplace not Westminster’ campaign, by contrast, clearly struck a chord with ordinary Unite members: firstly, with promises to fight over immediate issues such as jobs and wages; and secondly, by tapping into the disgust towards Keir Starmer and the Labour right wing, who have spent more time attacking the left than attacking the Tories.

While we welcome Sharon’s victory, we should nevertheless avoid complacency in future elections. There was a real danger in this election that the left vote could have been split, allowing the right wing candidate to win.

That was the case with the recent Unison general secretary election, which robbed the left of victory. In future, the left must ensure a single left candidate, committed to a fighting programme in defence of the working class.

Having secured the Unite general secretary position, Graham will be thrown in at the deep end when it comes to defending workers, given the sharp crisis of capitalism.

Union members are already engaged in battles across industry, and in the public sector: from bus drivers to bin workers to British Airways; from the NHS to local government. And this is before the deluge of austerity and attacks hits.

In the face of this coming tsunami, the union leaders will face a stark choice: fight or capitulate. Having run on a commitment to protect jobs, pay, and conditions, expectations will be raised amongst members, who will demand that Graham delivers on her promises. 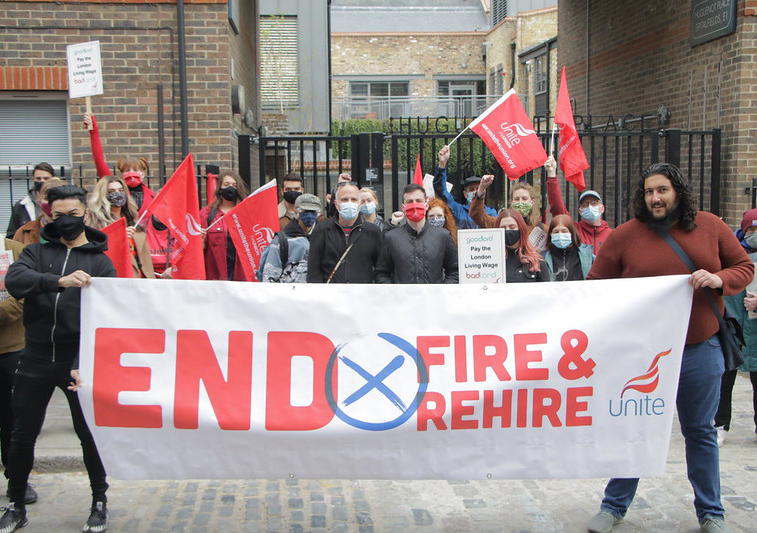 Workers are bracing for a new wave of austerity. Already, the bosses are attacking workers, who are being forced to defend themselves against 'fire and rehire' and other methods to undermine pay and conditions / Image: Socialist Appeal, Flickr

The only way to fight back against the bosses is on the basis of mobilisation, organisation, and action around a bold militant programme.

It is not enough, however, for the unions to limit themselves to the industrial struggle, as Graham suggests. The working class also needs a clear political alternative to the Tories – and this means fighting to remove the rotten Labour right wing

There is no Chinese wall separating the industrial and political struggles. We want a fighting trade union movement, but we also want a real socialist Labour Party. Both go hand in hand.

The task still remains to clear out the Blairites from the Labour Party. And the affiliated trade unions should not forsake their responsibility in this regard.

You can try to avoid engaging in political struggle, but politics will eventually come knocking at the door.

Unite, for example, represents workers in the public sector, including various outsourced workers delivering services such as refuse collection for local councils. In many instances, it is right-wing Labour councillors who are engaging in fire-and-rehire practices; or who are handing out contracts to bullies such as Serco.

In these cases, workers – and the Unite officials who represent them – will find themselves coming into conflict with Tories and Labour right-wingers, who must be actively replaced with class fighters.

Similarly, Unite is the main union in most industrial sectors. And many workplaces in these industries – from steel, to shipbuilding, to car manufacturing – are under threat of closure, as British capitalism reels in the face of Brexit, economic slump, and long-term decline.

The only solution for defending workers and their jobs in these industries is nationalisation and workers’ control, as part of a socialised economic plan. But clearly, neither a Tory government nor a Blairite Labour one will call for such a demand.

The political struggle is therefore not a “secondary issue”, as Graham suggests, but an essential question for workers looking to fight back against the bosses and the Tories. And Unite, with its significant weight inside the labour movement, has an important role to play in this process.

Capitalism is plunging deeper into crisis. The class struggle is sharpening. The battle lines are being drawn.

Faced with the bosses’ offensive, workers are beginning to move into action. And they are looking for a fighting leadership that can point the way forward.

The victories for Sharon Graham in Unite and for left-wing NEC members in Unison are an indication of the real mood amongst the working class; a reflection of the volatility within society, and its impact on consciousness.

The challenges are massive. Unite and Unison must therefore link up with the other left unions to forge a genuine united front to defend the working class. There has never been a more vital task. 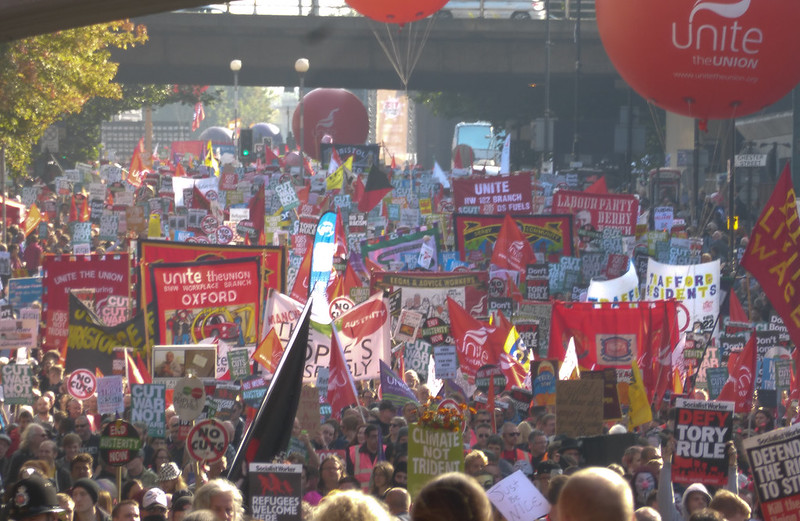 The crisis of capitalism is sharpening the class struggle, and workers are drawing radical conclusions. The victory of Graham, coupled with the left victory in Unison, are the tremors preceding an earthquake that will shake the unions from top to bottom / Image: Steve Eason, Flickr

These recent changes at the top of Britain’s two largest unions are also only the beginning; a harbinger of far greater transformations to come; early tremors, signalling the earthquakes that will shake the trade unions and the labour movement from top to bottom.

In the process, they will become key weapons in the struggle to change society.

The urgent task at hand is to build the forces of Marxism – inside the unions, on the streets, and amongst workers and youth – to prepare for these titanic events that lie ahead.