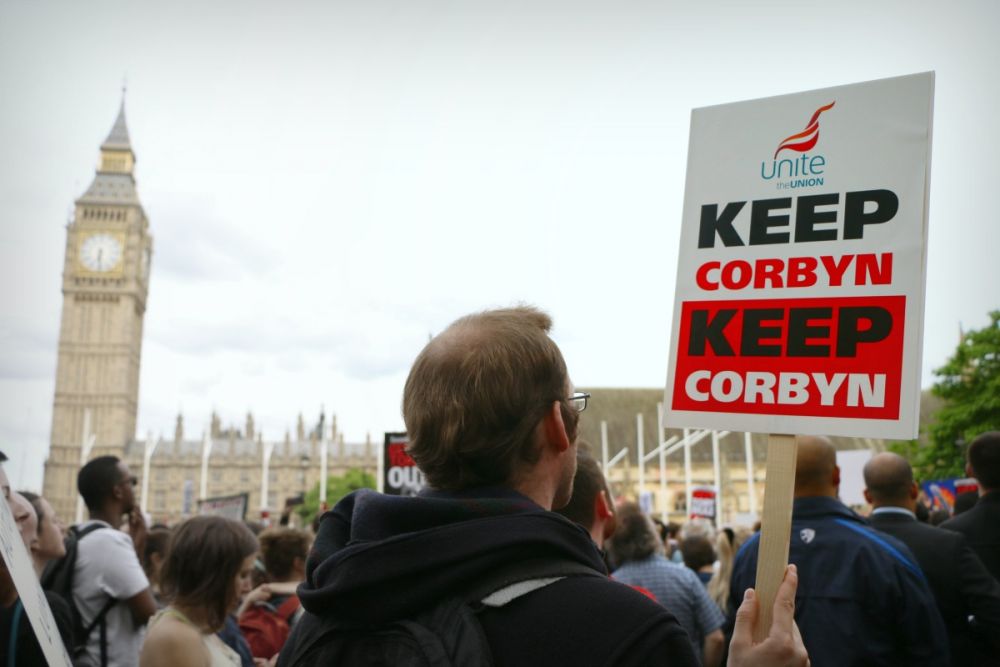 The focus of the class struggle in Britain is undoubtedly now centred on the battle inside the Labour Party between the Corbyn movement, on the one side, and the Blairites - backed by the entire Establishment - on the other. Any analysis regarding the tasks of the trade unions at this time must begin from this fact.

Under the Tories, the trade union leaders have made one concession after another in the defence of jobs, pay, and pensions. Apart from a few exceptions, the whole period has been characterised by a series of retreats. Talk of a one-day general strike never materialised into anything; actions have been generally limited to periodic national demonstrations and one-day strikes, largely to let off steam. Even the new anti-trade union laws brought in by the Tories were pushed through with little resistance.

Importance of the political front

As in Greece, Spain, and even the USA, however, given the weakness on the trade union front, workers and youth have begun to draw conclusions about the need for a political solution to their problems. This recognition of the limits of industrial action and isolated protests, and the need for a political alternative for the working class, represents a positive step forward for the movement.

This process eventually found its expression in Britain with the election (and re-election) of Jeremy Corbyn as Labour leader. Ever since, it is clear that the attention of the labour movement has been turned towards the political front, rather than the industrial front. We must see developments in Unite in this wider context.

Len McCluskey’s election as general secretary of Unite in 2010 was seen as a shift to the left for Britain’s biggest union. Industrially, results have been mixed: support given to - and victories gained for - blacklisted workers, rank-and-file movements in construction, and super-exploited employees at companies such as Sports Direct has been balanced out by humiliating defeats in cases such as Grangemouth, where the union leadership was seen sitting on their hands and calling for compromise as the bosses took a knife to workers’ jobs, terms and conditions.

As a result, there are clearly frustrations amongst a layer of grassroots union members regarding such inaction, as well as with the democratic deficiencies within the union. These were reflected in the large share of the votes gained by Jerry Hicks - a left-wing rank-and-file candidate - in the 2010 and 2013 elections for Unite general secretary, who gained 23% and then 36% of the vote respectively by standing on a programme that called for the election of all officials and a promise to only take the wage of an average skilled worker.

It is on the political plane, however, that McCluskey’s influence has been more noticeable. Unite’s support was key in defeating the Blairite candidate, David Miliband, in the 2010 Labour leadership contest, and more recently in securing successive victories for Jeremy Corbyn. Even under Ed Miliband, McCluskey held the line against ultra-left attempts to pull the union away from the Labour Party, countering such calls with his own attempt to send 5,000 Unite activists into the Party to wrestle control from the Blairites.

Despite the initial support for Andy Burnham by McCluskey, under pressure from below, the Unite leadership eventually gave their backing for Jeremy Corbyn in the 2015 leadership contest. The full weight of the union was then put behind Corbyn, with the Unite offices across the country being handed over to the “Corbyn for leader” campaign for phone-banking and other activities. It is an unspoken fact that Unite calls the shots amongst the trade unions; McCluskey’s support for Corbyn therefore set the tone for the rest of unions, the majority of whom then also came out behind the anti-austerity candidate, delivering 58% of the 41,000 votes from affiliated supporters. 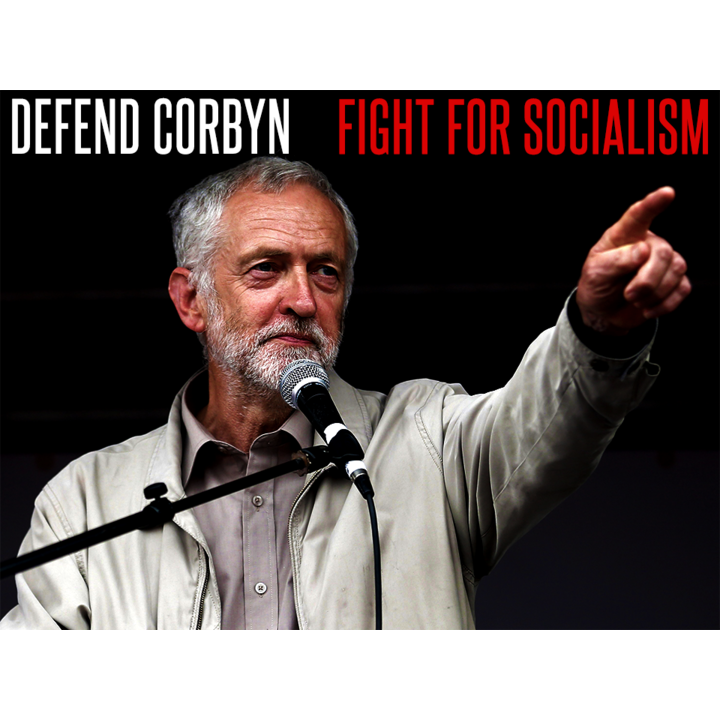 But the real turning point was the Blairite-orchestrated “chicken coup” against Corbyn. Even at this point, it was evident that McCluskey was initially attempting to play the role of mediator between the Corbyn movement and the Labour right-wing, embodied in the figure of Tom Watson, the infamous head-basher and formerly-Unite-backed Labour deputy leader. Nevertheless, as a result of the Blairites’ arrogance and intransigence, talks broke down and relations between Watson and McCluskey - former friends and flatmates - quickly soured.

In a series of interviews, articles, and statements, McCluskey came out firmly in support of Corbyn and against the back-stabbing behaviour of the Blairites. In fact, such were the provocations of Watson and the other coup plotters that the Unite Executive even came out in support of a motion at the Unite policy conference calling for mandatory reselection of Labour MPs, swaying the vote in favour of the motion.

Without Unite’s backing at this vital juncture, Corbyn could well have lost the support of the other major unions. And without the backing of the unions, it is likely that Corbyn would have been forced to resign. The movement would have been dealt a shattering blow.

At a time when other leading so-called “lefts”, such as Owen Jones, have vacillated in their backing for Corbyn, McCluskey’s firm and vocal support at key moments is therefore to be applauded. Furthermore, with Labour’s civil war continuing to rumble under the surface, Unite are continuing to play a leading and active role in attempting to secure Corbyn’s position in the Party, organising union activists and sending them in at a local level.

The Unite leader has now called for a new union election in order to secure his mandate for a further five years, and thus put him at the union’s helm to play a prominent part in Labour’s 2020 general election campaign.

The pivotal role played by Unite and McCluskey in supporting Corbyn, however, has not gone unnoticed by the Blairites, who are turning this union leadership contest into a proxy war for the future of the Labour Party - “something of a proxy battle in the struggle for Labour's soul”, as the BBC accurately described it.

Watson and his cabal in the PLP have given their clear backing to the right-wing candidate, Gerard Coyne, the current Unite regional secretary for the West Midlands, who is standing on a programme of “focussing on the concerns of our membership” and de-politicising the union. “I believe”, Coyne has stated, “[that the Unite membership] want a general secretary who spends less time trying to run the Labour Party and more time looking after their interests.”

Coyne’s challenge is correctly seen on both sides as a right-wing attempt to diminish Unite’s role in the internal political affairs of the Labour Party, to the benefit of the Blairites. The mainstream media, representing the anti-Corbyn interests of the Establishment, have already jumped on the bandwagon, giving Coyne an abundance of column inches and attempting to slander the incumbent. In the Guardian, for example, McCluskey was described as being “a Militant sympathiser in the 1980s”, and the same paper purposefully misrepresented the Unite leader and his views on the free movement of labour in an attempt to drive a wedge between him and left-wing union activists.

It is in this context that we see the entrance of Ian Allinson into the Unite leadership contest, standing as the “grassroots socialist candidate”, and offering a break from “more of the same” under McCluskey and attempts “to turn the clock back to the bad old days” by Coyne.

Allinson is undoubtedly a genuine trade union fighter who has rightly earned respect amongst his peers for organising under difficult conditions for 25 years at Fujitsu. On many important questions - fighting anti-trade union laws; coordinating industrial action; the defeat at Grangemouth - Allinson has correctly pointed out the limits of the current Unite leadership, highlighting their lack of militancy and strategy.

At the same time, however, we must be absolutely honest: standing as a third candidate in this vital election has the potential to split the left vote. Under the circumstances, this would be irresponsible to say the least. As has already been stressed, this leadership election has become a proxy for the wider battle in the Labour Party, which in turn must be the focal point for the labour movement at this time. To hand the right wing a victory in this situation by dividing the left vote would be criminal.

Whilst Allinson makes many valid and correct criticisms of McCluskey, he fails to address what role Unite should play in the current Labour civil war. “Backing Corbyn through the Labour Party structures is not enough,” Allinson states, going on to say that, “His [Corbyn’s] best chance of success is if there is a real movement of resistance to Tory policies at a grassroots level… ‘Wait for Jeremy’ is not good enough when our rights, jobs and services are under attack every day.”

But by over-emphasising the “movement of resistance to Tory policies” and relegating the current political battles inside the Labour Party to a secondary question, Allinson risks separating off the most politically advanced and active layers of the trade unions from the wider movement in a sectarian manner. Indeed, Allinson’s slightly dismissive attitude to this important issue is, as noted by McCluskey, demonstrated by the fact that the “grassroots” candidate is not even a member of the Labour Party himself.

Allison is correct in noting that, whilst not explicitly calling for restrictions on the free movement of labour, as the Blairites such as Tom Watson now do, McCluskey and other similar Lefts do frequently express “concerns” about the “pressures” of uncontrolled migration, failing to place the blame for the shortage of jobs and housing directly on the bosses and the Tories’ austerity.

In reality, McCluskey’s position - whilst influenced by Unite’s general shift towards protectionism and the Stalinist chauvinism that pervades the British trade unions - is very similar to that of some of those around Corbyn, such as Clive Lewis MP: demanding “new safeguards that would ensure any employer recruiting from abroad must be covered by a proper union or collective bargaining agreement” and “stopping companies cutting costs by slashing workers’ wages and transforming a race-to-the-bottom culture into a rate-for-the-job society.”

In this respect, whilst Allinson’s position on various points may be correct, on the key question in the class struggle in Britain - that of Labour’s civil war - it is actually McCluskey who has the better position, albeit reached in the empirical manner.

For this reason, we believe that Allinson is making a big mistake in standing, and that the left in Unite should rally behind McCluskey - and, in turn, that the trade union movement must rally behind Corbyn.

Our support for McCluskey is very critical support. Whilst highlighting the deficiencies that remain within Britain’s largest union - the lack of union democracy, the backsliding, and the lack of militancy, for starters - we also call for the Unite leadership to boldly move forward in the fight to change the Labour Party: to get organised and active inside the Labour Party; to kick out the Blairites through mandatory reselection; and to transform the Party into a mass political movement capable of bringing down the Tories, ending austerity, and fighting for socialism.