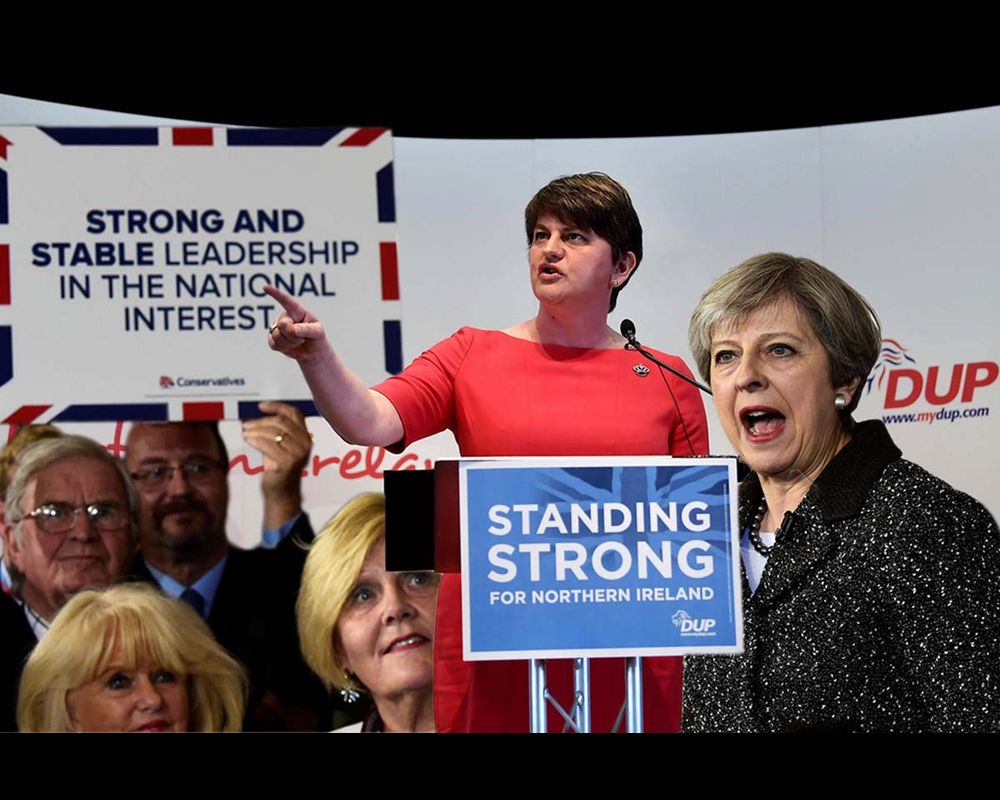 After a thin Queen’s Speech and long negotiations, Theresa May and DUP leader Arlene Foster finally appeared outside Downing Street earlier this week to shake hands on the deal that will keep May in power - for now.

According to the conditions of the deal, Northern Ireland will be given £1.5 billion for extra spending, £1 billion of which is new cash, and key Tory manifesto pledges will be shelved. These include scrapping the pensions triple lock (at a cost of £7 billion to government coffers) and changes to winter fuel payments (8.5 billion) – both of which would have hit the DUP’s ageing working class base hard – amongst other changes.

In return, the DUP have promised to support the government in “all motions of confidence; and on the Queen's speech; the Budget; finance bills”, as well as Brexit-related legislation. However, the DUP will continue to hold the government over a barrel on all other legislation and will be certain to gain new concessions out of this weak government – if it lasts at all. With everything factored in, the ‘price’ that May has paid to stay in government is astronomical.

One DUP MP laughed while they were going into negotiations that they were “going shopping”. It is no wonder that Arlene Foster was beaming when she left Downing Street as she returns with her bags full.

May, the lame duck

Even before this agreement, May was already labelled a “dead woman walking” and a “lame duck Prime Minister”. Publication of the three-page document on the deal has opened her up to the anger, contempt and mockery of the most varied critics. As if her propensity to vacillation and U-turns had not been made sufficiently clear already, her latest U-turns leave one questioning: what is left of her election pledges?

The Evening Standard, under the editorship of former Tory chancellor, George Osborne, published a withering attack on its front page (27th June 2017) comparing Arlene Foster to Austin Powers super-villain, Dr Evil, and the Prime Minister as Mini-Me. The editorial denounced cash for votes, “worth about £96 million for each of the 10 Northern Ireland MPs,” citing Sadiq Khan and others’ denunciations of this “pork barrel” politics.

A number of Tory grandees have let rip on Theresa May, including former party chairman, Lord Patten, who pointed out that, “every vote will cost you!” In the ITV interview, he went on to mock May’s ineptitude with the public, and characterised the crisis faced by the British ruling class as worse than the anything faced in the 70’s and even “the worst […] since Suez, though maybe even worse than that because Suez was the end of an era, it was the end of our colonial aspirations […] the European Union was our replacement for that colonial role.”

Other ruling class commentators have pointed out that the DUP would never have brought down this government when faced with the alternative of a Corbyn-led Labour government. The Establishment throw their hands up at the stupidity of their own political representatives, and yet it is clear that they cannot get rid of May, as to do so would open a leadership contest that would be a signal for civil war inside the Tory party and, in turn, the imminent possibility of Corbyn taking residence in 10 Downing Street.

Already Brexit negotiations have opened up deep schisms within the Tories. Chancellor Philip Hammond has been rumoured to be plotting against May whilst laying out his own plans for a “soft Brexit”. Meanwhile Brexit secretary, David Davis, remains on course for a “hard Brexit”. The party, and the ruling class, are split at precisely the time when they need bold and united action to tackle the deepest crisis British capitalism has faced in modern history. They are split precisely because of this crisis.

This short-term solution to the political bind that the Tories find themselves in at Westminster will have a long-term impact in continuing to destabilise the political situation in the Ireland. In the first instance, it is highly doubtful that much benefit will be seen from the huge sums that have been thrown at the Northern Irish government. The “Ash for Cash Scandal”, only the most recent among numerous scandals engulfing the DUP, cost £500 million alone – all of it making its way into the pockets of big business, and much of it into the pockets of the DUP’s friends.

If the prospects of restoring power-sharing in the North were not already dim enough, they have become utterly bleak now. With the DUP propping up the government on Brexit, refusing to back down on opposition to an Irish Language Act, and the likelihood of further concessions as new votes come up in Westminster, Sinn Fein have no interest in reforming an Executive at Stormont.

When May was asked during the election campaign why nurses had to suffer pay cuts, her contemptuous reply was that “there is no magic money tree”. This winged phrase has now returned to haunt her, as it seems there is no limit to the money that can be thrown at the DUP.

But why not Wales, or Scotland, or the North East, or the NHS? This is precisely the question that Jeremy Corbyn, John McDonnell and the Labour Party are now asking. Sensing the weakness of the government, Corbyn’s Labour Party – in the wake of the Grenfell disaster – has tabled its own amendment to the Queen’s Speech calling for an end to the public sector pay freezes that have been in place since 2010. Remarkably, May has already hinted that she may back down without a fight on this question too!

That the government can suddenly stump up billions of pounds to keep itself in power has caused Corbyn to reiterate the point that austerity is a political choice. In a sense, this is most certainly true - but it is a ‘choice’ taken in the interests of the capitalist class and the maintenance of a Tory government that defends their system.

The money is clear there, as these events have shown. However, further spending in one area will likely be paid for by a mixture of cuts in other areas and increased borrowing. As the government’s debt-to-GDP ratio surges towards 90% (having been below 40% during the pre-crisis period), and with the economic ‘recovery’ having almost certainly exhausted itself, new borrowing would leave the ruling class dangerously exposed in the face of a new world slump.

As Trotsky stated in the 1920’s, in periods of crisis all attempts by the capitalist class to shore up a temporary political equilibrium have the effect of destroying the economic equilibrium, and vice versa. This latest rotten deal between the reactionary DUP and the Tories - and its impacts - are a clear indication of Trotsky’s assertion.

The fact that May is forced to throw money at her political problems, however, is a sign of the most pathetic weakness of her, the Tories, and the Establishment they represent. This vulnerability must be pushed home by the entire labour movement, beginning with the national demonstration this Saturday (on 1st July). Through mass mobilisation on the streets and in workplaces, schools and colleges it is possible to force May out and put a socialist Labour government in power.