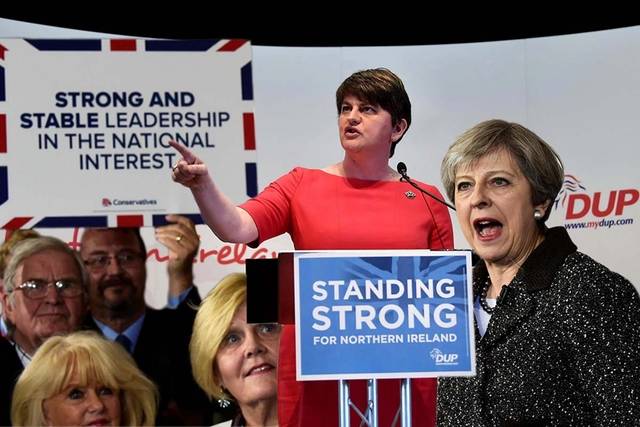 The shock result of the June 8th election, called by Theresa May with the intention of strengthening her position, has left the Tories without a majority and May’s political career in tatters. Like a drowning woman, she is now clutching at straws in a desperate bid to cobble together a government. The result is likely to be a deal with Northern Ireland's Democratic Unionist Party (DUP), with the leaders of both parties meeting today to discuss the terms of a Westminster alliance.

Since the ceasefire in Northern Ireland and the signing of the Good Friday Agreement, Northern Ireland has remained largely out of the newspapers and off the TV in Britain. This is as the ruling class would like things: out of sight and out of mind. Unfortunately for them the instability of British politics means this can no longer remain the case.

Upon waking up on June 9th millions of people have been horrified to discover that a key partner in government will be a party of homophobic, anti-abortion, climate change denying bigots...and we are not just talking about the Tory Party. Many are now asking themselves two questions: who are the Tories' new bedfellows? And what can be expected of this "coalition of chaos"?

Of course, the utterly reactionary and sectarian nature of the DUP has been a daily fact of life for the people of Northern Ireland. However, it is worth recounting the history of the DUP for those who aren't aware of this party’s sordid past.

The ugly face of sectarian reaction

The British ruling class carved out the sectarian statelet in the North of Ireland principally for strategic reasons in the wake of the Irish War of Independence. The entire basis of British rule was founded upon sectarian divisions between Catholics and Protestants. By the 1960's, however, Britain’s strategic interests in Ireland had moved on but the sectarian quagmire it created had not. Northern Ireland no longer had the same importance to the ruling class that it once had. However, once the British ruling class had whipped up sectarianism, they found themselves confronted by a monster that they could no longer control. 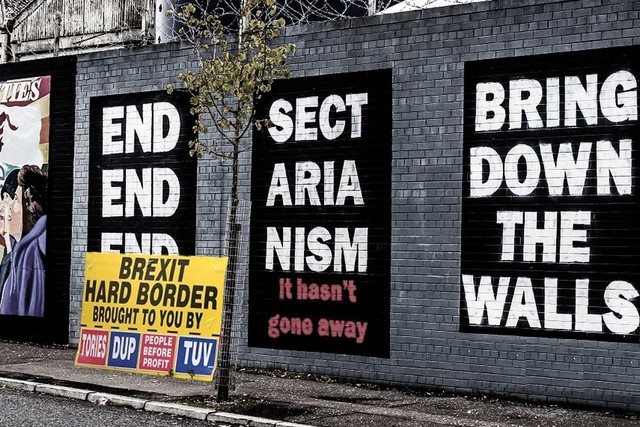 No-one typified the monstrous features of this loyalist sectarianism better than the Rev. Ian Paisley, the founder of the DUP. Paisley was a founder of the fundamentalist breakaway Free Presbyterian Church in the 1950’s. Beginning as a street preacher in Wales, he discovered an early talent for oratory and in particular a knack for manipulating mobs.

At loyalist rallies and at the pulpit, Paisley regularly preached violent hatred against Catholics, who he denounced as "breeding like rabbits and multiplying like vermin". When the Civil Rights movement in the late 1960's threatened to turn in a revolutionary direction, the ruling class began preparing to make concessions to forestall such a movement. Paisley and his followers saw in this only treachery and he denounced in biblical language the Judases preparing to give in to the Anti-Christ. The mad sectarian dog began to bite the hand that had fed it.

In his frenzied way, Paisley helped to incite gangs of loyalists to brutally attack Civil Rights marches wherever they went. His insane rants were one factor in preparing a pogrom atmosphere against the Catholic population. Thousands of Catholic youth turned to the IRA in self-defence; meanwhile the British Army was deployed on the streets of Northern Ireland, supposedly to protect the Catholic population. So began a 25 year cycle of bloodshed.

In 1970, as he grew to prominence due to his chilling calls to bloodshed, Paisley was elected MP for North Antrim and in 1971 he established the DUP as a political force, basing itself on his fundamentalist message, to challenge the main party of the unionist bourgeoisie, the Ulster Unionist Party (UUP).

In all respects the DUP represented the distilled essence of all the reactionary poison that the ruling class had poured into the North of Ireland. Besides its virulent British loyalism and its hatred of Catholics, there was its paramilitarism - which went as far as the establishment by leading DUP figures of their own outfit, the Ulster Resistance, in 1986. The DUP held (and still does hold) fundamentalist views taken straight out of Leviticus on all social issues, from LGBT rights to abortion.

The rise of the DUP in unionism

Throughout the period of the Troubles, Paisley and the DUP fanned the flames of hatred into a bloody inferno. After the Good Friday Agreement (GFA) negotiations, Paisley obdurately refused to recognise the power-sharing Executive. However, the ruling class paid little heed; the mood across the North of Ireland was strongly for peace and the reliable UUP remained the biggest political force in the unionist camp. Far from settling sectarianism however, the GFA only institutionalised it. Meanwhile sectarianism has continued to be fed by poverty, deprivation and alienation - all of which have become worse as the crisis of capitalism becomes more acute.

The result has been a growing polarisation, with the more "hardline" sectarian parties gaining at the expense of the "centre-ground" parties, and in 2005 the DUP emerged as the biggest party in the Stormont Assembly, leading to a temporary crisis until they agreed, under pressure from British and US imperialism, to enter into coalition with Sinn Fein.

The most recent elections confirm this process of polarisation. Whilst in 2015 the DUP and Sinn Fein took 12 of the 18 Westminster seats between them, on June 8th that increased to 17 out of 18 seats. However, these figures do not reveal the full picture. In actual fact unionism has never been in such a deep crisis as it is currently in. Unable to offer any material improvements to the lives of ordinary Protestant workers and with the leader of the DUP, Arlene Foster, mired in corruption scandals, the party has been left with only one string in its bow: to ramp up its bigoted and sectarian behaviour.

Meanwhile this has had the effect of shattering the power-sharing agreement with Sinn Fein and has served to politicise growing layers of nationalist youth.

The new parliamentary voting deal between the Tories and the DUP will snuff out once and for all any possibility of the restoration of power-sharing at Stormont. Direct rule from London will return to Northern Ireland for the foreseeable future and under the most foreboding circumstances for British capitalism.

A coalition of chaos

British capitalism now faces the most unstable period in its history. Contradictions inside the Tory Party caused Cameron to gamble on the EU referendum. He lost. Contradictions inside the Tory Party caused May to call an early election. It has backfired spectacularly. The only thing worse for the ruling class than staggering on with Brexit negotiations with a weak, May-led Tory-DUP coalition, would be a Corbyn government. Any new election would surely bring the latter to pass.

However, the Tories may live to regret the day they decided to join hands with the DUP. Formally it seems to make sense: both parties are in favour of Brexit (and vehemently anti-Labour). However, beyond these points of agreement, a whole series of contradictions threaten to tear them apart.

Firstly, the Tory Party remains utterly split on Brexit. Under pressure from big business in the North of Ireland, the DUP has adopted a compromise position. Whilst it is virulently anti-EU, it must also oppose the imposition of a hard border, which would be ruinous for business. To achieve the latter will require a softening of Britain’s Brexit stance - something which will be anathema to the Little Englander Tory ranks for whom “no deal is better than a bad deal”.

Meanwhile the DUP will be demanding a high price for its cooperation in Westminster: possibly including more spending for Northern Ireland and concessions on points where it differs from the Tories, including winter fuel allowances, pensions, abortion limits and LGBT rights. Of course any extra cash that the Tories do send the DUP’s way will go straight into lining the pockets of their mates, as we have seen time and time again. Ruth Davidson, the leader of the Scottish Tory Party, has already come out seeking assurances against concessions on social questions and the prospect has been raised in some quarters of a fissure opening between the Scottish and British parties.

Secondly, the consequences in the North of Ireland have the potential to be destabilising in the extreme. The entry of the DUP into a Westminster government, which will now be directly running affairs in the North of Ireland, has killed off whatever life might have lingered in the GFA. The demands by Sinn Fein for special status for the North will be completely ignored as a DUP-Tory position is presented before the 27 other EU states in negotiations.

Although the DUP has been the biggest party in Belfast until now, it has been able to deflect responsibility for unpopular policies to Westminster or to its junior partner in the Northern Ireland Assembly. Now it must take full political responsibility for the fallout, and we can expect the DUP to suffer a similar fate to the Tories when Brexit turns into a much-anticipated debacle.

What will fill the vacuum when the DUP is exhausted as a political force? The question is an open one with an unpredictable answer - there are a whole number of far-right parties on the flanks of the DUP, preparing to hoover up their support. A far more important factor however is the working class in the North of Ireland, which is yet to place its stamp on the course of events.

Meanwhile, in Catholic communities there is a growing resentment against their denial of equal treatment, the sectarian attacks of the DUP, and ongoing austerity. This mood of anger will grow and grow as the Tories ride roughshod over the rights and living conditions of the working class.

As we can see, the epithet “coalition of chaos” is quite appropriate - its effects will be disastrous for British capitalism and the North of Ireland in particular. Sooner or later it will be blown apart by events.

It is the task of the labour movement to assist in smashing this coalition from day one. Corbyn has already gone on the offensive and thousands have already demonstrated in cities across Britain against the coalition. It is necessary to step up this action and give it a coordinated character.

The ballooning of the Labour Party and the development of huge grassroots movement of radicalised workers and youth has created a mass force in British politics, which must now be mobilised on the streets. The trade union leaders too must play their role and prepare the ground for a day of united action against the coalition as a means of preparing the working class for a general assault against the government. The DUP-Tory lash-up is a sign of weakness on the part of the ruling class - the “coalition of chaos” can be beaten!