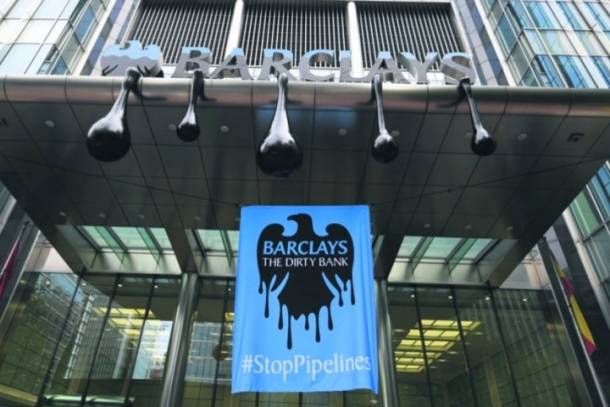 British left-wing organisation Momentum has launched a national campaign calling on banks to divest from fossil fuel corporations. And the Labour Party has launched its own call for a Green New Deal. This highlights the need for public ownership of the monopolies.

This weekend (30/31) Momentum will be organising over 40 protests outside branches of Barclays bank nationwide. They have launched this initiative to pressure Barclays to stop funding the fossil fuel industry. As they explain,

“Rather than digging more coal mines, drilling more oil fields and building more pipelines, we need to radically transform our energy infrastructure and build a green economy for the many.

“In order to win this fight, we need to take on the banks. Although fossil fuel companies have a lot of money, they don’t have the billions of dollars needed to build their infrastructure. This is financed by banks, who could be investing in renewables instead.

“One of the biggest culprits is Barclays. Between 2012 and 2017 Barclays financed 15 fossil fuel companies with over $30bn, including corporations pushing ahead the plans to develop the fracking industry in the UK.”

The fossil fuel monopolies and the banking giants are so close it is hard to tell where one starts and the others ends. These two industries dominate and, in effect, direct the world economy. They exploit the world - both its natural resources, and its human beings - in order to make their obscene profits.

Indeed these protests should go way beyond Barclays, and way beyond the demand for divestment in fossil fuels. Everybody knows the banks wrecked the world economy in 2008 - an event which has changed history and resulted in worldwide austerity policies. Even Lord Turner, chair of the Financial Services Authority, said in 2009 that the financial monopolies were engaged in ‘socially useless activity’.

On top of this, the banks have been embroiled in endless scandals. This includes: the rigging of LIBOR (London Inter-bank Offered Rate); collusion in massive money laundering at HSBC and many other banks; the fraudulent selling of payment protection insurance to thousands of small businesses; and awarding staggering bonuses - Barclays’ own Bob Diamond was paid £17m in bonuses after tax in 2011!

That Momentum has taken this initiative to link pollution and climate change to the financial nerve centres of capitalism is very good. But how should Momentum conduct this campaign? What activity would be the most effective? And what political demands should we be raising? 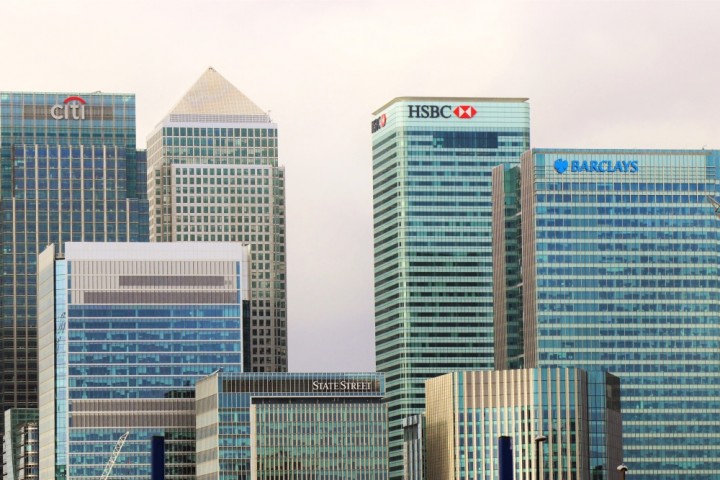 Instead of placing a demand on Barclays to ‘divest’ from fossil fuels, however, we should campaign for the British Labour Party to nationalise the banking sector.

Firstly, it is very unlikely that Barclays will come under sufficient pressure from Momentum activists to divest from fossil fuels, which are extremely lucrative since they are integral to the world economy. To be frank, Barclays doesn’t care what Labour activists think about it, and without any threat of nationalisation it has little to fear in terms of its profits.

Even if this worked and Barclays did divest entirely, there are plenty of financial institutions that would then spot an opportunity and take their place. Nothing would change.

What is needed is not specifically for Barclays to divest, but for a fundamental change to take place in the economy.

Secondly, investing in fossil fuels is only one of a vast portfolio of exploitation and crimes committed by Barclays and other banks. Nationalisation is the only way to take control of these operations in order to transform them entirely - that is, to meet social needs, including protecting the environment, and not private profits. 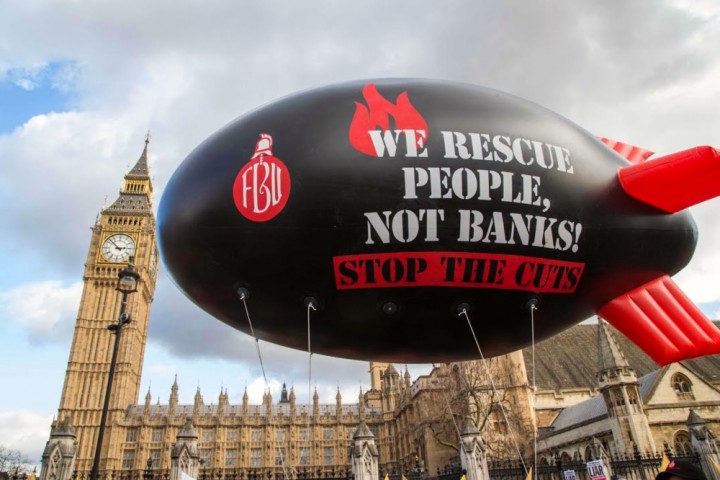 There is no reason to fear proposing such a bold step. The banks are widely hated. Already, 50% of people support their nationaliation, according to a recent poll by the Legatum Institute.

And it is entirely justified. The public has already bailed the banks out, at an estimated cost of over £1tn, according to former Bank of England boss Mervyn King. The banks add to the public bill by organising massive tax avoidance for the super rich. According to a pamphlet on nationalisation of the banks by the Fire Brigades Union:

“Research for the Tax Justice Network campaign estimated that between £13tn and £20tn in financial assets has been hidden from the world’s tax authorities in offshore banks. That does not even include nonfinancial assets like art, yachts and mansions. Even a fraction of this wealth could pay off government debts, pay for investment in public services rather than cuts and could fund economic recovery.” (FBU, It’s Time to take over the banks)

The banks are helping to hoard vast sums of money which goes uninvested. Whilst the UK has one of the lowest investment rates in the world - hence our delayed trains and collapsing manufacturing - private companies sit on roughly £750bn that goes uninvested.

Whenever socialists propose big increases in spending on social services like the NHS, we are invariably asked “where’s the money coming from? There’s no magic money tree you know!”

One such necessary expenditure is of course green energy. Tens of billions need to be invested every single year in order to ‘decarbonise’ the British economy. This is entirely feasible - the technology is already here, and is being improved rapidly. And this needed expenditure is actually relatively small considering its enormous importance. It is also far smaller than the amount that was found to bail out the banks. So how do we make sure this investment takes place? 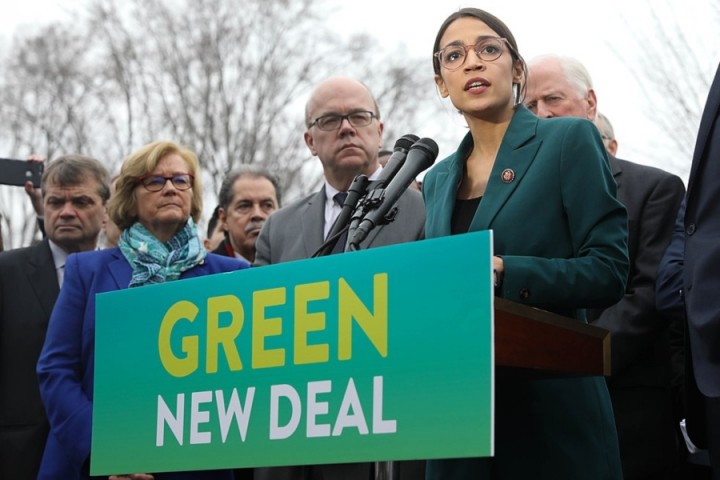 Labour Party activists have just launched Labour for a Green New Deal, inspired by Alexandra Ocasio Cortez’s plan in the US. As well as this, according to sources:

“In Parliament, Labour’s Shadow Treasury Minister Clive Lewis and Green Party MP Caroline Lucas will table a Private Members’ Bill that (if passed) would force the government to enact a Green New Deal. The ‘Decarbonisation and Economic Strategy Bill’ would place duties on ministers to introduce a radical 10-year strategy for public investment designed to decarbonise the economy and eradicate inequality.

“It would legally require ministers to empower communities and workers to transition from high-carbon to low and zero-carbon industries, introduce stricter environmental regulations and protect and restore natural habitats.” (Josiah Mortimer, leftfootforward.org)

These activists are calling for a Labour government that would fund ‘green industrialisation’ and massive investments in public transport, which they say would require “the whole economic structure of our society [to] change”. Exactly! It is obvious that these campaigns - both of which are based on the Labour Party - must be coordinated.

But all of this clearly requires massive spending and - to change the “whole economic structure of our society” - a bold socialist programme.

Unfortunately, when it comes to the question of the banks and money, the Green New Deal activists keep things very vague, saying only that “by banning the funding from banks and state subsidies that keeps these behemoths afloat, fossil fuel extraction can be ended”. Those right-wingers who ask us where the money will come from would have a field day with this!

Banning certain activity by banks will not go far enough. Banks will always find ways around regulation - after all, you can’t control what you don’t own. Moreover, the banking industry is global. The fossil fuel industry is too important to capitalism, and too profitable, for it to be affected by this. Furthermore, we need the vast resources of the banks, who’ve cheated us for years (not only by investing in fossil fuels), in order to plan the socialist economy we need. 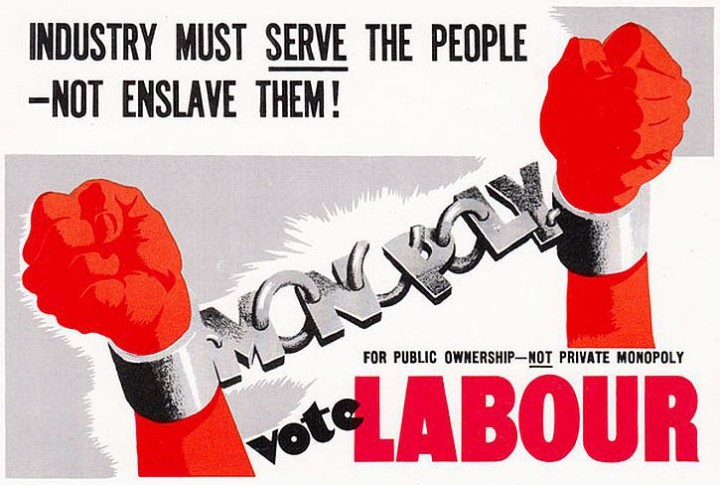 50% of the public already supports the nationalisation of the banks. And this is even before Labour have campaigned on this issue. There is no need to be modest. It is high time someone demanded the banks were put under public control.

Momentum would have a bigger impact if, instead of launching its own campaign (outside of the Labour Party) aimed at Barclays, it fought inside the party to change Labour policy on this question.

The Corbyn movement should link up with the Labour for a Green New Deal campaign, and help to give it organisational heft, with Momentum’s already existing network of local groups. Better still, they could help give it a more radical socialist programme - including demands for the nationalisation of the banks and the energy companies. With that programme, Labour would have a ready made answer to accusations that this green programme can’t be paid for.

100 years ago, Labour adopted Clause IV, which called for the public ownership of the means of production to ‘secure for the workers the full fruits of their industry’. The Labour4Clause4 campaign has been launched to fight for the reinstatement of Labour’s socialist aims.

It is necessary to push for a Green New Deal and to attack the banking and fossil fuel industries. But this also highlights the need for the public ownership of these key levers of the economy. That is why Clause IV remains relevant and should be restored.