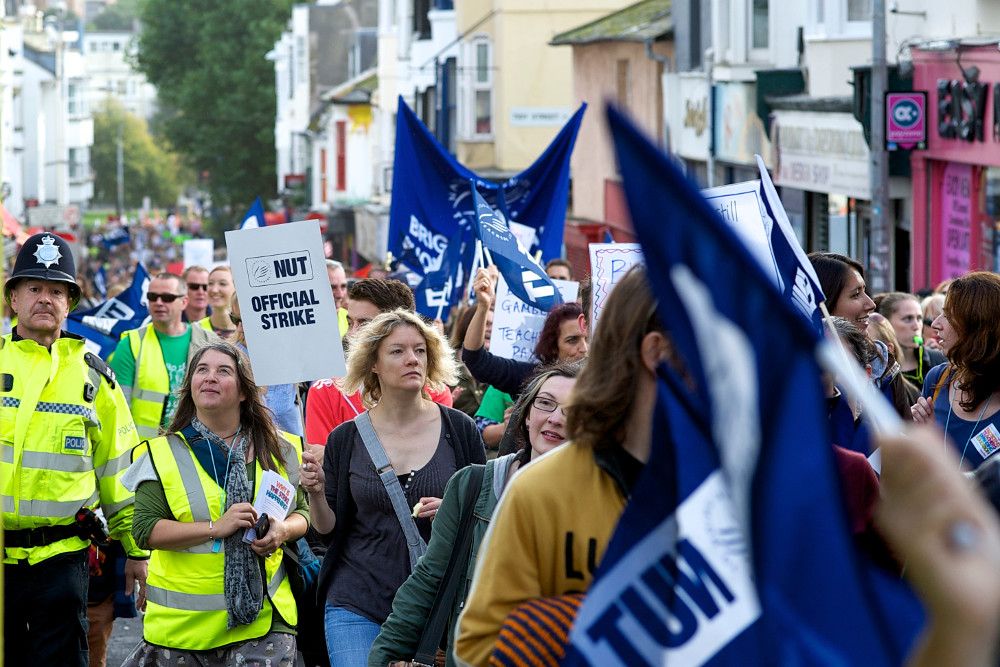 The strength of feeling among teachers can be seen in the magnificent turnout for the regional strikes that took place this month on October 1st and 17th. Teachers in the NUT and NAS/UWT, representing 90 per cent of teachers, have come out en masse, with the result that thousands of schools have been closed for the day.

What is also significant is that it has not only been secondary schools that have been closed, but large numbers of primaries where there is often only a half dozen or a dozen active union members and where it is easier for head-teachers to brow-beat their staff.

Teachers are fighting against a multiplicity of attacks on their living standards and working conditions. By holding wages down below the rate of inflation for five years and by huge increases in superannuation payments, teachers’ take-home pay will have declined in value by over 15 per cent during the life of this parliament. Moreover, the increased superannuation payments are to pay for smaller pensions payable at a later date. Teachers will now be expected to work until they are 68 or over, when in reality most teachers are burnt out by then.

New pay guidelines have abolished national pay rates and now teachers’ pay scales are entirely at the whim of local head-teachers and governors and they are linked to what is alleged to be “performance”. In fact it is impossible to ascribe children’s learning and development to any one teacher and the new performance-related pay schemes are simply a recipe for localised bullying and favouritism. Even if teachers do manage to scramble the greasy pole of their school’s pay-scale, the hard-won increments that are gained are no longer ‘portable’ as they would have been in the past. Going from one school to another means a teacher will have to start climbing the scale from the bottom, all over again. So if your “face doesn’t fit” in a school, moving to another school may not be an option, giving head-teachers an additional tool to intimidate and bully staff.

In addition to this, so-called “capability” proceedings are being used now on a massive scale to weed out union reps, “awkward” members of staff, and more experienced (and hence expensive) teachers. There is a huge disproportion in capability proceedings against women teachers and older teachers. In reality, most teachers will not work to 68 – they will be forced out and will in all likelihood end up simply unemployed – something which is a far cheaper alternative for the government than paying a living pension.

Now Michael Gove [Secretary of State for Education] is suggesting to the national pay review body that some of the additional protections that have been painfully built up over the last few years be removed. He is suggesting the removal of guaranteed time for Preparation, Planning and Assessment (PPA time) so that the crushing demands of marking and planning will be chopped into little parcels of ten minutes here and fifteen there. In reality, it will mean teachers doing more work at home. Gove is also suggesting to the national body the removal of the central specification of hours and days worked – ostensibly to create greater ‘flexibility’, but in reality to increase the length of the school day and teacher contact-time.

Also important for teachers is the list of  21 “non-teaching duties” which was established a few years ago and which lists those responsibilities that teachers are not bound to carry out. The list includes things like administration, data entry, display work and the like. Now Gove wants to remove this list so that teachers will get a whole range of non-teaching duties over and above what they already do. Last but not least, Gove wants to abolish the “rarely cover” agreement by which teachers were not obliged to cover for absent colleagues as much as they used to do. If this agreement goes it will mean, once again, that teachers’ “free” time in school – little enough as it is – will be lost in covering for colleagues who are ill.

Teachers are also angry about the creeping privatisation on the education system. There is no longer any obligation on academies or free schools to even employ qualified teachers – some jobs for new teachers have been advertised for as little as £14k – and this will undermine the education of our children and do untold damage in the long run. Last week it was announced that the newly appointed head of a Pimlico ‘free’ school in London – a 27 year-old woman without any teaching qualification – was to stand down. This is a humiliating admission that, without proper training and experience, unqualified staff simply cannot ‘hack’ it in the class room. It is interesting to note that this young and unqualified woman happened to work for the rightwing think-tank Civitas before coincidentally being picked to head one of the government’s new privatised schools. This think-tank has played an influential role in pushing Gove’s right-wing agenda of privatised ‘free’ schools with a militaristic approach to education, and it seems that, thanks to their support, their employees are nepotistically being given positions in our schooling system that they do not merit.

It is nothing short of disgraceful that Labour’s new Shadow Education spokesman, Tristram Hunt, has followed on the footsteps of his predecessor, Stephen Twigg, in supporting free schools, although he calls them by a different name. The Tories want to take all education provision away from the control and accountability of local communities and that is exactly what Twigg and now Hunt are supporting. It is shameful that nowhere in Labour’s policy is there any commitment to democratic local management of education and schools through local authorities or elected governing bodies. Labour seems to be following the Tory precedent of allowing academy chains to run schools, opening the door to profit-making schemes and ripping off the education system.

Labour is going to have to wake up to how angry teachers really are. Teachers are losing large sums just to take a one-day strike – anything up to £150 or more will come out of their next month’s pay – but in the long run they have no alternative but to fight for their profession, for their livelihoods, and for the education system as a whole. These strikes are not the end of the issue. The fight goes on, for a one-day national strike later in the term and for an on-going campaign beyond that.