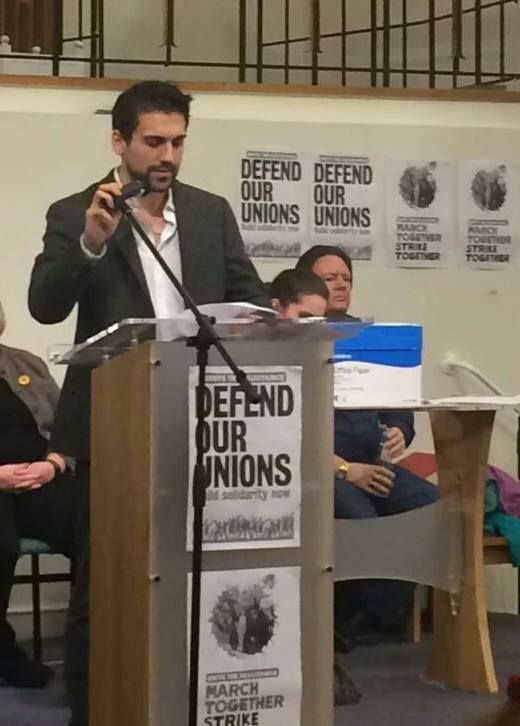 Junior doctors in Britain are preparing to strike next week for the first time in their history. We publish today a statement by Dr. Yannis Gourtsoyannis, a member of the BMA (British Medical Association) national executive junior doctors committee, calling for united working class action to defend the junior doctors and fight austerity.

The forty-five thousand balloted junior doctors returned an impressive 98% in favour of industrial action, which is set to take to place following a collapse in talks with the Tory government. The junior doctors are responding to an unprecedented attack on pay and conditions, which the Tories government is determined to carry out as part of their austerity programme.

Read the statement in full:

A CALL FROM THE BMA - TO OUR FELLOW WORKERS, TRADE UNIONISTS AND ACTIVISTS: WE NEED YOU!

Junior Doctors across England will be commencing industrial action on Tuesday 12th January. We are opposing this government’s attempt to impose an unsafe new contract on the medical profession. It is our view that the proposed contract represents an existential danger to the NHS as an institution.

You may be aware that the BMA had initially suspended its planned industrial action at the start of December and returned to talks with the Department of Health. That decision was made in good faith. However, over the last few weeks, in the course of negotiations with the government, we have encountered only intransigence. It is clear that the government perceives our contract issue as pivotal for its attempt to “reform” the NHS towards a neoliberal, commercialised system.

It is therefore evident to us that we have no choice but to transform our 98% ballot mandate into action.

The developments of the next few months will have consequences stretching far into the future. This government is wilfully putting at risk our patients' safety, the tolerability of our working lives as NHS workers, and the very viability of the NHS as a publicly-funded, publicly-provided service.

Why we need YOU

The coming period will be the ultimate test of the BMA’s resolve as a union. However, we remain mindful of the fact that the BMA is not an abstract entity operating in isolation from wider political developments. There is no way that we can win this on our own. We need all concerned citizens, activists and trade unionists to stand alongside us in this fight.

Over the last few months we have been in dialogue with many trade unionists throughout the country and we have been enormously grateful for their support both at a local and national level. The public messages of support from our allied health worker colleagues, the firefighters, the teaching unions and the TUC and TUCG unions have galvanised junior doctors.

We are therefore well aware that all eyes are upon us and that the institutions which represent the wider working class stand with us in solidarity.

We are in no doubt that Osborne, Cameron and Hunt will use the proposed doctor’s contract as a tool for achieving the destruction of safe terms and conditions throughout the NHS and throughout the public sector. The Conservative Party is attempting to stretch the NHS into an ostensibly 7-day elective service whilst simultaneously launching the biggest assault on NHS resources in its history. The politics of austerity represents a clear and present danger to the nation’s health.

A victory for the Junior Doctors would signify the first real crack in the entire edifice of austerity in the UK.

Please stand with us. And when you need us, ask us. We will stand by you.

On behalf of the entire BMA we thank you all for your incredible support so far. Many of you will have seen the details with regards to the planned action and I will reiterate them below. We invite you to come out and display your visible support for us on the days of action.

Finally, I would also like to take this opportunity to remind you of another important upcoming date. On Saturday 9th January student nurses, midwives and allied health workers will be marching in opposition to government plans to scrap the NHS student bursary. The protest will assemble outside St Thomas’s hospital at midday and proceed to Downing St. The BMA will be marching alongside the nursing students and we hope to see you there!

Just as the social democratic consensus in this country began with the inception of the NHS in 1948, so too will the NHS be the site of Britain’s last stand against the all-consuming forces of austerity.

Solidarity is the antidote to the cynicism of those in power. Now is the time to stand together in a common defence of the NHS. If not now, when?