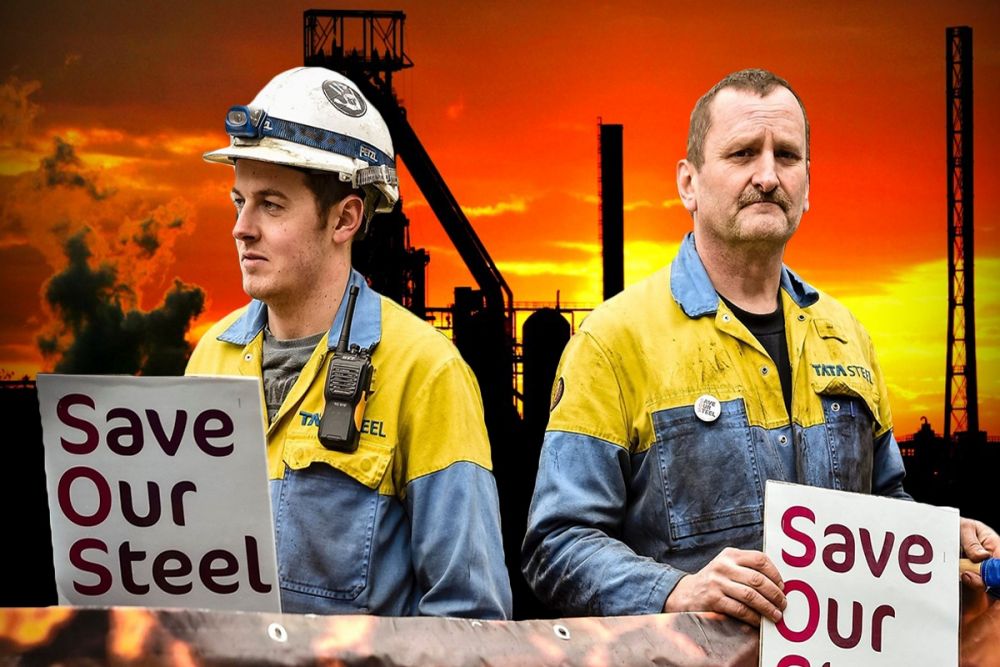 Constrained by the straightjacket of their own dogmatic subservience to the invisible hand of the free market, Cameron and the Tories have shown themselves to be impotent in halting the decline and downward trajectory of British capitalism.

The fate of Britain’s steel industry – along with the lives of those working class communities reliant on it – hangs in the balance as Tory ministers continue to flail in response to the news that Tata Steel is exiting the UK. Bosses at Tata Steel are said to have set a deadline of the end of May for the sale of their UK business, which currently provides around 15,000 jobs across the country. But with Tata themselves estimating losses of £1million per day from running their steel plants, it is looking increasingly uncertain as to whether a private buyer will be found to step in and save the industry.

British steel workers and their families will therefore wait with bated breath over the coming weeks as their future is decided behind closed doors in negotiations between an out-of-touch Tory government and a variety of parasitic capitalists who are circling like vultures, preparing to swoop in and feed off the wounded and vulnerable steel-producing communities.

Sajid Javid, the Tory business secretary and devoted acolyte of Thatcher, responding to demands by Jeremy Corbyn and others to save the British steel industry, has ruled out nationalisation as an option. Indeed, as one commentator noted, the free-market ideologue “has seemed incapable of even uttering the words ‘industrial strategy’”. With a CV consisting almost entirely of roles in finance and banking, Javid epitomises the real, ugly face of the Tories.

Given the option, therefore, the Tories would have been quite happy to see the furnace fires go out at Port Talbot, Scunthorpe, and elsewhere. After all, to use the words of Iain Duncan Smith in his recent resignation letter, “it doesn’t matter because they don’t vote for us”. But, faced with a series of scandals and crises – from the aforementioned resignation of IDS and the splits over Europe, to the Prime Minister’s implication in the Panama Papers’ revelations and the strikes by junior doctors – the Tories cannot afford to have yet more blood on their hands.

The anger towards the government surrounding this issue goes far beyond just those in the steel communities directly affected, with over 150,000 signing a parliamentary petition initiated by Jeremy Corbyn calling for action to rescue the steel sector. And with the EU referendum fast approaching, how the Tories handle the current steel crisis will have implications beyond just the future of Britain’s industry.

“Could the Government’s handling of the steel crisis cost David Cameron his job?” the Independent newspaper (6th April 2016) asks. “The question is being asked by politicians in Wales, who feel a backlash against the established parties and the EU as they campaign for next month’s Welsh Assembly elections.”

“If Wales voted to leave the EU in the June referendum, that could tip the scales in favour of Brexit and Cameron would be calling the removal men to Downing Street much sooner than he would wish…

“‘There is real anger on the doorstep,’ said one Labour source in Wales. ‘A lot of it is directed at the EU, as well as the Tories for their woeful response to Tata’s announcement’.”

Javid, Cameron, et al. must therefore be seen to be doing something to “save our steel”. But, caught between the rock of the global steel crisis and the hard place of their own scandals and internal wranglings, the Tories have been unable to offer any assurances or solace to the 40,000 or so workers employed by Tata and their connected suppliers.

Socialism for the rich

Taking advantage of the Tories’ desperation, potential buyers are, in the words of the Economist (9th April 2016), demanding “plenty of government sweeteners” as part of any deal. The primary suitor for the Port Talbot site at the present time is Sanjeev Gupta, the owner of the Liberty House Group, a multinational steel and metals corporation. But the list of “sweeteners” suggested by Gupta is enough to make you wince. As the Financial Times (6th April 2016) highlights,

“Before rushing ahead, the government needs to think carefully. Mr Gupta’s involvement comes ata price. He wants the government to shoulder many of the plant’s liabilities ahead of a purchase, including its environmental andpension liabilities. He has also signalled the need for further assistance, which may involve help with Port Talbot’s future capital and operating costs. All this may require temporary nationalisation and the injection of very substantial sums.

“Fairness as well as finance dictates that the state cannot be the sole guarantor of Port Talbot’s viability. While there is a case for alleviating legacy costs, these are not cheap. The environmental clean-up could cost £1bn alone, and closing the current pension fund deficit at least a further £485m.

“The worst outcome would be for the state not to rescue Port Talbot, but simply to allow Mr Gupta to gobble up the juicier parts of Tata’s UK operations without competition. That would just reward the owners, while simultaneously hurting the taxpayers and pension scheme members whose interests the state is supposed to protect.”

In short, any government involvement will be similar to that seen in the 2008-09 financial crisis, when taxpayers were left to foot the bill for the crimes of the spivs and speculators – that is, nationalisation of the losses and privatisation of the profits; socialism for the rich and blood-sucking capitalism for the rest.

Trade union leaders have called for Tata to be a “responsible” seller, and for the government to ensure that they find a “responsible” buyer. But capitalists such as Gupta are not interested in being “responsible” to anyone but their shareholders. Already, the Tories have allowed for the hyenas to come in and gnaw at the carcass of Britain’s steel industry, with Greybull Capital – a London-based investment firm – purchasing Tata’s long products division in Scunthorpe for the nominal price of £1.

Given the parlous state of the steel industry – both in Britain and internationally, with the enormous excess capacity of steel on a world scale – it is clear that no private business will step in to fill the empty shoes left by Tata’s departure. Instead, a plethora of deals similar to that of the Greybull acquisition will likely be seen, as Britain’s steel plants are sold off piecemeal to asset strippers.

Gupta has claimed that he can turnaround the Port Talbot works by replacing the existing blast furnace with an electric-arc furnace. Even with such measures, job losses would still be seen, since the electric-arc furnaces are less labour-intensive. Meanwhile, to add insult to injury, the Liberty House owner still demands that the unions accept lower wages and that the government writes him a blank cheque, with no guarantee provided on his part that he won’t just up and leave in the future.

Rather than subsidising the profits of parasites such as Gupta, the government should be taking the whole steel industry into public ownership. As mentioned above, by Tata’s own estimates, they are losing £1million per day – i.e. around £365 million per year – on their UK steel business. In comparison, Labour MP Meg Hillier, the chair of the Public Accounts Committee, has stated that the UK loses around £16 billion per year because of tax evasion. In other words, if the Tories stopped helping their tax-dodging friends – including the Prime Minister himself – they could fund the British steel industry for at least the next 40 years.

Nationalise steel! For a socialist plan of production!

The Labour and trade union leaders, meanwhile, have fallen short of calling for genuine nationalisation, instead restricting themselves to demands for government assistance and temporary nationalisation to “stabilise the industry” and prepare the ground for a private buyer – in other words, to do exactly as Gupta is insisting on and prop up the profits of the bosses.

Whilst the Blairites and big union leaders are more than happy to spend £40bn+ on Trident – nominally to protect jobs, but in reality because of their craven obeisance to the Establishment – it seems that they are unwilling to spend a fraction of this to save many more jobs in a sector that is actually socially useful.

Instead of asking the government to take on all the risks whilst handing the capitalists all the benefits, Corbyn and the other leaders of the labour movement should be making the argument for nationalisation and democratic workers’ control and management of Britain’s steel industry. Such a call would find an immediate echo amongst the labour movement and the wider public, with opinion polls finding that around 62-66% of people (including even a majority of Conservative voters) support the nationalisation of the Port Talbot steelworks.

If such measures were taken and extended to the other major levers of the economy – such as the banks, infrastructure, construction and other major monopolies – then Britain’s steel production could be integrated into a general socialist plan of production to meet the needs of society, whilst also investing in training and technology to provide workers with new skills and lower the hours of the working week.

The madness of capitalism

Steel production figures have always been a bellwether for the strength and health of any advanced industrial economy. In 1875, at British capitalism’s peak, the UK accounted for 40% of world steel production. Today that same figure is less than 1% – a reflection of the generalised relative decline that British capitalism has undergone over the past century. Britain has been reduced from playing the role of world hegemon in the 19th Century to being a second- or even third-rate imperialist power today, forced to kowtow down before the rising dragon of capitalist China and its leaders.

China, meanwhile, due to decades of capitalist development and, more recently, years of Keynesian investment, has built up a formidable industrial sector. But within the confines of the nation state and production for profit, the result has been to generate an enormous excess capacity – i.e. overproduction – in not only steel, but a whole variety of industrial commodities and capital goods.

As the Economist (9th April 2016) notes, “The country [China] has produced more steel in two years than Britain since 1900, according to the International Steel Statistics Bureau, and is indeed awash with excess capacity.” The result, according to OECD estimates, is a global glut of 600 million tonnes, equating to an excess capacity of nearly 40% in terms of total world annual steel production.

Nevertheless, with the Chinese economy slowing down, the Beijing government is set to “restructure” their steel and coal industries, resulting in nearly two million job losses amongst workers in these sectors. Those at Port Talbot, therefore, are not the only workers suffering at the hands of the anarchy of the market.

With a new world slump on the horizon, such tensions in the global economy are only set to increase. Britain’s position within this maelstrom is already precarious, with the IMF recently cutting their forecasts for UK economic growth as a result of the uncertainty surrounding the EU referendum, and the current account deficit – a measure of the country’s strength (or, rather, weakness) in relation to the rest of the world in terms of exports and foreign investment – reaching a record high.

There has never been a more pressing need for a socialist alternative to this madness of capitalism.