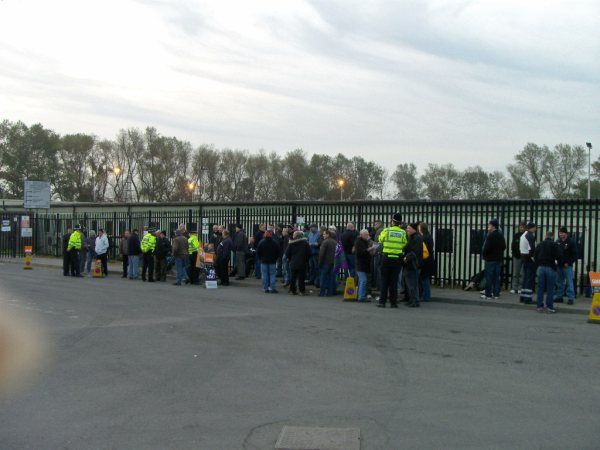 Striking refuse workers in Leeds have voted to return to work after nearly three months on the picket line. The all-out industrial action, which ran from September 7th to November 25th, was in response to savage pay-cuts that would have slashed individual wages by thousands of pounds per year. Workers attending a mass meeting at the suitably flamboyant Jongleurs Comedy Club voted by nearly four to one to return to work, endorsing a deal which benefitted many workers but raised concerns for some.

Eleven weeks is a very long time to be out on strike – for many refuse workers this was their first experience of a dispute like this. Without the tremendous solidarity shown, many would have faced potentially crippling pay-cuts. Now the majority won’t lose a penny, and some will even gain financially, albeit in return for longer hours and increased weekend working. The threat of privatisation also appears to have been lifted, for now.

The council had repeatedly refused to negotiate and spent a small fortune on a scabbing operation. In the face of this, the majority of workers stuck together, with only a minority returning to work during the strike. This solidarity has forced a huge climb-down from Councillor Brett and Leeds City Council, providing inspiration for workers across the public sector who know they will soon be facing similar battles…

Warning for the future

To begin with, the workers who operate public rubbish tips actually got no money at all, only a promise of a ‘review’ in December. This means they currently stand to lose nearly £1300 each per year. Admittedly the majority of workers in this section didn’t come out on strike, but it was a bitter pill to swallow for those who did. And the refuse collectors, who struck solidly for the whole eleven weeks, were given a ‘contractual productivity bonus’, which entails annual reviews of performance against a set of targets.

This presents a danger to workers as they return to work – with the service fully operational again, management may begin to feel in a position of strength. This potentially means an unfavourable pay review in December, and a ratcheting-up of performance targets next year. Although people are back at work, this battle is far from over – if management refuses to act in the spirit of the agreement, workers must be prepared to go back out on strike. The last few weeks have show what power the refuse workers have.

Lessons from the dispute

During the first couple of weeks of the strike, a number of workers set up secondary pickets at public tips; members of the public turned away, and many workers refused to cross these picket lines. Socialist Appeal supporters took part in one such action, which succeeded in closing the tip. However, after a threat of legal action from the Council, the union instructed its members to desist from this successful tactic. In the opinion of many strikers, this was a mistake: stepping up the secondary picketing was what most workers wanted and would have seriously disrupted the Council’s scabbing operation. Instead, many workers expressed frustration at spending every day at Cross Green depot, tucked out of the way on an industrial estate.

All public sector workers know that these attacks will only become more frequent. Public sector unions must be ready to face these threats together, through all-out coordinated action. Had the rest of the council workers come out in solidarity with the refuse workers, this dispute could have been over within a week.

If, as expected, the Tories win the next election, public-sector workers will face drastic cuts. The Leeds refuse workers have shown that the Tory agenda of cuts and privatisations can be defeated.