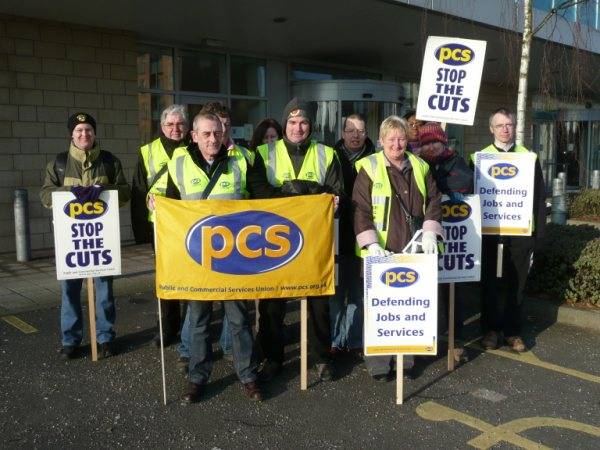 This article was written just before the official announcement of the PCS strike ballot result on February 25, which confirmed massive support for action on 8-9th March. We are publishing it together with links to a series of short reports and interviews from the picket lines these past two days. Up to a quarter of a million jobs, possibly more, could be destroyed if government plans are allowed to go ahead. That explains the militant mood that has developed.

[Note: Originally published as PCS Strike Ballot: The phoney war is over]

The phoney war is over. While the past year has seen defensive struggles breaking out in particular areas - Waterford Crystal, the Visteon factories in Enfield, Basildon and Belfast, the bin men of Leeds – the capitalists and their representatives in the political parties have been preparing a general attack on the working class. By walking out of talks with the Public and Commercial Services Union (PCS), having made a derisory offer, the government has committed itself to the next assault and one of the opening labour struggles of the next period. At the time of writing PCS is balloting 270,000 workers in the civil service on strike action against government plans to rip up the CSCS – the Civil Service Compensation Scheme.

For those unfamiliar with the CSCS it's an agreement drawn up as an act of parliament to recompense civil servants who are laid off. So, in the midst of the current crisis of capitalism, having forked out mutli-billion pound rescue schemes for multi-billion pound banks, profits soaring again and workers being told to carry the can for all of this, the government is now trying to roll the agreement back - in short, the cheaper it is to lay people off the more people will then lose their jobs.

As it stands someone aged 41, earns £24,000p.a. (a good wage in the civil service, usually at line manager grade - more representative would be the £16-18,000 paid at the AO/Administrative Officer grade) with 20 years’ service would receive £50,000 as a redundancy payment instead of the current £72,000 under the government’s initial plans. PCS defends the scheme as a fair and decent one for members but it must be remembered that this New Labour want to cut the redundancy payments of a Thatcherite scheme by up to a third! (CSCS was passed by parliament in 1972, then heavily revised by the Thatcher government in 1987).

The mere threat of strike action in the run up to a general election has since forced the government to up this to a £60,000 redundancy payment. The government has made much noise about fat-cat payoffs and the ‘generosity’ of the scheme. The reality is that it is the rank and file civil servant – office clerks, Jobcentre Plus staffers - who will be hit hardest by this. Approximately half of the entire civil service work force earns £18,000 a year or less. The entry level grade, AA – frequently junior office clerks, mail sorters and data input positions – pays £12,800 in the first year rising to £13,400 in the second; a comparable position in the private sector pays around £15,000 a year. The fact is these aren’t the cushy numbers they are made out to be. These jobs, however, are the cornerstone of many towns and cities across the UK. In Sunderland public sector jobs make up 30% of all jobs, Hastings 42%, Belfast 40%, Swansea 38%, Dundee 37%, Cambridge 43%, Plymouth 35%, Newcastle 32%, Glasgow, Leicester, Middlesbrough 31% and Liverpool 36%. (centreforcities.org, pdf).

Many analysts have projected job losses across the public sector (education, health, social services as well as civil service) amounting to a quarter of a million – perhaps even 350,000 starting in 2011 and continuing to 2016. These cuts are born of the same reasons for the attacks on education as well as other areas – now the government plans to make faultless people pay a second time for the greed of the capitalists. The working class cannot absorb an attack on this scale. The North-east alone was only just beginning to recover from the Thatcher assault when the recession hit. Now? Now we fight not just our jobs but our cities, our communities our comrade workers. We strike in the defence of Newcastle, Sunderland, Manchester, Liverpool, Glasgow, Belfast, Cardiff. The capitalists are attacking us in order to maintain their profits, their bonuses. Ireland has shown the way! Not one job! Not one penny! Make the bankers pay!

For reports from the picket lines see articles published on Socialist Appeal: