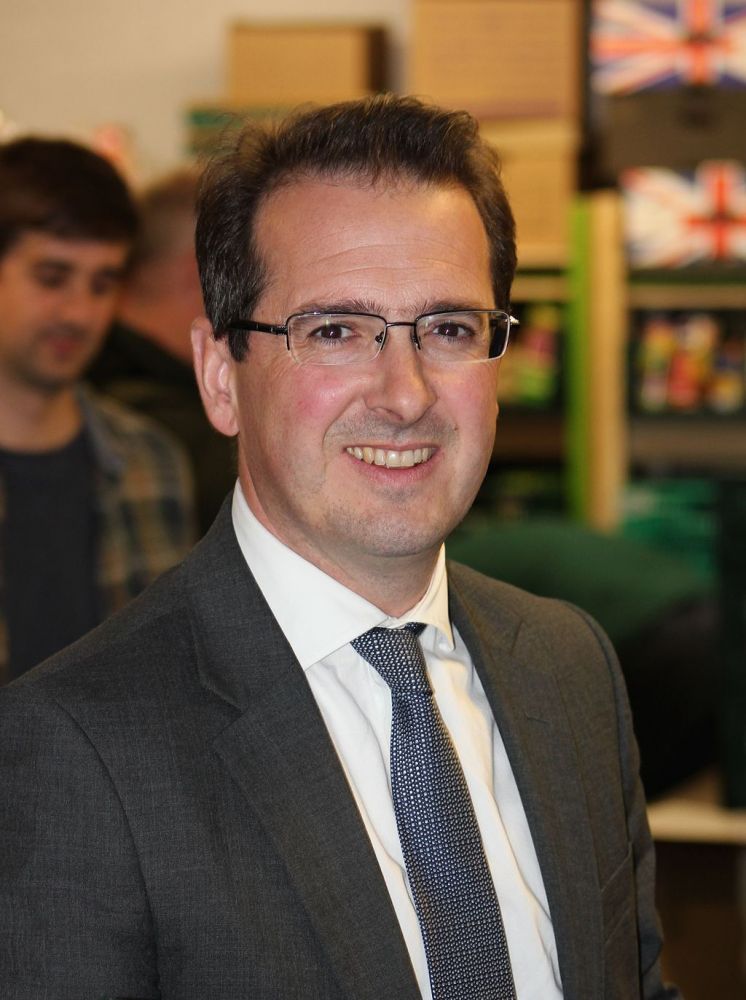 [This article was first published on socialist.net on July 22.] After a short lived leadership campaign, beset with false starts and misfortune from the beginning, Angela Eagle graciously fell on her sword in order to allow another “unity candidate”, Owen Smith, MP for Pontypridd, to challenge Jeremy Corbyn for the Labour leadership.

Angela’s act of heroic self-sacrifice was met with an outpouring of praise from colleagues. Her decision to stand down was described as “selfless, principled and courageous” by Hilary Benn, who has himself been selflessly and courageously hiding behind stalking horses like Eagle and Smith ever since he set the wheels of the so-called “chicken coup” in motion several weeks ago. Smith himself described Eagle as “a star” - the kind of commendation a primary school teacher would use use for a pupil who managed to sit still for half an hour - and proceeded to set out his “radical” vision for the party.

In an appeal to the party membership Smith has said, “I can be your champion. I am just as radical as Jeremy Corbyn.” Further, in an interview with Channel 4 News he announced, "I am on the left of the Labour Party, I share many of Jeremy's values but I think I can talk about modernising those values.”

Like Corbyn, Smith assures us that he stands for peace. For example, unlike Angela Eagle, he did not vote in favour of the Iraq War...because, conveniently, he wasn’t an MP at the time. However, he asserted his “radical” views on the war when, standing as a Labour candidate in a 2006 by-election, he said, “We are making significant inroads in improving what is happening in Iraq”, comparing the invasion of Iraq to the British socialists who fought in the Spanish Civil War. Despite this, in the same interview, he said he didn’t know if he would have voted for the war - a much more ‘modern’ approach to the question than Corbyn’s consistent opposition.

Also like Corbyn, Smith was a member of the Campaign for Nuclear Disarmament - until he ‘modernised’ his opposition to nuclear weapons by voting in favour of renewing Britain’s £200 billion nuclear deterrent on Monday (July 18). He is also apparently a regular at arms industry events, making the case for world peace, no doubt.

And again like Corbyn, Smith stresses that he too is against austerity and inequality. He wants to rewrite Clause IV of the Labour Party constitution to include a commitment to “fight inequality” (strong stuff) and has pledged £200 billion to be invested in a “British New Deal” (this is hopefully in addition to the £200 billion to be spent on Trident renewal).

However, unlike Corbyn’s old-fashioned opposition to austerity, Smith offers a much more modern version. In his own words, "It's not enough just to be anti-austerity, you have got to be pro-something and I am pro-prosperity”. Finally, a Labour politician who is in favour of greater wealth! The Tories must be terrified.

What exactly this means in practice is unclear, but Smith gave some indication on the BBC’s Newsnight when he declared, “The truth is, we must still support overall reductions in welfare spending because I think that is right.” Anti-austerity and pro-prosperity - but not for the ‘scroungers’.

Smith has development his fiery brand of pro-prosperity politics over a career rich in valuable “life experience”. Growing up in South Wales, Smith credits the Miners’ Strike of 1984-5 as his “political awakening”. During the 1990s, Smith was busy getting life experience as a BBC producer while out-of-touch Corbyn was trapped in the Westminster bubble. Smith took his first political job as a special advisor to the then Labour government, where he must have seen a great deal of prosperity.

All that prosperity must have made an impression on him, because after three years he switched to a job with the multinational pharmaceutical company, Pfizer, for £80,000 a year. Smith has reacted angrily to claims he was a lobbyist, clarifying that in fact he “never held a lobby pass”. He was in fact Pfizer’s Head of Policy, and “used to occasionally talk to the Department of Health”. Readers can make of that what they will.

This wealth of experience must have had a formative effect on his radical pro-prosperity approach to the NHS. Perhaps it was this that led him to emphasise the benefits of “choice” (read: privatisation) when it comes to healthcare in a Pfizer press release, or praise New Labour’s disastrous PFI schemes - a policy he subsequently has admitted “opened the door to the current government to step through into a real attempt at marketisation and privatisation of the NHS.”

Unlike Corbyn, described by two-time election loser Lord Kinnock as “weird” and “unelectable”, Smith, as he was quick to boast to the BBC, is “normal”. He even has a wife and kids and everything, making him instantly more relatable to Corbyn, who presumably reproduces by photosynthesis on his allotment, like some kind of weirdo.

Smith really connects with people, earning the affectionate nicknames “oily Smith” and “viagra man” during his campaign to be elected MP for Blaenau Gwent in 2006. Despite his almost universal popularity, Smith, the Labour candidate, failed to win in this usually staunchly Labour constituency, which he claims gave him first-hand experience of how Labour was “losing touch”. Corbyn, on the other hand, has no notion of this, having won eight elections in a row since 1983 as MP for Islington North (not to mention the four by-elections and four mayoral elections that Labour have won in the past year under Corbyn’s leadership).

Smith had to wait until 2010 to be elected to a different seat, that of Pontypridd, where he secured a reduced Labour majority and an impressive swing to the Lib Dems of13%. On the basis of this proud electoral record, Smith plans to reconnect with voters outside of Corbyn’s effete, Islington elite. Indeed, voters in Labour’s northern heartlands should love Smith’s proposal to hold a second referendum on EU membership.

Vote for Corbyn! Fight for socialism! 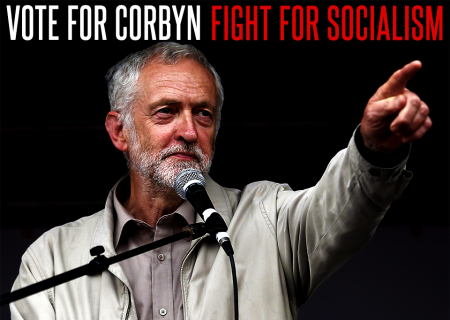 Photo: Socialist Appeal (UK)In reality, behind the smoke and mirrors of Smith’s glossy PR, he is the archetypal Progress candidate. Even the BBC remarked, “His campaign launch - tieless, immaculate white shirt, flanked by his family and a youthful band of supporters - could have come straight from the Cameron/Blair playbook.”

More worrying still is the rogue’s gallery of right-wing MPs who have endorse this “radical” left-winger for the leadership: Yvette Cooper, Tristram Hunt, Harriet Harman, Chuka Umunna… the list goes on in a comprehensive who’s who of hardline Blairites. For all of Smith’s claims that he himself is not a Blairite, he is most definitely the Blairites’ choice. As the old saying goes, judge a man not by the words he speaks but the company he keeps.

It has to be asked, if Smith represents the same kind of programme as Corbyn, then why is it that MPs who have explicitly renounced Corbyn’s programme feel so comfortable supporting Smith the “radical” for the leadership? Perhaps they are confident that if Smith were to win, all his anti-austerity promises would quickly take a backseat, with his (and their) “pro-prosperity”, pro-business policies firmly in the driving seat.

Ultimately, this is not a contest between two lefts over competence or electability - it is a battle for the heart and soul of the Labour Party. Defeat for Corbyn will inevitably open the way for a sharp shift to the right, back to the Tory-lite policies of the Miliband years and beyond, accompanied by a ferocious attack on party democracy in order to ease this transition.

This is about so much more than Jeremy Corbyn as an individual, as he himself has acknowledged. The opportunity exists for Labour to become a movement of hundreds of thousands, fighting to transform society. Smith represents a clique of MPs and party bureaucrats who would strangle this movement at birth. We must defend it with all our strength.

To do that we must first vote for Corbyn in the upcoming leadership election, as many will do. An astonishing and unprecedented figure of over 183,000 people registered to vote in the space of just 48 hours this week, despite the £25 fee barrier. This, along with the latest polling figures showing strong - and increased - support for Corbyn amongst Labour members, not to mention the massive #KeepCorbyn meetings and rallies that have taken place across the country, demonstrate the enormous (and growing) backing that Corbyn has.

But as well as voting for Corbyn, we must prepare ourselves politically and organisationally for the huge battles ahead. If and when the Blairites lose this leadership election, they will not cease their intrigues or go quietly into the night, and may well move to split the party. It is time for the revitalised Labour membership to defend itself against such manoeuvres by choosing its parliamentary candidates in mandatory reselection contests.

Finally, we must be alive to the fact that the vicious right-wing opposition within the party is just the thin end of the wedge. The Tories, the media, the commanding layers of the armed forces - in short, the entire British Establishment - is irreconcilably opposed to Corbyn and what he represents. In the face of this opposition, half-measures and compromise will not suffice. Nothing short of a revolutionary socialist programme can defeat austerity and the capitalist system which breeds it. Vote for Corbyn, fight for socialism!