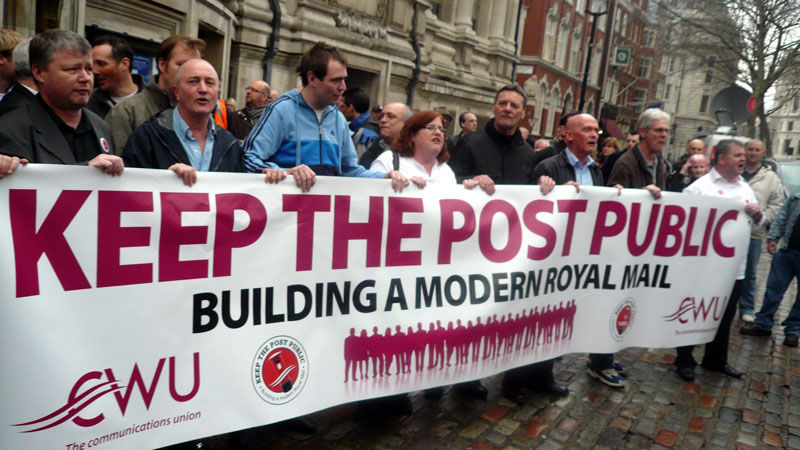 Postal workers across the UK have voted 3-1 in favour of national industrial action over Royal Mail's failure to reach a national agreement covering the protection of jobs, pay, terms and conditions and the cessation of managerial executive action.

Almost immediately following the result came the inevitable wave of distorted propaganda from Royal Mail, the government and the press. Royal Mail continue to claim they are not breaking the Pay and Modernisation agreement that ended the last national strikes in 2007 - claiming instead that the CWU agreed to the so called 'modernisation' that is now being implemented via executive action. This 'modernisation' is simply code for speed up and job cuts and not any genuine negotiated agreement on, for example, the use of new technology like walk sequencing machines (automated sorting machines). Numerous local offices have found themselves victims of Royal Mail's executive action where changes to working patterns have been implemented without the agreement of the union. In my own office, five jobs have now been lost since the changes were introduced with many others on fixed term contracts wondering if they’ll be next. Part-time workers have been brought in on equally unsecure contracts, meaning they are unlikely to join the industrial action. The Pay and Modernisation agreement, in its introduction, states that 'both Royal Mail and CWU are jointly committed to working together to deliver change by agreement'. It is clear therefore that Royal Mail is patently lying to the public on what has brought about this dispute and the disruption to services.

The reality is that Royal Mail are aiming to break the union and are being encouraged to do so by a government fuming that they were not able to part-privatise the company earlier this year. Arguably their logic is that a casualised workforce with either an unrecognised or emasculated union would make the company a more attractive proposition for any potential future buyers. The government has also been engineering Royal Mail's failure for a number of years to open the way for privatisation. In 2001 the government set up ‘Postcomm’, the postal regulator, and ended Royal Mail's 345-year monopoly on the collection and delivery of mail. Licenses were offered to private companies, like TNT and UKMail, to collect and sort bulk business mail. This mail is then passed through Royal Mail's system for delivery men and women to deliver 'the final mile'. Royal Mail workers do the work and the likes of TNT take the profits! Royal Mail was and is still being prohibited from competing with these companies on a level playing field because, according to Postcomm, it has an 'unfair competitive advantage'. In 2006 it fined Royal Mail £1 million because it did not have ‘adequate measures within its wholesale and retail divisions to prevent it obtaining an unfair advantage over its competitors’. Meaning, quite simply, that Royal Mail has the superior infrastructure and resources to sort and deliver this mail cheaper than the private companies - and this is, apparently, a problem. You could not make it up! A large percentage of this business mail is what formerly subsidised ordinary stamped mail and the universal service which guarantees a daily delivery from Land's End to John O'Groats for every member of the public. Having opened up the most profitable parts of the business to competition and rigged the rules so that Royal Mail are unable to even compete on a level playing field, the government and Royal Mail management then have the nerve to say that the company is uneconomical and private finance is required to remedy the situation!

For the government’s part, ‘Lord’ Peter Mandelson, Secretary of State for Business, Innovation and Skills (among the other whole government departments he appears to have swallowed up!), continues to emphasis falling mail volumes as the reason why Royal Mail has to modernize and why private finance will ultimately be needed. What Mandelson fails to mention is that in the last seven years, according to Royal Mail’s own submissions to the Hooper Report, there has been a 30% decline in staff levels from 229,000 workers to 162,310. Meanwhile mail volume has fallen 7% and the methods used to calculate these figures by Royal Mail have not been validated for a number of years. No wonder most postal workers have noted that they are carrying more and more mail than ever and are incredulous when told ‘mail volumes are down’. This is further evidence that modernisation is not the issue at hand as opposed to Royal Mail aiming for more job cuts and more speed up, without consultation with the CWU.

Meanwhile press reporting on the dispute has been equally misleading combined with outright scaremongering. Wednesday's edition of The Guardian claimed that online retailer Amazon had cancelled its contract with Royal Mail over the result of the ballot. In fact, Amazon had only released a statement that suggested it is considering contingency plans if a national strike was to take place and was not planning to cancel any contracts with Royal Mail in either the short or long term. This article, unchanged despite Amazon’s statement, remains on its website nearly a week later. On Thursday this was followed up with an article entitled ‘Argos and eBay ready to desert Royal Mail as union votes for strike’ with a sub-heading that claimed ‘75% of 250 firms may opt for rival delivery service’. On reading the article however it is clear that this is just more scaremongering. The survey question apparently given to these 250 firms is not revealed. The Guardian, a so called ‘liberal’ paper, so far appears to be acting as a mouthpiece of both Royal Mail management and, of course, Peter Mandelson.

This being the case it is therefore vital that the CWU take every opportunity to get its message across to the public about what the strike action is really about and who is to blame for it. It needs to be emphasised that Royal Mail has been engineered to fail and that the public’s interest in this dispute are aligned with that of the postal workers. Royal Mail and the government simply do not care about ordinary members of the public and the unprofitable mail that Royal Mail are currently forced to deliver to them because of the universal service obligation. In the midst of recession a long strike could have a significant effect on business and could begin to be seen by business and the government as endangering economic recovery. With the public onside this would lead to increasingly severe pressure on the government to step in and act.