On Thursday 11th April, a packed Socialist Appeal meeting at University College London saw miners’ leaders and trade unionists recall the brutality of Thatcher and the bitter lessons etched into their consciousness. 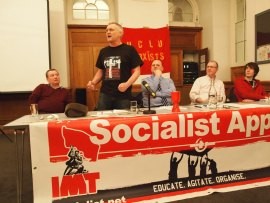 The meeting was kicked off by Chris Herriot, a former miner sacked during the great miners' strike, like so many others, on completely trumped-up charges. In response to a question from the audience as to whether hatred is ever a useful or positive thing to express, he recounted the spiteful violence and intimidation meted out from police hands to him and his family in this time, which encapsulated Thatcher’s quasi-Bonapartism. Confusion at the role of hatred comes from those naive to the brutal and inescapable realities of class society.

Chris also explained the reason for the persistence of hatred towards Thatcher, as shown in the recent spontaneous street parties, in Liverpool FC chants, and in the inexorable rise of "Ding-Dong the Witch is Dead" to number 1 in the download charts. Meanwhile, Thatcherism’s ruinous effects and policies are more present than ever today. As Chris explained, this is because Thatcher merely embodied, in a particularly spiteful and dehumanised way, the disgusting degeneration of capitalism witnessed in Britain. Indeed, as Chris pointed out, Thatcher is a good representative of the way capitalism dehumanises the ruling class, for which reason she merits no sympathy. 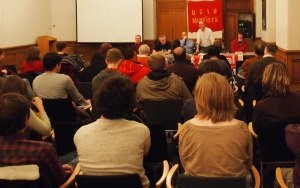 The unending austerity programme throughout Europe shows that her policies were motivated by necessary class interest and not some quirk of character or ideology. Thus this hatred can rapidly turn into something very positive - working class militancy. Chris pointed out that, in organising a state funeral, the establishment may well be shooting itself in the foot, as it could invite powerful counter-protests. This was echoed in the recent report that Buckingham Palace is concerned that, by giving her all the pomp of a military ceremony, they risk discrediting the military and whole establishment through association with such a ‘divisive’ figure.

After Chris, another former NUM militant and representative of Justice for Mineworkers, John Dunn, took the platform. He gave an hilarious speech in which he very well expressed the qualities of miners for which Thatcher and her class only had contempt. But he also described the dire situation towns such as Chesterfield and Rotherham have been living through since the late eighties right up until today. John summed up the correct socialist response to Thatcher’s death by saying that the best way to celebrate and get revenge is by consigning her class, with all their greed and inhumanity, to the dustbin of histor; that is, by fighting against the cuts and ending capitalism with socialism.

Then Rob Sewell, editor of Socialist Appeal and National Organiser of the Militant at the time of the Miners’ Strike, gave a speech explaining the history and background to Thatcherism. He outlined the nature of the crisis ridden Labour government, which came to an end with the Winter of Discontent. However, he explained that their doom was spelled out not by unreasonable union militancy, but the unviability of reformism when capitalism enters crisis.

Rob spoke also of the other bitter struggles of Thatcher’s reign, including the steel strike of 1980, after which 500,000 steelworkers were sacked under Ian MacGregor’s watch, before he took the reigns to smash the miners. The mass unemployment, the privatisations, the deregulation of the City, the selling off of council housing and the Wapping strike, were all explained as proof of the general strategy of smashing the working class in the interests of British capitalism.

We are still paying the price for those defeats today. Many from the audience spoke of the destruction of their communities, the crude commercialisation and privatisation of everything in Britain, and the obvious consequence of all this in the present crisis.

It was very truthfully remarked that, if only the working class had leaders as resolute and clear headed in the defence of their class as the ruling class had in Thatcher, then and today, we would instead speak of people like Thatcher and the interests they represent as defeated relics.

Source: Over 50 turnout to hear from those who fought against Thatcher