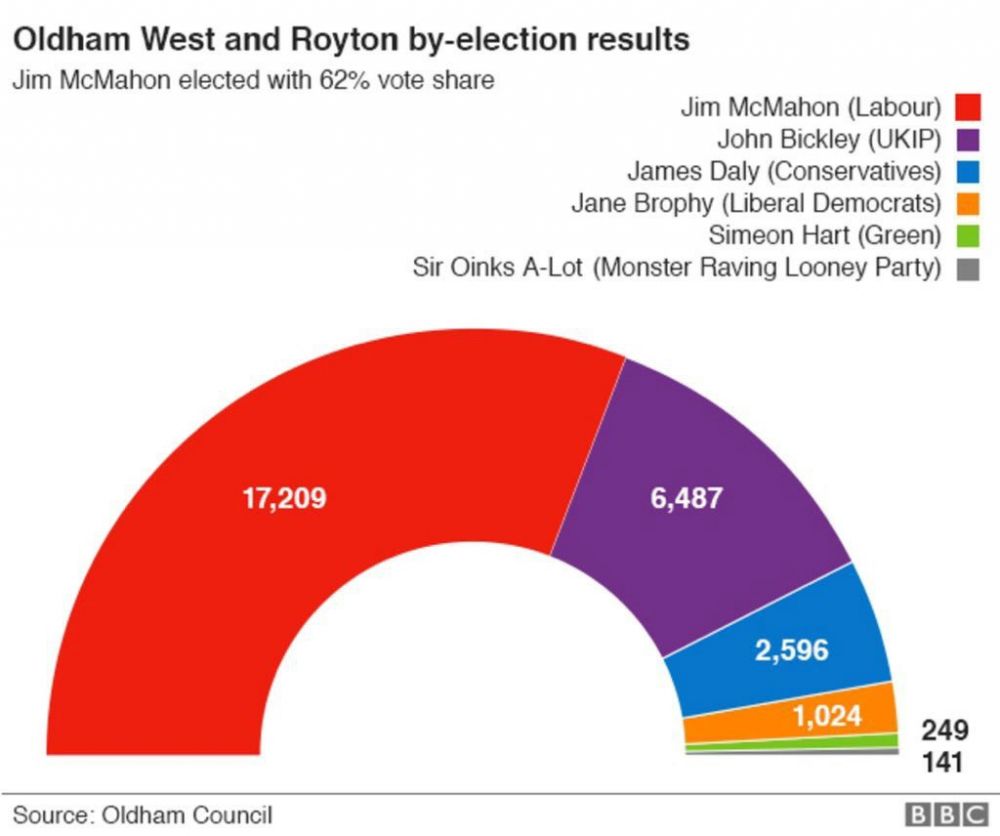 Everyone was on the edge of their seats, braced for terrible news. The grim realities of life ‘up North’ were about to come crashing down onto Corbyn’s hippy head, sending his naive dreams scattering into a puddle along with his crown of flowers. 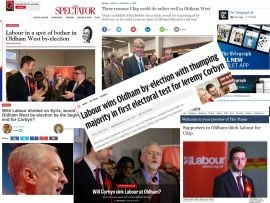 UKIP’s Patrick O’Flynn smugly tweeted “next week is the week when Lab finds out how many middle class student ultra leftists there are in Oldham” [about 17,000, apparently]. The geniuses at City Am - a reliable mouthpiece for the capitalist class - wrote an article with the ominous headline “With Labour divided on Syria, would losing the Oldham West by-election be the beginning of the end for Corbyn?” In this article, we read that the “result is on a knife edge”.

A knife edge? Labour won the seat with 62% of all votes; that is, nearly twice as much as all the votes for other parties put together. A knife edge indeed! The same article then insinuates that the Tory Zac Goldsmith is likely to beat Sadiq Khan in the London Mayoral election next May, when in fact he is trailing him by 7% in the polls.

Callum Jones, Sam Coates and Lucy Fisher in The Times confidently told us that “Supporters in Oldham ditch Labour for Ukip”. Really? Did they? Which supporters? What was this based on?

Such journalism, which was uniform across the press - from the so-called ‘left’ to openly right wing - was too dreadful to be mere accident. Two main motivations lay behind this cynical writing. One is the snobbery of the chattering classes, very clearly displayed in Isabel Hardman’s article for The Spectator: “Labour in spot of bother in Oldham West By Election”. According to this article,

“they [Labour ‘insiders’] believe that Corbyn is going down very badly with the large numbers of white working class voters in the seat, and that even though the South Asian population are largely turning to Labour, this will not create enough of a lead for the party to be able to sustain big white working class losses to Ukip.”

Almost all the articles in the mainstream press focused on the apparent prejudices of the ‘white working class’, which clearly was an unfounded ‘narrative’ that in reality reflected only the crude snobbery and prejudice of the middle-class authors, who assume everyone ‘up North’ that is white is living in the 1970s.

The same prejudice can be seen in Patrick O’Flynn’s tweet quoted above, and in Guardian columnist Rafael Behr (the name tells you everything) article titled “In Oldham, Jeremy Corbyn is just another face of ‘poncified’ Labour”. The method of this article is very telling: the entire argument is based around a few anecdotal interviews with UKIP supporters and one or two others the journalist has ‘found’ on the street. No reference to any polling whatsoever. Just a London upper-class liberal venturing up north to find what he wanted to find at the beginning: reactionary northerners to confirm his class’ rejection of Corbyn as simply ‘unelectable’.

It was hard to read all these articles, for the sound of the journalists collectively rubbing their hands with glee made it hard to concentrate. Dan Hodges, who tries very hard to situate himself at the epicentre of Blairite conspiring, wrote with what he must have thought was deliciously well timed irony, “of course, if Corbynites are to be believed, Labour should win Oldham with increased majority. Given all those excited new members.” In his attempts at irony, however, Hodges actually ended up making a rather good prediction.

This takes us onto the second motivation for this awful journalism: anticipating and trying to encourage the death knell for Corbyn; for the ruling class are terrified at the prospect of Corbyn successfully challenging in a general election. They must get rid of him as soon as they can.

The Telegraph excels here with its pseudoscience. Only one day before last Thursday's by-election, it ran an article with the headline: “What would it mean for Labour to lose the Oldham West and Royton by-election?”, and the subheading: “Labour leader Jeremy Corbyn faces his first test at the ballot box when voters pass judgement in Oldham West. But how bad could it be?” It was assumed in advance that the result must be bad for Corbyn. This article creates within it three ‘fantasy' [fantasy is the operative word here] scenarios in the by-election, all of which involved substantial swings away from Labour, to either UKIP and the Tories. It then extrapolated from these imagined results to an even more imagined equivalent in the general election five years away! But the entire thing was made up - exactly the opposite of what happened, which was not bad at all for Corbyn and Labour.

It is clear that this media campaign is part of a very concerted wider, virulent and relentless anti-Corbyn campaign. Now that the vote has proven all the mainstream media so willfully ignorant, we are being treated to the even more sickening cacophony of right-wing Labour MPs, many in the shadow cabinet, complaining about the ‘bullying’ of being lobbied by newly engaged voters. Ludicrously, one has even complained that Corbyn is now responsible for "making MPs who voted for the bombing targets of Jihadis", and concludes that Momentum must now be wound up - precisely because it is having some success at involving grassroots members.

It is also clear that these MPs, including ones in the shadow cabinet, were behind much of this campaign. Many of the articles refer to ‘Labour insiders’ who were fearing the worst. If that is true, it shows how much contempt many of them have in the working class. The Times article quoted earlier referred to actual shadow cabinet members giving them information about how badly Labour would do. Clearly, these Labour MPs and shadow ministers want nothing more than for the party to fail so they can stab Corbyn in the back as soon as possible.

We are also being told that this result in Oldham was really all down to the popularity of Labour’s candidate, who is on the right of the party. Conveniently, it turns out that the by-election only counted as a referendum on Corbyn if Labour lost! Jim McMahon may well be popular in the area. But local voters could hardly have failed to be aware of Corbyn and his ‘embarrassing’ ways - not only have the media been relentlessly telling us all about them, but UKIP explicitly made their campaign material all about Corbyn and what a daft hippy he is. And a by-election is one election in which UKIP, as a protest party, should have done better than in a general election, and Labour worse. But it was Labour that did better! Either those Oldhamers like daft hippies, or they are not as ignorant and brainwashed by the media as the media would like to think.

These days the only place one can turn to for a dose of reality (apart from socialist.net) seems to be biting satirical websites like the Evening Harold, that summed up the situation very well: "Labour leader Jeremy Corbyn is now so isolated politically that he can only call upon the support of a shadowy group of people known in the UK as “voters”, it emerged today."

The media and entire political establishment are being shown up for fools, partly because they are, but mostly because we live in revolutionary times. The working class is moving. It is sick to the back teeth of the establishment in all its guises. It sees in Corbyn the possibility of an alternative and of real representation. We must fight to carry through this alternative to the madness of capitalism: socialism. The Corbyn movement is the beginning of this fight.