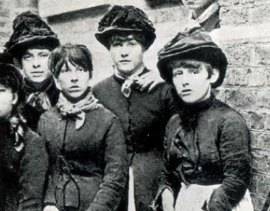 In July 1888, 1,400 female workers walked out on strike at the Bryant and May factory in East London. 125 years later, that struggle still holds a place of honour in the history of the labour movement.

The famous Matchgirls Strike, which involved over three thousand workers in one way or another, would begin a process that saw a rise in industrial militancy and the move towards ‘new unionism’ where large numbers of workers would be organised into general unions ready to stand up to the old reactionary leadership of the existing craft unions. Frederick Engels would call it the “light jostle needed for the entire avalanche to move.”

The first thing to note about the Matchgirls strike is that they were, in the main, just girls – some as young as twelve. For the working class of the 19th century, childhood was short-lived with child labour being commonplace in the great cities of the post-industrial revolution. Conditions in the factories were particularly poor – something that Engels noted on his arrival in England and which inspired him to write “The Condition of the Working Class” to draw attention to this.

At the Bryant and May matchmaking factory in Bow, conditions were especially bad for the workers. All were low-paid, working very long hours with few if any of the rights we take for granted today. Workers could be sacked or fined at the will of the management. In addition, the phosphorus fumes created in the factory and trapped by the lack of ventilation were lethal. It directly caused a form of cancer –“phossy jaw” – which could be seen in the yellow skin and facial deformations which marked those who worked there.

No wonder there was a strong sense of solidarity amongst the mainly Irish workforce. When the bosses talk of “deregulation” to “free-up industry” these are the sort of conditions they would wish us to return to.

There is clear evidence that a mood of resistance inside the factory had been building up for sometime. The main boss, Theodore Bryant, had deducted a shilling from each worker’s wage to pay for a statue of William Gladstone.

Some of the workers went down to the unveiling in 1882 to pelt the statue with stones. Some even cut their skin and spilt blood onto the monument stating that they had already paid for it with their blood. Some strike action had taken place at the factory in 1881 and 1886 but these had produced few results.

In 1888, an article (“White Slavery in London”) was published, written by the radical journalist Annie Besant, which exposed the terrible conditions within the factory. It was noted that the firm had just declared a huge rise in profits yet pay remained pathetic, even by East End levels. When the boss sacked three workers he believed had been Besant’s informers, the matchgirls decided to take action.

The decision was made to strike and out they went. For three weeks they stayed out. A strike HQ was established and support sought and got from the London Trades Council. With no strike pay or benefits, the workers had to organise door-to-door collections and other fund-raising exercises to keep going. They marched to Fleet Street to gain support from Annie Besant and later visited Parliament to speak to MPs and then linked arms to march back along the Embankment.

Although Annie Besant along with fellow Fabian Socialist Herbert Burrows played an important role in promoting the struggle and establishing the union afterwards, recent research has suggested that their role in leading the strike has been rather over-stated in union histories.

Historian Louise Raw, in her book “Striking a Light” (Continuum 2011 edition), has noted that Besant showed no interest in ‘revolutionary socialism or early syndicalism’ (p225) and considered ‘unionisation to be counter-productive’ (p226) so far as advancing the matchgirls’ claim for a better deal. Indeed she was initially opposed to the strike as a way forward. Louise Raw and others confirm that the real leadership came from the girls themselves, inside the factory. The brutal conditions bred militancy within rather than it being imported in from outside.

Initially, the bosses made all the usual threats about moving the factory and so on to break the strike. However, after three weeks of no production the owners caved in – the strike was won. The three thousand workers returned to work in triumph.

However, the job did not stop there. On July 27th, the first meeting of the Union of Women Match Makers was held and premises were soon obtained using money left over from the strike fund. This union would soon grow and be renamed to take in both male and female workers.

Law’s history of the strike also notes something else of importance. Most Victorian histories suggest that this strike was just some sort of isolated one-off.

However, there is clear evidence that their victory would act as an inspiration to many other disputes that would follow in the next few years. Law provides evidence of a sharp rise in strikes in 1889, a number of which would involve women. Most notable of these would be the Great Dock Strike of 1889. Many of those involved in that strike were directly connected in one way or another to those who took part in the Matchgirls strike. In 1892, Engels would write about the East End saying “…it has shaken off its torpid despair, it has returned to life, and has become the home of what is called the ‘New Unionism’ that is to say, of the organisation of the great mass of “unskilled” workers.” The rise of new unions with new leaders would take the battle to a new level with the successful fight for an eight-hour working day.

Today the Bryant and May factory in Bow is no more. The building still stands but it was converted into luxury flats some years ago. However, as a shining example of how militancy can pay, the fight of the Matchgirls and their part in the rise of the union movement in London and beyond, remains of great importance to all activists today and a symbol of what can be achieved.

Source: The Matchgirls strike: from a spark to a blaze