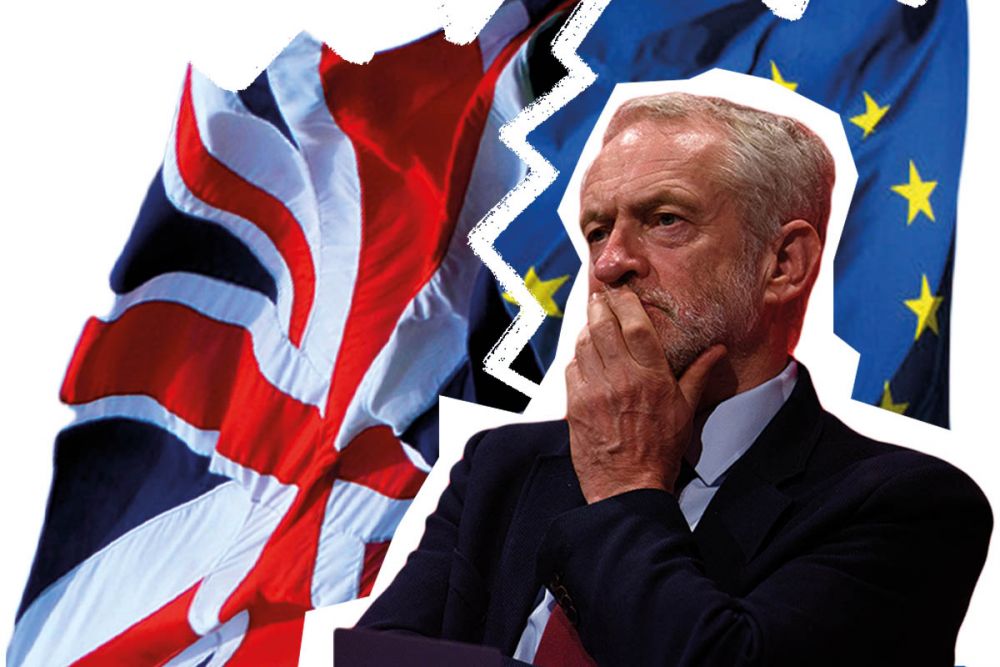 Despite Labour riding high in the polls, Corbyn’s critics are desperate to appease big business and the banks by remaining in the European Union and maintaining the status quo. As a result of vocal outrage from the right-wing of the party, Labour have made a U-turn on the question of Brexit. Corbyn and the Left should be fighting for a socialist alternative.

As a result of the general election and the campaign leading up to it, we have seen a turnaround in support for the Labour Party and a second wind for the Corbyn movement. Conversely, the Tories, which aimed to increase their electoral majority to “strengthen their hand” during the Brexit negotiations, have been totally undermined. May hoped a positive result would paper over the divide in her party regarding Europe. But instead, such cracks have been further widened.

Corbyn’s Labour, however, are not immune to similar divisions. Corbyn has been criticised by right-wing Labour MPs for what they saw as an ambiguity regarding the party’s position on Brexit.

In reality, it is not the ambiguity that concerns these Labour MPs. Rather, Corbyn’s critics are desperate to appease big business and the banks by remaining in the European Union and maintaining the status quo. This is why they have been piling on the pressure with regards to issues such the Single Market and a customs union.

This vocal outrage from the right-wing of the party, joined by an eclectic chorus of British businesses and some leaders in the trade unions, has resulted in a U-turn by Corbyn on the question of Brexit. At the heart of this issue lies the so-called “Hard” and “Soft” Brexit choices facing the country, to use the terms that the mainstream media and political commentators are so fond of using. In either scenario, Britain leaves the European Union.

The “48% movement” of Remainers, with their calls for a second referendum, are all but gone; the Liberal Democrats’ election manifesto - centred around the question of Remain - failed to garner any real support.

The question, then, is not between Leave or Remain, but: what will Britain’s relationship to the EU be after the negotiations end on 29th March 2019?

In truth, the choice between “Hard” and “Soft” is a facade. Either direction will result in crisis, as long as we remain under the diktats of the bosses and bankers. There is no safe or stable option for British capitalism.

The limits of "pragmatism"

The Labour “U-turn”, as it is being dubbed, is centred around this question.

Labour’s new position, unveiled by the shadow Brexit secretary, Sir Keir Starmer, now advocates remaining within the Single Market and the customs union for an extended transitional period (or perhaps even indefinitely) after the official exit date. This would mean that Britain would still have to abide by the free-trade laws laid down from the jurisdiction of the CJEU (Court of Justice of the EU) and the trade restrictions that apply to the European Economic Area.

Starmer’s proposal is almost indistinguishable, in its key points, from that of Conservative MPs still in the pro-EU camp.

This shift was championed by right-wing Labour MPs and was enthusiastically welcomed by British business and the more short-sighted, narrow-minded trade union leaders.

The latter, stuck within the confines of “respectability” and “pragmatism”, believe this is the obvious line to adopt. They truly believe that this position is beneficial to workers: if the bosses make more money and stability is maintained, the economy will remain healthy. If the capitalists are doing well, the argument goes, then workers will benefit too, presumably from the graciousness of the bosses and “trickle-down” economics.

Furthermore, the trade union leaders, unwilling to wage a concerted fight for decent wages and conditions at home, believe that the working class will be best protected by the meagre workers’ rights upheld by the CJEU.

In or Out - austerity on the cards

All of the austerity and anti-working class policies that have been carried out over the last few decades - namely privatisation, holding back wages, and cuts in public services - will continue, inside or outside of the EU and the Single Market.

It is under the CJEU jurisdictions that workers’ rights are being attacked - both in Britain and all over the continent. And this is not to even mention the unending austerity programme that the EU (as part of the “Troika”) has presided over in Greece, Spain, Portugal, Ireland and elsewhere since the crash of 2008.

These anti-worker economic policies lie at the heart of the European project, including the Single Market, the customs union, and the CJEU.

The “free trade” of the Single Market (in reality a capitalist trade block directed against the rest of world) has certainly brought prosperity to the banks and monopolies at the top of our society. But what has it done to improve the lives of the 99% in this epoch of capitalist crisis, which has seen almost a decade of stagnation, slump, and attacks on living standards?

For Britain, these austerity policies and attacks will undoubtedly continue to be implemented within the European Economic Area (or outside of it). The fundamental problem is the capitalist system and the attacks on living standards that it demands. No to racist rhetoric!

Conversely, crashing out of the EU in a so-called “Hard” Brexit - on capitalist lines - would be equally disastrous, especially if the Labour Party was to pander to the racist rhetoric of the official Leave campaign and put a halt on the free movement of workers.

Labour should be emphasising that stagnating wages, housing shortages and failing public services are the fault of capitalism, not of struggling migrants and refugees.

Undoubtedly, with another economic slump on the horizon, the British capitalists will be forced to double-down on their efforts to wring profits from workers.

The leadership of the Leave campaign was dominated by reactionaries demanding that that we “take back control” and free the country of EU “regulations” (by which they really mean the few regulations that hinder an even more intense exploitation of workers). One can imagine, therefore, what blistering attacks upon workers - both native-born and migrant - a capitalist Hard Brexit would be used to inflict upon the working class.

Fight for a socialist alternative Corbyn’s Labour must put workers’ rights, economic nationalisation, an end to borders, and socialist policies at the heart of the agenda - and not tie these demands to the fiction of a progressive EU.

We must state clearly, however, that Corbyn’s programme - to renationalise the railways, end austerity, and so on - will come into direct conflict with the EU’s rules and regulations. In short, a socialist Labour government would find itself fighting the EU institutions, as was seen with the threats made against the left-wing Syriza government in Greece.

The grassroots of the Corbyn movement must criticise Labour’s U-turn and lay out a genuine, socialist alternative. Rather than echoing the demands of big business and the banks, as the Blairite right-wing do, the Labour Party must become a mass political movement that serves the interests of the workers and the youth.

In order to do this, Corbyn and the Left must not be afraid of breaking with the right-wing PLP and the rest of the capitalist establishment.

With the Brexit negotiations faltering and descending into farce under the Tories, the time is ripe for the Labour Party to rejuvenate itself and begin the fight for a socialist alternative to the bosses’ Brexit, whether it be Hard or Soft.