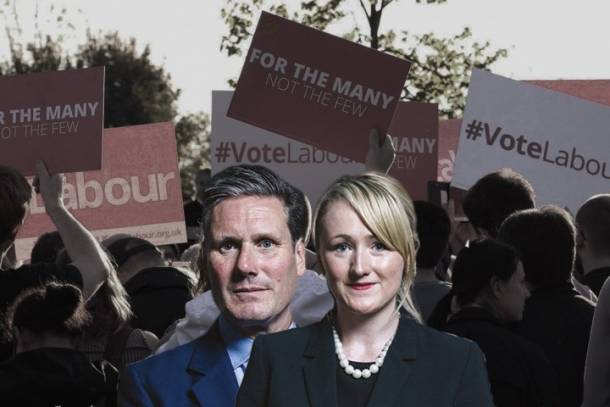 The ballot for the Labour leadership contest opens this week. Rebecca Long-Bailey and Richard Burgon are the clear candidates of the left for leader and deputy respectively. But to beat their right-wing rivals, they must mobilise grassroots members around bold socialist demands.

With nominations now closed, the race to succeed Jeremy Corbyn as Labour leader has been whittled down to three.

Left candidate Rebecca Long-Bailey has made it through with the backing of 164 CLPs and five trade unions. Lisa Nandy, the most critical of the previous leadership, has positioned herself clearly to the right, gaining 72 local party nominations in the process.

But it is Keir Starmer who has come out on top at the end of this stage, with the support of 374 CLPs and a range of affiliated organisations. How is it that this embodiment of the establishment has taken the lead over the ‘continuity Corbyn’ candidate?

Starmer’s success so far has been based on a strategy of pure opportunism. Rather than openly attacking Corbyn and his record over the past five years, the Holborn and St Pancras MP has played the part of wolf in sheep’s clothing.

As part of his leadership campaign, Starmer has offered tokenistic support for left-wing demands, such as common ownership, a Green New Deal, abolishing tuition fees, and repealing Tory anti-trade union laws. He has echoed calls for a “fundamental shift of power and wealth”. And he paid tribute to Corbyn for helping to transform the Labour Party.

The fact that Starmer has to pay lip-service to such demands is an indication of how far the party has been transformed in recent years. There has been a clear shift to the left at every level. That right-wingers such as Jess Phillips and Emily Thornberry have failed to make it onto the ballot paper shows how little appetite there is for reheated Blairism.

Starmer’s primary selling point, therefore, has been a promise to provide ‘unity’. This has been seen in every interview and hustings thus far, where the shadow Brexit secretary has repeated such platitudes ad nauseum, all whilst dodging attempts to pin him down on concrete policies and positions.

In essence, his campaign boils down to an empty assertion that he is the most electable; that he is a ‘winner’. Of course, members are just expected to swallow this statement unquestioningly. After all, who doesn’t like winning?

"Can he win back seats lost in the Midlands and the North?"

"We urge you NOT to vote for Keir #Starmer.”#LabourLeadership #CamdenAgainstStarmerhttps://t.co/Gb1kBvTR3o

But all of this is just smoke and mirrors, designed to disorientate and deceive a mass membership that is exhausted after years of establishment attacks; desperate to move on and beat the Tories in the next election.

The reality is that this knight of the realm would be a Trojan horse for the Labour right wing. This can be seen, above all, by the glowing coverage that he receives in the liberal media, not to mention the backing that he has from Blairite factions such as Progress and Labour First, as well as from no shortage of consistent Corbyn critics in the Parliamentary Labour Party (PLP).

Similarly, anyone who has been to one of the recent CLP nomination meetings around the country will no doubt have been treated to the spectacle of renowned right-wingers standing up and singing the praises of the ‘socialist’ Starmer. Ditto re. Rayner.

Indeed, despite Rebecca Long-Bailey and Angela Rayner offering their support to one another, the fact is that most local parties that have nominated Rayner have also backed Starmer. The true ‘joint ticket’ is not RLB and Rayner, but Starmer and Rayner on the right, and Long-Bailey and Burgon on the left.

Whose interests Starmer really represents would quickly be exposed if he were to win the leadership contest, however. Whilst facing pressure from grassroots activists to carry through on his vague left-wing promises, he would be under equal pressure from his backers in the City of London, who would want to see evidence that the Labour Party was once again a ‘safe pair of hands’.

With Johnson and the Tories pushing in Parliament for further cuts and attacks on the working class, there will be nowhere to hide for such slippery characters on the opposition benches. The mask, therefore, would soon slip for this respectable former-barrister.

Ultimately, the reason that Starmer has been able to get away with such hollow rhetoric, duplicity, and evasiveness is down to the softness and woolliness of the left leaders.

On the one hand, conservative layers of the labour movement have sown illusions in the shadow Brexit secretary, with right-wing, bureaucratic unions such as Unison and Usdaw giving their backing to Starmer. (The GMB went one further and nominated Nandy!) 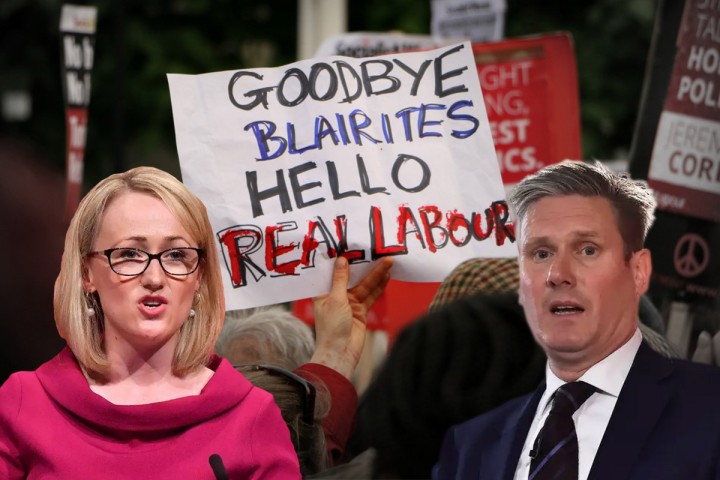 Starmer has been able to get away with his hollow rhetoric and evasiveness because of the woolliness of the left leaders / Image: Socialist Appeal

On the other hand, the left leaders have never fully and forcefully explained why the Corbyn movement came unstuck; why Labour lost the last election. In this category includes not only influential figures such as Jon Lansman, Len McCluskey, and Owen Jones, but also current Corbynista candidate Rebecca Long-Bailey – and even Jeremy Corbyn and John McDonnell themselves.

In all the post-election analysis and left-wing comment pieces, the same themes appear again and again: that this was a ‘Brexit election’; that Labour came across as divided, and Corbyn as weak; and even that Labour lost because the manifesto had ‘too many policies’.

But never are these questions traced back to the roots of the problem. It wasn’t simply that Brexit cut across class politics, for example, but that Labour was seen as part of an undemocratic establishment that was endlessly maneuvering to try and block Brexit.

Why did Corbyn appear weak? Not because of any innate personal characteristics, but because of his attempts to reconcile two mutually antagonistic wings of the Labour Party; and because of the constant attacks against him – not only from a hostile capitalist press, but from within the PLP also.

And the truth is that Labour didn’t lose because it had ‘too many policies’, but because the radicalism of these promises clashed with the reality of right-wing Labour councils carrying out cuts.

Unfortunately, Corbyn and the leaders of the labour movement went along with much of this, in a vain attempt to compromise with the Labour right wing and prevent a damaging split.

But many of the most ardent Blairites split away anyway, first as ‘Independents’, then as Liberals. And, in the end, it was precisely the compromises with these gangsters that led to the greatest damage of all: the loss of millions of working-class Labour votes.

Left-wing leadership candidates such as RLB and Burgon have made a welcome step forward in announcing their support for the ‘open selection’ of Labour MPs. But even here, the right demand is often being made for the wrong reasons.

In a recent campaign speech in Salford, for example, Long-Bailey called for open selection in order to “nurture talent”. We do indeed need to cultivate a new generation of political representatives in the PLP; and changing party rules so that being a Labour MP is not a ‘job for life’ is a good place to start in this respect. 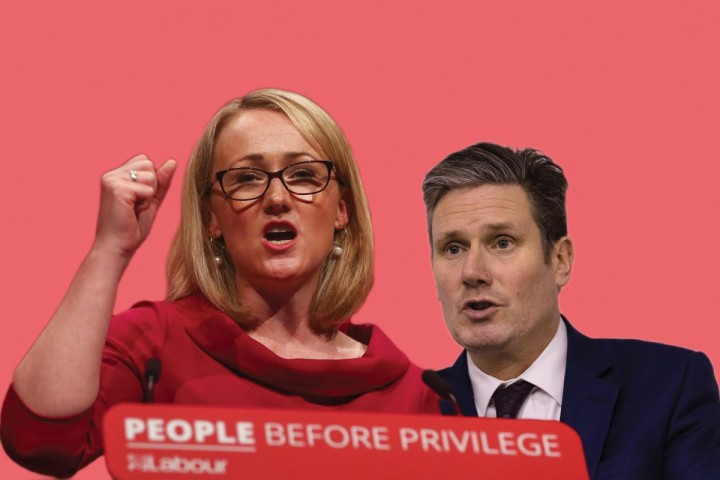 When it comes to Rebecca Long-Bailey, assurances will never be good enough for the establishment and their media mouthpieces / Image: Socialist Appeal

But the main reason we need open selection (mandatory reselection) is to provide genuine unity: not the shallow unity promised by Starmer – the unity of careerist MPs against rank-and-file members; but unity across the party, between grassroots members and MPs, in the fight for clear socialist demands.

This need for open selection to clean out the Augean stables of the PLP was underlined recently by reports that up to 50 right-wing Labour MPs could quit if RLB is elected leader. Members should remove these Blairite renegades before they have a chance to inflict further damage.

Disappointingly, Rebecca Long-Bailey has continued where Corbyn left off in attempting to appease such opponents, instead of coming out forcefully against them.

On Israel, RLB declared herself a ‘Zionist’ at a recent hustings hosted by the Jewish Labour Movement (after already signing up to the Board of Deputies scandalous ‘10 pledges’), in order to avoid accusations of antisemitism. On Ireland, she refused to welcome Sinn Féin’s electoral success during last week’s Newsnight Labour leadership debate, for fear of being brandished an ‘IRA sympathiser’. And on nuclear weapons, she has previously stated that she would ‘press the button’, in an attempt to ensure that she is not deemed ‘unpatriotic’ by the right-wing press.

But in all cases, these assurances will never be good enough for the establishment and their media mouthpieces. Only by completely bending the knee to imperialism and big business will any Labour leader be accepted by the capitalist press.

At the same time, such concessions only add confusion to the contest, blurring the lines between the left and right, thus playing into the hands of candidates such as Keir Starmer with their siren calls for ‘unity’.

No return to Blairism 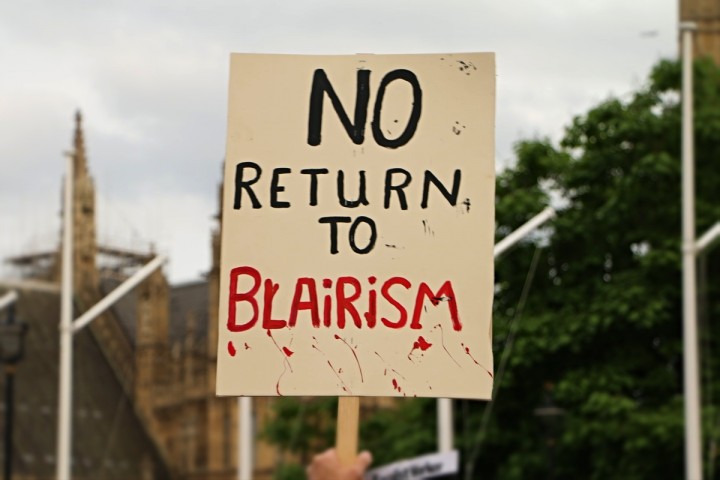 Only by going on the offensive against the Blairite saboteurs, and making the case for bold socialist policies can RLB and Burgon distinguish themselves from their right-wing rivals / Image: Socialist Appeal

There is still time to turn things around. The ballot opens this week on Friday 21 February, and closes six weeks later on 2 April. Already, activists in Momentum, Unite, and local Labour left groups are organising to phone members and garner support for RLB.

Rebecca Long-Bailey and Richard Burgon have made many excellent demands in their campaigns so far. Long-Bailey, for example, has called for a ‘democratic revolution’, involving the abolition of the House of Lords and a “People’s BBC” run by media workers and the public. “Public services, paid for by the public, should be run democratically, by workers and those who use the service,” the Salford and Eccles MP has correctly stated.

Similarly, Burgon has pledged to “hardwire a commitment to public ownership into the DNA of our party” with a new Clause IV. Elsewhere, the deputy leadership candidate has promised to give Labour members the powers to stop future military adventures.

These are the sort of radical demands that must be emphasised in order to win. Only by telling the truth about why Labour lost, going on the offensive against the Blairite saboteurs, and making the case for bold socialist policies can RLB and Burgon draw a clear line in the sand between themselves and their right-wing rivals.

It is the duty of all socialists to get involved in this fight – to prevent any return to the failed ‘centre ground’, and to help complete the Corbyn revolution.