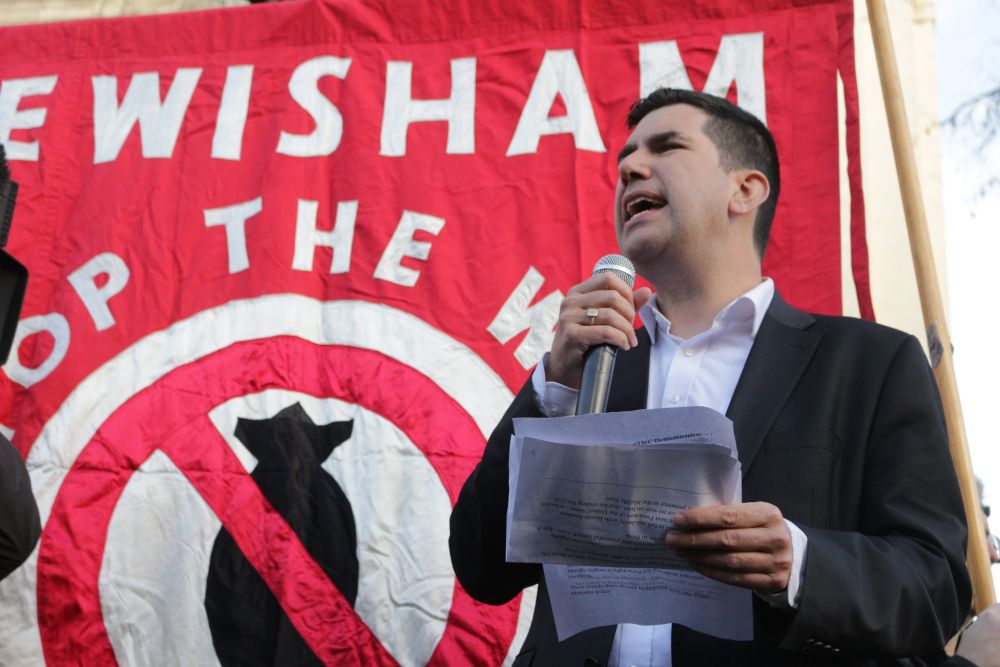 Richard Burgon, left-wing Labour MP for Leeds East, is standing to be deputy leader of the party. With the contest in full-swing, Burgon has already secured his place on the ballot, thanks to the support of dozens of CLPs, alongside the backing of unions such as Unite, the Fire Brigades Union, and the Bakers’ and Food Workers’ Union (BFAWU). We publish a recent interview with Burgon that appeared in the British Marxist newspaper, Socialist Appeal.

Socialist Appeal is supporting Richard, due to his calls for open selection and party democracy; his opposition to establishment smears and attacks; and his demand for a new Clause IV (model motion below), enshrining a commitment to public ownership back into the heart of the Labour Party.

We call on all our readers to back Richard Burgon and Rebecca Long-Bailey for deputy and leader respectively, in order to carry the torch of the Corbyn movement, and to take on the Tories with clear socialist policies.

Socialist Appeal: You’ve come out in favour of open selection. Why do you think this issue is important for the Labour Party?

I also think that if we’re talking about democratising the economy or society, people won’t believe us if we won’t even democratise our own party.

SA: Corbyn received a lot of smears and slanders from the media. Obviously any socialist leadership is bound to be attacked by the press. How would you combat that as deputy leader, and counter smears that will inevitably surface?

RB: What I would say is that we’ve got to be robust. When The Sun defamed me, I took them to the High Court and beat them at the High Court. I then used the £30,000 that I was awarded to create a local internship. So, I think we need to robustly stand up to the right-wing press.

We need to improve our rebuttal capacity. But we also need to use alternative forms of media, and analyse the bad way in which the Tories and their right-wing associates use social media to spread disinformation about us. We need to learn how we can, in a positive, truthful way, use social media more effectively. We must ensure that our socialist message and our policies to lift the living standards of working-class communities reach the communities we serve.

I think the other thing is that we need to be rooted in local communities through campaigning. That’s why as deputy leader I will work with trade unions and members to draw up a list of the 10 best policies from the last two manifestos. We will take those out into communities to repeat them again and again and again.

We need to work with local communities so that people do not associate us with the drivel written about us in the right-wing press. Instead, we need to be known for the policies that we’re speaking to them about on a local level, and also with the campaigns that we’re working with them on. That might be supporting workers on strike; supporting local people trying to run a foodbank; or, for example, supporting parents who are fighting academisation.

At the Deputy Leadership hustings I was proud to speak out against the demonisation of Jeremy Corbyn.

The billionaire press attacked Jeremy because he pursued policies that would take on the rigged economy.

Retreating from those policies is not the answer. #Richard4Deputy pic.twitter.com/JjHhJUQ3M1

SA: Recently the Board of Deputies (BoD) called on candidates to sign up to their ‘10 pledges’. You didn’t do that; would you like to explain why?

I don’t think it’s for me, as a non-Jewish person, to start signing up to which Jewish groups I will and won’t exclude. As a constituency MP, for example, it’d be untenable to say “I’m only meeting with this Kurdish community group, not this other Kurdish community group”. I’m concerned about this definition of ‘fringe groups’. We need to ensure that black Jewish people, Haredi Jewish people, LGBT Jewish people, and socialist Jewish groups are all allowed to be part of the discussion. We need to engage with all these groups in order to fight antisemitism, but also in order to take up a whole host of other issues.

I was also concerned about the idea of outsourcing our party’s complaints procedure. I would need more detail on that. Who would it be outsourced to? Who are these independent people? And how would it work in practice? I’m yet to see an example - although I’d be interested to hear of one – of an organisation which has completely outsourced its disciplinary procedure.

And thirdly and finally, I’m concerned that we don’t sign up to anything which stops us speaking up for the Palestinian people. Whether we’re speaking up against the human rights abuses by the Saudi Arabian royal family or by the Netanyahu government, we need to ensure that nothing stops an internationalist labour movement from speaking up for the oppressed everywhere around the world. So, I’m also concerned about that and need further reassurances on that.

Today we release our #TenPledges, identifying 10 key points we believe Labour needs to sign up to in order to begin healing its relationship with the Jewish community.

We would expect candidates for Labour Leader or Deputy Leader to publicly & unequivocally endorse these in full pic.twitter.com/fN66jv00c7

— Board of Deputies of British Jews (@BoardofDeputies) January 12, 2020

SA: At the most recent Labour conference, 62% of CLP delegates voted to bring back the old Clause IV. This committed the party to “secure for the workers by hand or by brain the full fruits of their industry...through the common ownership of the means of production, distribution, and exchange”. You have recently spoken about your desire to see a new Clause IV that enshrines public ownership in the party's constitution. Can you expand on that?

I think something that should also be considered when drafting a new Clause IV, fit for the 21st century, is the question of climate change. We must recognise the key role of public ownership in relation to averting climate catastrophe. Public ownership has a very important role to play in this.

For a new socialist Clause IV

As outlined above, Richard Burgon has correctly called for a new Clause IV to replace the current Blairite version, in order to “hardwire a commitment to public ownership into the DNA of our party”.

Socialist Appeal is calling on activists to pass the following motion in CLPs and trade unions, to Labour to fight for the socialist transformation of society, as envisaged by the late, great champion of the cause of socialism: Tony Benn.

Model motion: For a new socialist Clause 4 – in the words of Tony Benn

This CLP / trade union branch / conference notes the decision of the 2019 Labour conference to establish an NEC review to look into a new wording for Clause 4.

We also note that 62% of local Labour Party delegates voted to maintain the original 1918 wording, which committed the Party to common ownership.

To fulfil this obligation, we also believe we should pay tribute to the great contribution of the late Tony Benn to the Labour Party.

As a result, we believe that the Party should enshrine into its constitution a new Clause 4, using Tony Benn’s own words. This reads as follows:

“We stand for the inherent rights of all people to useful work, good homes, education, health care and dignity in retirement, free from all forms of discrimination. We believe that these rights cannot be fully realised under capitalism where human values are subordinated to the demand for profit. Our aim is to abolish the obstacles to the realisation of those aspirations.

“As a socialist party, we do not exist to manage capitalism. We aim to bring about a fundamental transformation of society, which will give to everyone a chance to live a full and satisfying life. We will adopt the means necessary for that purpose by, amongst other things, the common ownership, under democratic control and management by working people, of the commanding heights of the economy, including the banks and finance houses, the land and all the companies which dominate our economy. We stand for a democratic socialist society based upon the principle from each according to their ability to each according to their need.”

Conference believes this would be a fitting testament to Tony Benn. We therefore agree to submit a resolution to the next Labour Party conference calling for a new Clause 4 using the above wording.