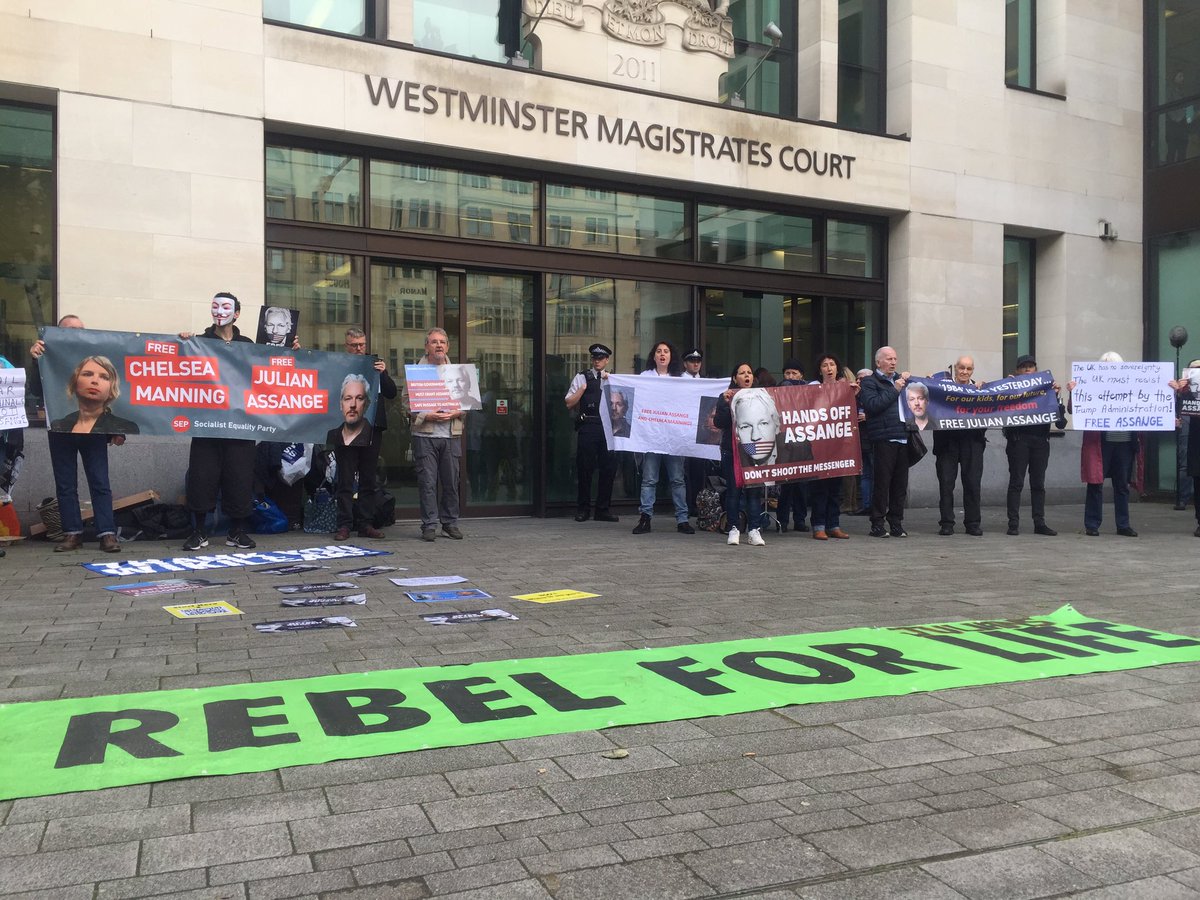 On 12 June, the UK Home Secretary Sajid Javid certified the request from the US to extradite Julian Assange for allegations of hacking and sharing classified American government documents. We wholeheartedly oppose his extradition and defend Assange’s freedom of speech.

Javid jumped the gun on Wednesday when he proudly declared that he had “signed the extradition order” (our emphasis), not the request. As the Sydney Morning Herald points out, he has “slightly misstated the procedure”, as he has only certified the request for Assange’s extradition. This must then be put before the courts in a hearing today, before the final decision on ordering his extradition returns to the Home Secretary’s desk. This was clearly a slip of the tongue, revealing that Sajid Javid seems to have already made up his mind on extraditing the WikiLeaks founder regardless of the court’s decision. In making this announcement, the minister has very publicly declared support for the US government and further demonstrated (along with May sparing no expense for Trump’s visit) that the Conservative government is subservient to US imperialism.

Sajid Javid justified signing the request on the basis that it is “legitimate”, meaning that it meets the basic criteria of being made by an appropriate authority for the purpose of prosecuting or punishing an “eligible offence”. However, in certifying the request, Javid is ignoring the human rights violation of Assange’s free speech that the extradition represents. Assange’s lawyers will rightly argue over the coming weeks or months that the extradition request is not legal. You cannot criminally prosecute someone for publishing truthful information, to do so is tantamount to censorship of the highest order.

Assange has had 18 criminal counts brought against him by the US authorities, which include accusations of conspiracy to receive, obtain and disclose information relating to national defence, as well as being accused of violating the Espionage Act. Each count carries a maximum 10-year jail sentence, so Assange is potentially facing a total of 175 years in an American prison. The editor-in-chief of WikiLeaks, Kristinn Hrafnsson, has correctly called these charges: “a blatant extraterritorial assault outside [the US] border, attacking basic principles of democracy in Europe and the rest of the world”. The US is reaching outside of its borders to incarcerate a man who has shone a light on the barbarity of their system. He published footage leaked by Chelsea Manning of the atrocities committed against civilians by the US army in the Iraq War, that revealed to the world the ugly face of the American imperialism. Now they want him to pay for exposing them and the UK state is happy to oblige and condemn Assange to potential life imprisonment.

Not only are the British authorities complying with the extradition, but the Ecuadorian government is also bending over backwards to assist in Assange’s extradition. Not only did Moreno’s government allow Assange to be dragged out of their embassy in London by a gang of British police, in violation of diplomatic immunity, international law regarding asylum rights as well as Ecuadorean law. They also now promptly handed over Assange’s personal belongings to the US prosecutors. The illegal seizure of property included manuscripts, legal papers, electronic equipment and even Assange’s medical records. The seizure was not permitted by Assange’s lawyers, nor UN officials, neither of whom were allowed to be present. Furthermore, since Assange’s arrest, his lawyers have made dozens of demands to the Ecuadorian embassy, (prior to the seizure) for the release and return of his belongings, with no response. Not only is this an invasion of Assange’s privacy it is also “a flagrant violation of the most basic norms of the institution of asylum” as Assange’s lawyer Aitor Martínez stated. He continued by explaining that “the protecting country cannot cooperate with the agent of persecution against the person to whom it was providing protection”. To put it plainly, Ecuador has done a complete 180-degree turn from granting Assange asylum in 2012 to kicking him out and giving the US prosecution all the evidence they want to mount a case for his extradition.

Why has the government completely changed their policy towards Assange?

In an interview for In Defence of Marxism, Fidel Narváez, (the former Ecuadorean consul in London) explained that the previous left-wing government of Correa had granted asylum to Assange “to protect his rights as a journalist, persecuted for publishing the truth”. He stated that Correa’s government had resisted US pressure to hand over Assange but that, with the inauguration of a new government last year under President Lenín Moreno, “there was a change in the foreign policy of Ecuador, a change in their relationship with the US”. Now the new government “is a servile government… that does not respect Ecuadorian sovereignty and that responded to US pressure [to extradite Assange]”. As we mentioned in a previous article, Moreno’s government is doing everything it can to appease the US and remove their houseguest who has proven to be a rather awkward problem.

Assange is facing a court hearing today, which was rescheduled due to him being too unwell to attend the original hearing a month ago. His defence lawyer Per Samuelson said it was “impossible to conduct a normal conversation with him”. He has “dramatically lost weight” and at the end of last month had been moved to the health ward of Belmarsh maximum security prison from where he is due to video link into the court hearing. Clearly, the years spent cooped up in the embassy and the stress of now being in high-security prison with an unclear future of potentially hundreds more years behind bars in the US has taken its toll on his physical condition and mental wellbeing.

The US authorities are desperate to get their hands on Assange. The US Department of Justice clearly stated that “Assange’s actions risked serious harm to US national security to the benefit of our adversaries”. This is false. They want to create the impression that Assange’s revelations put the US at risk in order to create hysteria amongst the public and get them to back the prosecution of a journalist. In fact, Assange’s only “crime” has been to publish information about the illegal actions and war crimes of US imperialism, thus undermining their ability to continue carrying them out.

This is the true motive of the American ruling class in its vengeful and vindictive prosecution of a journalist and the cruel treatment to which they are subjecting his source, Chelsea Manning. They want to shut him up and have him locked up where he cannot publish any more of their dirty state secrets, as well as sending a strong message to others. They are scared of the impact that WikiLeaks and other whistleblowers have on the stability of their system. Information of the atrocities and brutal acts committed by the bourgeoisie and their representatives can spark the flame of public outrage and open people’s eyes to the bankrupt nature of the system and its institutions that dominate our lives.

Assange could face many more months of gruelling legal disputes for his “crime” of attacking the monstrous US state machine. It is imperative that the labour movement, starting with the National Union of Journalists, but also all consistent democratic organisations, organise a mass campaign of protest against the extradition of Assange. We defend him against the extradition charge as a defence of free speech and freedom of information, which allows journalists and regular citizens to reveal the true face of capitalism, a barbaric and destructive global system which must be completely abolished.