Britain
Share
Tweet
The media in Britain and internationally have systematically portrayed the recent Lindsey dispute as being a struggle between “British workers and foreign workers”, when in actual fact it has nothing to do with this. The struggle was about defending wages and conditions as established in hard fought for trade union agreements. Here Rob Sewell points out some of the dirty tricks of the press.

The present struggle of construction workers in defence of their national agreement on terms and conditions has been deliberately distorted by the British media and press. One not unexpected aspect of the recent wave of wildcat strikes in the construction industry has been the way that the media has reported them.

Most experienced trade unionists will already be aware of the tendency for the TV and print media to misreport strikes – ‘holding the country to ransom’ ‘small, politically motivated group of men’ ‘greedy/selfish strikers’ and so on. The aim is always to belittle industrial action and attempt to demoralise those taking it. 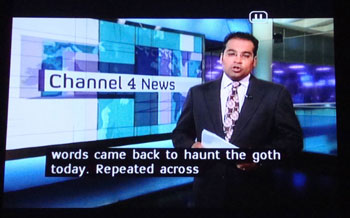 The capitalist press were keen to twist and divert the struggle of the Lindsey workers onto nationalist lines, as a struggle between British and foreign workers over “British jobs”. Photo by Gwydion Williams on Flickr.

This time, however, the media has sought to play up the nationalist angle. Reporters from some of the more dubious tabloids have been sighted at mass protests with flags etc. attempting to get workers to make anti-foreigner statements. One paper even turned up with ‘page 3’ girls!

However, it should be noted that even the more respectable BBC has not been above a little misreporting. Visit http://www.vimeo.com/3065190 for an example of selective editing to give a different impression of what the workers were saying.

In this video-clip a worker is presented on the News At Ten in a way that makes him appear that he does not want to work with Portuguese or Italian workers. In the full report that appeared on the Newsnight programme it become clear that what he is saying that he is not allowed to work with them, because they are segregated.

The victory of workers at Lindsey Oil Refinery, which secured an extra 102 jobs for British workers also resulted in the national agreement (the Blue Book) covering all foreign workers on the site. This ensured that workers were not undercut by foreign contract companies, eager to undermine trade union terms and conditions in order to boost their profits.

The capitalist press, however, were keen to twist and divert this struggle onto nationalist lines, as a struggle between British and foreign workers over “British jobs”. The above BBC distortion is achieved by a very small cut in the original video. The media in general, however, went out of their way to portray the struggle in this light at every possible opportunity, attempting to set worker against worker.

The ‘Sun’ newspaper, as well as the ‘Daily Star’, published posters and whole pages with the slogan “British jobs for British workers”, as an attempt to whip up a divisive campaign. It was blatantly obvious on the protests that this was the case. At yesterday’s protest at the Isle of Grain, a reporter asked a picket some questions and then pulled out a ‘Sun’ poster “British jobs for British workers” from his pocket. He advised the picket to hold up the poster while he took a picture. When challenged afterwards, he pleaded innocence. But it was clear he had prepared his “prop” in advance to “prove” that the demonstration was against foreign workers – which it was not.

This was deliberately done to prevent other workers drawing the real conclusions, namely the need to engage in militant struggle to defend ALL terms and conditions and prevent a “race to the bottom” for the working class.

The same was done by an Italian photographer at a demonstration of construction workers outside the UNITE headquarters. He deliberately went out of his way to get a British worker to display a Union Jack. This would be printed in Italy to “show” how nationalist the British workers are. Quite correctly the shop stewards intervened to prevent this manoeuvre aimed at encouraging disunity between British and foreign workers. As one worker said afterwards, “I have more in common with workers of Latvia, Poland and Italy than any British boss.” 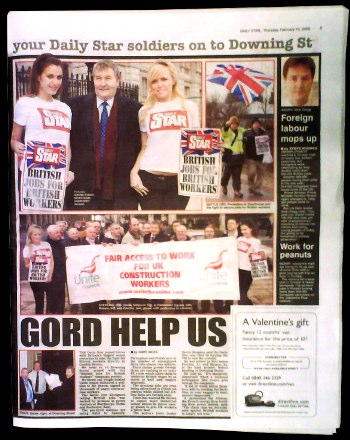 Throughout the protest at the Grain Power Station, there was not a single Union Jack or a single poster or banner demanding “British jobs”. All the banners put forward class, trade union demands.

Halfway through the morning, as photos were being taken of the pickets, a reporter from the ‘Daily Star’ turned up with a photographer and two girls clad in flimsy ‘Daily Star’ T-shirts holding their posters “British jobs for British workers”. They tried to push their way to the front of the pickets, but there were howls of protests from the trade unionists telling them to “get lost”. Sheepishly, they went around the back of the protesters and managed to get a few lads to pose with the girls. But still there were protests from the pickets, so they swiftly departed.

There were no pictures of the Isle of Grain protests in the next day’s ‘Daily Star’. They obviously didn’t get the right shot they wanted. What they did print, however, was the same two girls with their nationalist posters at the side of Derek Simpson, the joint-general secretary of the UNITE trade union, outside parliament. He apparently was a willing tool in their dirty game. He allowed himself to be used as part of this nationalist distraction, which attempted to distort the trade union’s actual campaign. By this act, Simpson was simply pandering to the lowest prejudices, hoping to gather a few votes in his re-election campaign.

Many ordinary members of UNITE will be asking themselves why Simpson would allow the union’s name to be used in this scandalous fashion. The workers at the Isle of Grain gave the ‘Daily Star’ short shrift. That is the only answer to these anti-union rags that pretend to “support” workers, while undermining their solidarity and struggle. Workers – beware of these scoundrels! Unity to defend our hard-won terms and conditions! Reject the sugar-laced poisoned “support” from the yellow press.