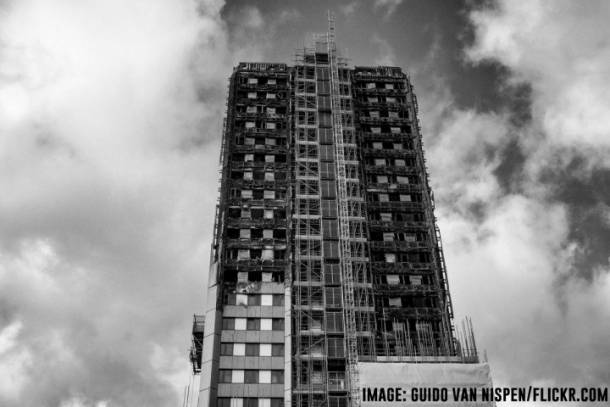 14 June 2020 marked the third year since the sickening tragedy of Grenfell tower, in which years of negligence by Tory-run governments and the Kensington and Chelsea London Borough Council led to a fire that claimed the lives of 72 people. The pain of that incident still resonates deeply through the working class. We are still no closer to justice since the last anniversary, with zero arrests of those responsible. And three years on, 23,600 homes occupied by an estimated 56,640 people are still covered in the flammable cladding responsible for the Grenfell fire.

Councils across Britain are rushing to show they think “black lives matter” by removing some statues of racists and slave-traders. But when it comes to the lives of those still living in flammable death-traps, clearly they think some lives don’t matter that much.

Many things have happened over the last year. Phase 1 of the inquiry drew to a close, concluding that Arconic's ACM cladding was the main cause of the spread of the fire. The inquiry also attempted to shift unfair blame onto the fire brigade. Phase 2 opened earlier this year, though not before being postponed by an immunity bid by those with blood on their hands.

As we pointed out last year, the main benefit of this ongoing inquiry is to have a catalogue of the crimes of the capitalists. With each sitting, we see this catalogue ever increasing. However, just as the Black Lives Matter movement has shown us that you cannot rely on the capitalist state for anything but brutality and corruption, so too will this inquiry show that the law is incapable of providing any semblance of justice.

Due to the pandemic, there has been a pause in the Grenfell tower inquiry until July at the earliest. Here is what we know about Phase 2 so far.

The focus of this phase is “the decisions which led to the installation of a highly combustible cladding system on a high-rise residential building and the wider background against which they were taken”.

Alongside this, it will also look into the major issues that came out of Phase 1. Such as, the fact that the local community warned the authorities that this disaster was in the works, and the indifference they received.

It was, as we know, the local working class who came out and organised the ongoing care and support for the bereaved and injured. The Royal Borough of Kensington and Chelsea (RBKC) were nowhere to be seen or heard. That is until they began housing survivors in inappropriate places for months. Many are still yet to be given decent homes to live in.

The inquiry will also look back on key things such as the fire doors, lifts and smoke extraction system, which we all know amongst many other things were beyond inadequate. We will see how the richest borough in the country still cuts costs for our class, yet they can as Akala said “find £18.5million to fix the pavement outside Exhibition Road”.

Phase 2 will continue into the early months of 2021, adding another notch to the years of inaction.

Phase 2 hit a ditch before it even began. Shortly before Christmas Boris Johnson chose Benita Mehra to sit alongside Sir Martin Moore-Bicke on the inquiry panel. It was then quickly unearthed that she was linked to a £71,000 Arconic Foundation donation when she was head of the Women's Engineering Society. She rightfully resigned after anger from the Grenfell community at this stitch-up. As Grenfell United put it “[the government] should never have put families in this situation”.

The next blow dug the ditch deeper when companies involved applied for immunity from prosecution. In February, at the last minute, they requested for “the use of evidence given by individual witnesses not be used against them in any future criminal proceedings”, which they were unduly granted.

The companies responsible for the fire at Grenfell are threatening to withhold evidence from the inquiry, unless they are given immunity from prosecution! 😤🤮
This is Grenfell. Don’t look away!!

The instant reaction of the survivors and bereaved was that it bore “the hallmark of sabotage”. Both Justice4Grenfell and Grenfell United were justly outraged, with the latter stating “we expect criminal prosecutions at the end of this and will not settle for anything less”.

The BBC and others tried to explain away this granting of immunity as justified. They argued that the inquiry would be able to gather more information, and that it didn't stop it being used in criminal proceedings.

However, this was proven false by May, when this protection was extended to oral evidence given by corporate entities. And that this evidence could no longer be used in any future criminal trials, thus further watering down the inquiry, as expected.

Let's not forget the fact the London Fire Brigade, who gave evidence in the first phase of the inquiry, were not granted this immunity. It's understandable that the 'stay put' policy be put under scrutiny. But the fact of the matter is that the building was already a disaster waiting to happen before the fire even began.

This successful immunity bid was the action of those that know how far the contempt for the community extended. For example, we were shown the emails of Jane Trethewey, the then housing strategy and regeneration manager at RBKC. As she was emailing back and forth about Grenfell, she showed her true colours:

“...This will have the advantage of addressing the investment needs of one of its worst property assets, and prevent it looking like a poor cousin to the brand-new facility being developed next door. There may be an option to have a cladding design that links to the design of the Academy, so that the visual appearance of the area is significantly improved.”

The goal of the council was to avoid the “worst property asset” from being an eyesore for wealthier neighbours. This was clearly more important than the safety of residents, and following regulations. An £8 million refurbishment took place to hide the “poor cousin”, rather than lift its residents out of poverty, which apologists for capitalism often claim is its main purpose.

Other emails showed us how Celotex knew about the fact that their products were flammable, yet proceeded to endanger the lives of those in the tower.

One of the first companies questioned was Studio E. What we learnt from their testimony is that they had no experience of cladding high-rise buildings. Profits were more important to Studio E than admitting the task was too sophisticated for their expertise.

Studio E also manipulated its fees to avoid the contract being put to open tender. In that case, they would have had to compete with other more experienced companies, and the council would have had to justify its decisions. This allowed them to win the contract, by personal connections with local politicians and civil servants alone.

The Studio E management for the project included Neil Crawford and Bruce Sounes. Crawford was not a fully qualified architect, and Sounes had never worked on high rise buildings, and had no experience with combustible cladding material. Sounes also admitted to not even reading the cladding fire regulations, amongst other flagrant subversions of safety regulations, or what Tories and Blairites refer to as 'red tape'.

Both the government and industry were well aware of the danger of flammable cladding. An email by Daniel Anketell Jones, of facade specialist Harley Facades revealed:

“There is no point in ‘fire stopping’, as we all know; the ACM [cladding] will be gone rather quickly in a fire!”

Exova, the fire engineer contractors, never even visited the site. They privately admitted that the refurbishments would make “a crap condition worse”. In August 2012, Cate Cooney, a senior consultant at Exova, told a colleague:

“Basically I have told him we can massage the proposal to something acceptable, with separation, lobbies etc, but that there are approval risks in the project on the ff [firefighting] shaft/MOE [Means of Escape] front.”

With a tight deadline and not enough information given to Exova, a draft document was produced with only 15 hours logged on a job that normally takes over a week’s work. It seems the profit motive operates on all these companies, compelling short cuts for what seems to be simply a box ticking exercise. A final version was never produced or requested.

We now know all of this information. Yet 23,600 homes still have flammable cladding wrapped round them. This is despite the promises of the former housing secretary, James Brokenshire, that flammable cladding will be a “thing of the past” by June 2020!

It's a national disgrace 56,000 people are still at risk from flammable cladding three years on from #Grenfell

As @ukcag say, this is 56,000 living in fear for their lives every single day

The time for platitudes and promises is over - we need action nowhttps://t.co/kYOrxIvLNI

How many years does it take to meet the basic demand that those in social housing should be able to sleep safely at night? The Tories and their big-business partners don't care how many futures they steal, so long as their profits aren’t threatened.

Grenfell was built in 1974, when Ladbroke Grove had a reputation as one of the most degraded places in London. The area has a tumultuous history, with slum housing, race riots, segregation and harsh conditions.

What's changed since the tower was erected? Grenfell survivors and families, alongside the working class stuck in similar death-traps, are listening in great pain and anger to companies and Tories who are knowingly evading prosecution. We listen as they outline the details of all their attempts to flout safety and fire regulations, to flout building safe housing, to flout their responsibility to the community, all in the name of profit.

The Black Lives Matter Protests, growing in class content, marched towards Grenfell Tower. Chants about Grenfell can be heard on every demonstration. This linking up of police brutality, systematic racism, poor housing and other issues is necessary. The labour movement, including the trade unions, should be playing a major role in these struggles. Yet, Sir Keir's reaction to the demonstrations has been pathetic.

When the Black Lives Matter movement toppled the statue of slave owner Edward Colston and threw it into the river – after years of ignored petitions – suddenly councils have sprung into action around the country. They are now rushing to remove some of the many many monuments to slave-owners and racists. They are quick to pull down statues now when there is a mass movement on their doorstep, and the cost of doing so is low. Yet they are content to drag their feet with flammable cladding, which risks the lives of thousands.

The Grenfell families and survivors cannot win this alone. We've seen the successes of the uprisings across the USA. This is just a microcosm of the power of the working class. Let us organise, fight back, and do what the inquiry and the capitalist state cannot do.