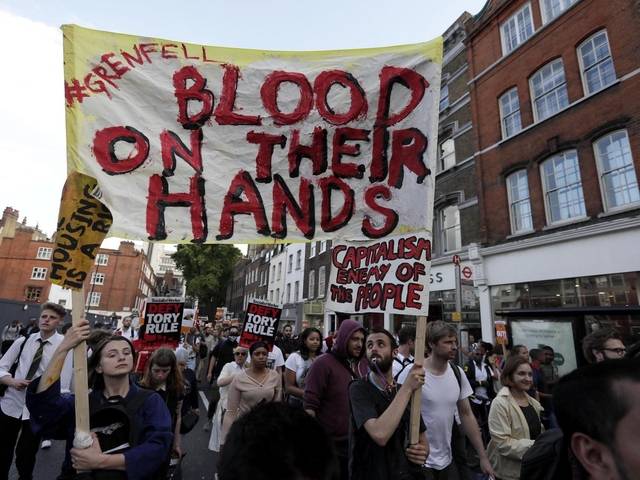 The criminal disaster of the Grenfell Tower fire has brought to the surface all the horror, injustice, and inequality of Tory Britain. All the anger and discontent within working class communities has now exploded into plain view, with a series of militant protests taking place in the last week.

We publish here reports from supportes of Socialist Appeal, the British Section of the International Marxist Tendency at these demonstrations.

Yesterday I joined a march of hundreds of local residents. The march was led by survivors of the fire and relatives of the missing and dead. We marched From Ladbroke Grove library to Bramley Road.

We marched in disciplined silence. 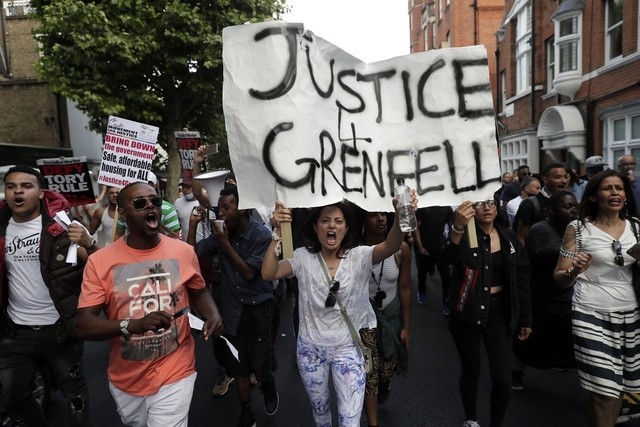 Two different marchers shouted at various points in rage at the murder which was the Grenfell fire. They were comforted and calmed by their brothers and sisters and proceeded in silence. Aside from that, the only interruption was the occasional cry of the grieving.

At the end of the march, victims’ relatives, local activists, the new Kensington Labour MP, and Michael Mansfield, a left-wing lawyer, spoke to the crowd and officially launched the Justice for Grenfell campaign.

The mood was furious; the speakers militant.

The speakers all recognised that this fire was no Act of God; no accident that could have happened anywhere, but that these residents died because they were poor, because they had no power, because their warnings where ignored.

One speaker commented on the £10 million that went on the redevelopment. He asked: where did it go? £10 million for plastic classing on the outside of the tower to make the estate more appealing to our wealthy neighbours. He explained that the Tenant Management Organisation is a privately contracted company, paid to run the council estates. The executives’ pay themselves a six-figure salary and pocket the £10 million as profit. This money was not spent on sprinklers or any fire safety measures, or on making life better for the residents inside. In fact, the inside was left with exposed gas pipes.

Fury was directed against the building firm, the local council, and the conservative government.

Following the speeches, the protesters then walked down the road and looked in shock and horror at the tower - a monument of death. Once again, a complete silence fell on the protesters. Many bowed their heads and comforted one another.

We shall never forget. There shall be no peace until there is justice.

The real mood in society after Grenfell 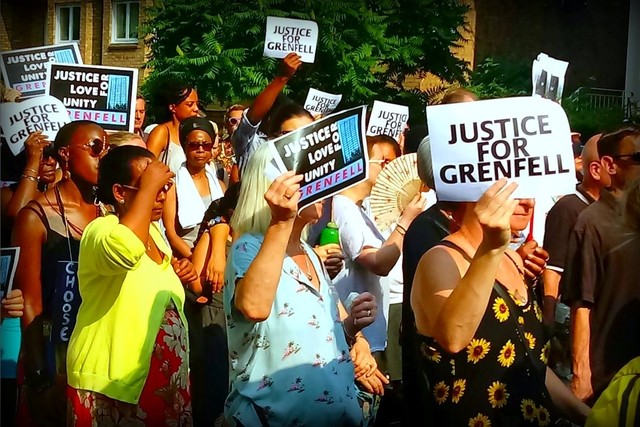 Below is a report from a Marxist student who attended the demonstration that stormed Kensington & Chelsea town hall last Friday. It gives an accurate picture of the mood of class fury that there is following the horrific Grenfell fire.

Furious members of the North Kensington community, led by the youth stormed into Kensington & Chelsea town hall this afternoon [Friday 16th June], their anger rang out through the building: “we want justice”…”Murderers!”. They justly pointed out the unacceptable response from the local council, with the lack of communication, lack of co-ordination and sheer contempt for the victims, but they also called out the failures and intentional neglect by the entire national government. The class divide could not have been more evident.

After the occupation ended, you could still feel the ferocity of the crowd outside, numbering two to three hundred. As impassioned speeches were delivered, someone yelled out in the crowd, as cameras pointed towards him he asked: “where’s the minute silence for the dead? Why didn’t any politician call for a silence?” The crowd applauded and took his words on board and our minute of silence for the victims began.

The anger could not be contained to the steps of the hall, however, and a spontaneous march towards the tower began, the chant of ‘Tories out’ boomed out straight away as it reverberated off the decadent facades of High Street Kensington and the gentrified Notting Hill Gate. The numbers began to swell, as three hundred became over a thousand, slogans with a clear class line, such as ‘luxury flats for the working class’ and ‘the rich, the rich, we gotta get rid of the rich’, were scattered between calls for justice and getting rid of Theresa May.

As protestors weaved through the affluent streets, people of many backgrounds were beeping their horns in support, leaning out the window to high five and hug people passing by, some even got out of their vehicles to join. The crowd stopped every so often and demonstrators shouted their demands for justice to the wealthy people in the bars or on their balconies as they gawked, jeered and filmed.

When we all reached the destination, the mood became more sombre in the shadow of the charred remains of the tower. As neighbours hung out their windows and off the communal stairs, speeches began again as many people, one after the other, gave terse class conscious analysis of the situation, making demands for the Tories to go, for council leaders to be arrested, for accurate information on the death toll etc. At the end of one speech, a woman began repeating: “We work the hardest in this country. It’s ours. It’s ours”.

I spoke with one of the speakers, Micky. He had family in the tower, and fortunately his six year old niece was one of those that made it out alive; however he lost others. Even carrying this burden he was resolute and he astutely put it to me that “this was a disaster the local authority couldn’t handle alone, where was the central government? They abandoned us, we would have sent in aid or troops in any other tragedy.”

The ineptitude and deceit could and should be the death throes of Theresa May’s government, let’s work together with the survivors and their community, call out for united working class action until there is justice, and make it the beginning of the end for the entirety of capitalism.

“Strong and stable? That’s a lie - you don’t care if people die.”

On a scorching summer evening in London, thousands gathered at the Home Office to protest the murder of up to 100 people in the Grenfell tower disaster. The mood of anger was palpable as people listened to speeches that were militant in their insistence that this tragedy has to be seen in the wider context of the crime of austerity, perpetrated by the ruling class against the workers’ of Britain to pay for the crisis of capitalism.

Everyone at the rally could clearly see beyond the immediate tragedy to its deeper cause - years of wider underinvestment in social housing by successive governments, and the failure of the Tory-led Borough of Kensington & Chelsea to heed the warnings of residents regarding fire safety, or to invest properly in basic safety methods. In the immediate aftermath of the fire it emerged that not only had the council failed to invest in sprinklers, but that cladding recently installed to insulate the building was made from a cheap, flammable material. It seems this cladding caused the fire to spread rapidly throughout the tower block.

A lot of the anger on the march was directed not only at the council, but at Theresa May, whose visit to the scene of the crime was marked by her failure to actually meet any of the residents or survivors, all of whom were carrying the burden of the recovery mission alone in the face of the Tory council’s conspicuous absence. “May must go!” and “No justice? No peace!” were the chants that rang out as the crowd of thousands stormed towards Downing Street, pressing up against the police line as people vented their fury.

The protest moved on to Oxford Circus, where the crowd brought traffic to a standstill in a sit-down protest. Mainly composed of young people, some of whom clearly had a personal connection to the tragedy, you could sense not only a visceral anger, but a growing political awareness. The defenders of the Tory party have, since the fire, shown faux outrage at people ‘politicising’ the fire - although any reasonable person can see that the needless deaths of dozens in social housing has political causes: these people were deliberately neglected by the richest borough in London, where saving money was prioritised over safeguarding the wellbeing of the poor.

At Oxford Circus the crowd broke into a spontaneous chant of “Oh, Jeremy Corbyn”, in praise of the Labour leader whose humane embrace of victims on the ground only cemented his position as the most popular politician in Britain. At this point a drunken individual broke into the crowd, shouting “F*ck Jeremy Corbyn!”, only to have placards thrown at him, a group of youths chasing the man away.

The class consciousness of the crowd could also be seen as the protest passed the Institute of Directors and people chanted “We’ve got to get rid of the rich”, and at the BBC, where the crowd booed the corporation - increasingly seen as yet another propaganda wing of the Tory party - and hounded it for its lies.

As we wound down towards west London, traffic stopped to let the rally go. As we passed cars, almost each and every one honked their horns in solidarity, bus and taxi drivers alike, some leaning out of their cabs to wave at the crowd and give thumbs up in support. By the time we reached Notting Hill, people were leaning out of their windows and cheering us on. You got a real sense of the anger generated by this disaster, and how it speaks directly to the injustice of the class divide in London that sees council homes go neglected, while billionaire property speculators buy real estate as investments to accumulate value whilst left empty. This divide is nowhere more evident than in Kensington and Chelsea itself.

Once we approached Grenfell, the crowd ceased chanting, and a reverential hush fell over people as we approached the vigil near the tower. Local residents applauded the march, and shouted “make your voices heard!” as we approached the tower. The scene resembled 9/11, with ‘missing’ posters plastered across walls in the vicinity, and banners hanging out of windows reading ‘Justice for Grenfell’.

At the scene of the vigil, hundreds of locals milled around, with a sense of shock and anger in the air. People were urging each other to stay calm, trying not to incite the police. Youths from the local estates could be heard remonstrating about the absence of any local politician in the relief effort. And above the scene stood Grenfell tower itself - now a ghoulish, blackened monument to the murderous neglect of Tory austerity and the urgent need to abolish capitalism, a system that prioritises the profit of the few over the lives of the many. Meanwhile, the crowd chanted, “Strong and stable? That’s a lie - you don’t care if people die”.