As the 2010 General Election looms ever closer, we have started to see the first round of political posters appearing on hoardings around the country. The Tories have kicked their campaign off with a poster of an airbrushed photo of David Cameron looking very serious next to the slogan: “We can’t go on like this. I’ll cut the deficit not the NHS.” 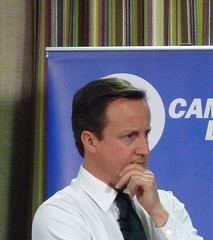 David Cameron. Photo by johnmcga. What does this actually mean? The government is running a deficit because it is spending more than it is getting in on account of the economic crisis. When the Tories say cut the deficit they really mean cut public spending – or more truthfully spending on public services. They have tried to minimise the negative impact by stating that the NHS is “safe.” But even that cannot be believed. A recent article by Tory insider Fraser Nelson, posted on the Spectator magazine website, reported that already many Tory MPs and candidates are warning that they will not go along with protecting the NHS whilst spending on the military and the police is scheduled to be cut. Open warfare is being predicted inside the Tory ranks should any Conservative Chancellor seek to implement such a plan.

Needless to say some Tories have already raised the Ireland model as the way to proceed once in power. As previously reported, this has involved the Irish government in carrying out a programme of savage cuts in public sector pay, benefits and important programmes to try and balance the books. We should be warned that many Tories see a similar assault as the only way to deal with the current £178 billion budget deficit in the UK.

Unfortunately it seems that not only the Tories but Labour also see the “need” to plan cuts in public spending. Alistair Darling told the Financial Times that halving the deficit over 4 years was “non-negotiable” (18.01.10). The only debate that is going on inside Westminster is over the question of just how bad the cuts should be. Whilst the Tory right wing is pushing for major cuts, others are arguing that care should be taken to avoid pushing the country back into recession. In other words ‘Save Our Profits’. Tory grandee Kenneth Clarke has warned (Dow Jones 22.01.10) of “calamitous consequences” should spending cuts be too severe and has called instead for a rise in VAT, a tax which hits the poor hardest. What they are talking about here is that capitalism benefits both directly and indirectly from public money and that any cuts could slow things down again. For example, the National Housing Federation have warned that cuts could reduce the number of new affordable homes being built by half over the next decade. Not good news for the building industry they say; not good news for the homeless we say!

None of these people seem interested in the social consequences of the cuts now on the horizon. For millions of the poorest and most vulnerable sections of our society, these cuts will mean a real reduction in the standard of living. We should certainly assume that even the NHS would in the end not be protected from these cuts. Public sector workers are already being warned by both Tory and Labour to expect pay freezes. We should expect such action from the Tories but it is a disgrace that Labour should also be talking along such lines. Labour was elected to defend the public sector not attack it. We should remember that this ‘deficit’ exists largely because of the huge amounts of public money that was pumped into the UK banking system in order to shore up their profits. Now the bankers want to pay out huge bonuses to themselves whilst demanding that the unemployed, those on benefits, schools, hospitals, care homes and the rest should all take a hit to “balance things out.”

This is the reality of capitalism and shows just why we need a socialist society that benefits the many not the few. Any government which tries to carry out a programme of cuts should be challenged by an organised campaign of protest and action from the labour and trade union movement, which should involve all sections of the working class in a mighty struggle to defend the welfare state and those who need it most. This is a battle that cannot be ignored.