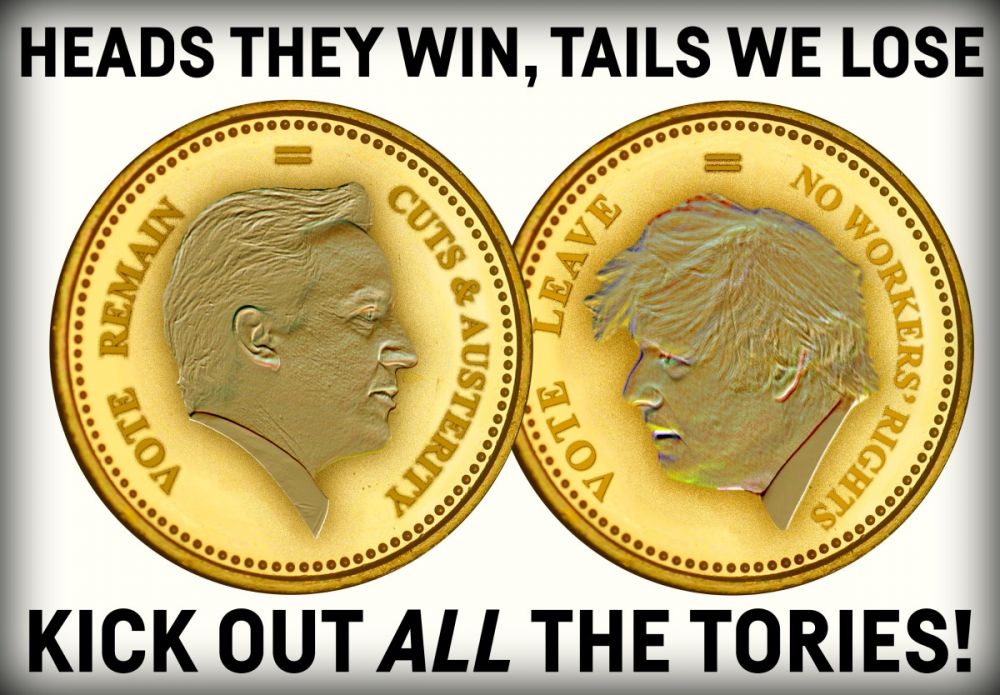 Britain goes to the polls today to decide on whether to Leave the European Union or Remain. The closing speeches in last night’s BBC “Great Debate” by Boris Johnson, the Conservative former London Mayor, and Ruth Davidson, leader of the Scottish Tories, summed up what this referendum has been from the outset: a fight between two wings of the Tory Party; a fight in which neither side has anything positive to offer workers and youth.

On the Leave side, it is clear that the leaders of the Brexit camp have appealed to the worst fears and prejudices in society, whipping up a xenophobic hysteria around immigration. Boris and Gove, amongst others talk about “taking back control”, with Johnson even describing the possibility of Brexit as “Britain’s Independence Day”.

What these Tory Leave leaders fail to mention, however, is that it is they in Westminster and their friends in the City of London who have been very much in control over the past six years, willingly carrying out the very austerity and attacks on workers that the EU and its institutions are implementing in Greece.

On the Remain side, the campaign to stay in the EU has - despite the best efforts of Jeremy Corbyn - been led and dominated by Tories and Blairites who are almost indistinguishable from Brexiters such as Boris. They too pander to xenophobic rhetoric, talking about the “pressures on public services caused by migrants” and calling for a “tougher line on immigration”. They too support privatisation, austerity, and anti-trade union laws.

The fact is that the options available in this referendum are between a Boris Leave and a Cameron Remain. But these two Tories are identical in their programme. They are both cut from the same capitalist cloth. A vote for either is a vote for further cuts and attacks on migrants, workers, youth, and the poor.

Many honest Lefts have stated that they will be voting Remain to “keep out the racists and the far right”. Those who will be voting to Leave, however, will not be doing so out of simple racism, but out of a genuine concern regarding jobs, housing, and public services, which have been battered not by mass migration but by the general crisis of capitalism.

One thing is for certain: the forces of reaction will not be beaten by the labour movement hitching its wagon to that of Cameron and co. The rise of Euroscepticism and right-wing populism is not a problem unique to Britain, but is a phenomenon being seen across Europe (and the USA) as people look towards demagogic figures such as Trump in America, Le Pen in France, and Hofer in Austria as they grapple for a lifeline to lift them out of the chaos and crisis of capitalism. The far right and their poison of xenophobia can only be defeated by eliminating the social conditions - created by capitalism - in which they thrive.

The Myth of Social Europe

Ironically, the leaders of the labour movement are looking towards the EU to protect against the worst excesses of Tory cuts and attacks on workers’ rights precisely at a time when the “Left” government of Syriza in Greece is carrying out the very same programme - of endless austerity, mass sell-off of public assets, and generalised assault on workers’ terms and conditions - under the explicit duress of the European Union and its unelected bureaucracy.

The pro-migrant credentials of the EU, meanwhile, have been shattered by the shameful deal conducted between Merkel and Turkey to deport refugees from Greece. Far from welcoming in migrants, the continent has become “Fortress Europe” for those on the outside.

A vote to Remain will not be a vote for Corbyn’s vision of a “social Europe” of stronger workers’ rights, more freedom of movement, and greater environmental protection, but the polar opposite: attacks on trade union legislation, scapegoating of migrants, and the enshrinement of privatisation and deregulation through free trade deals such as TTIP. It will be a vote for the programme of Cameron, Osborne, the Blairites, and the majority of the Establishment, big business, and the banks.

Rather than sowing any illusions in the EU, we must tell the truth and provide a warning to Corbyn: a Corbyn-led Labour government, committed to opposing austerity, defending the NHS, and re-nationalising the railways, for example, would quickly come into conflict with the capitalist club that is the European Union. To carry out its programme, such a Corbyn government would have to break with the EU and make an internationalist call to the workers of Europe to follow suit and fight for a socialist alternative.

In the absence of genuine mass Left leave campaign, however, we cannot support a “Brexit” led by gangsters such as Johnson and Gove, which will not be a blow against the bosses’ EU, but only a boost to the careers of the most reactionary elements in the Tory Party.

In this respect, neither Leave nor Remain offers a real alternative for workers and youth. We cannot take sides in a fight between two sections of the ruling class. The only option for socialists is to say “a plague on both your houses” and reject both reactionary camps - to reject this whole referendum and focus on the task ahead of fighting against austerity, against racism, and for a bold socialist, internationalist alternative.

No to the bosses’ EU! No to Tory Austerity Britain! For the Socialist United States of Europe!

It was the enormous capitalist upswing of the post-war boom that provided the economic foundations for the development of the Common Market and later the European Union. Only thanks to this epoch of expanding world trade and unprecedented geopolitical stability could the limits of the nation state be temporarily overcome.

Now, in the midst of the deepest crisis in capitalism’s history, all the old national antagonisms have re-emerged and the whole European project is unravelling under centrifugal forces. The Schengen agreement lies in tatters, as each government erects barriers to keep out migrants, and the eurozone is collapsing under a weight of debt and trade imbalances. The risk of Brexit, therefore, is not an isolated phenomenon, but merely the latest - and greatest - reflection of this capitalist maelstrom.

“It is now nearly nine years since...the arrival of global financial and economic chaos,” Larry Summer, economics editor for the Guardian notes, “Britain’s EU referendum this week is the latest manifestation of that crisis.”

It has become clear that the idea of European unity on a capitalist basis is a utopia - a reactionary utopia at that, which can only be achieved on the basis of the subjugation of the weaker economies (such as Greece, Portugal, Spain, and Ireland) by the stronger nations, primarily German capitalism.

Whatever the result of the referendum, the fundamental process of crisis at all levels is already underway. A new world slump is on the horizon; the European Union faces an existential crisis; and the knives are out as the Tory Party faces its own internal civil war.

Either In or Out, the problem remains the same: the crisis-ridden capitalist system. And Leave or Remain, it is the working class that will be asked to foot the bill through cuts and attacks on jobs, wages, pensions and public services.

The only way forward for workers and youth is to unite and fight for a socialist Europe. In Britain, this fight should begin with Corbyn and the leaders of the labour movement mobilising a mass movement around a bold socialist programme in order to kick out Cameron, Boris, and all the xenophobic, tax-dodging Tories.

No to the bosses’ EU! No to Tory Austerity Britain! For the Socialist United States of Europe!