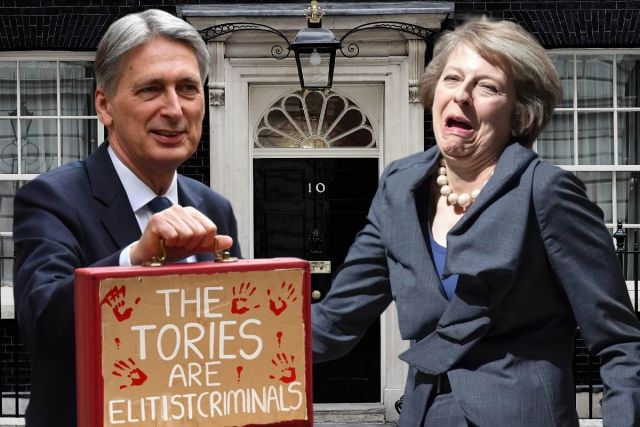 The Brexit negotiations appear to have ground to a halt. “There was nothing, zero, no progress,” said one official last week. Not surprisingly, there is now a deep sense of frustration, not to mention deep anxiety, about where things are heading. Philip Hammond, the current chancellor, has even warned that a “no deal” scenario would ground all aircraft on day one, clog up all the ports and impose a “hard” border in the North of Ireland.

Britain is certainly heading towards a period of massive upheavals and uncertainty. Even without Brexit, the economic climate looks bleak. Already, the International Monetary Fund, in its twice-yearly World Economic Outlook, has sharply reduced its forecast for Britain’s long-term growth outlook. The estimated annual growth will be the weakest in Europe - and even trails behind growth in Greece over the next five years!

Britain has fallen from the top to the bottom of the league table of G7 economies in the year since the Brexit vote, only growing by 1.5% in the 12 month period.

The Office for Budget Responsibility is likely to follow suit and drastically cut its forecasts for the economy. “[Our previous] relatively pessimistic view, that the financial crisis had done permanent and large but not increasingly large damage to the economy’s productive potential, has not been pessimistic enough,” said Robert Chote, chair of the OBR. The performance upswing in 2016 now appears to have been a “false dawn”, said Chote, after productivity declined by 0.7 per cent during the first half of 2017. For good measure inflation has now hit the 3% mark.

This will offer little cheer to Philip Hammond as he plans his November budget. Treasury officials have already said Hammond is facing “a bloodbath” in the public finances in his next Budget, as weak economic forecasts derail the government’s plans. With the biggest fall in living standards since 1750, according to the Institute of Fiscal Studies, there is growing anger and resentment.

The government is in crisis. The Tory party is in turmoil. The whole system is in an impasse. “There are decades where nothing happens; and there are weeks where decades happen,” explained Lenin before the Russian Revolution. All the contradictions within the economy are coming to the surface. British society itself is heading for a revolutionary explosion.

Today, millions are looking to Jeremy Corbyn and the Labour Party to offer a way out. Such is the changing situation that an election could be called at any time. Labour could be propelled to power on a left-wing programme. However, it will be faced with a serious crisis of capitalism, even a new world slump. Even the IMF has already warned that the dangers to the global financial system are “starting to loom”.

Clearly, big business will show its real face, backed up by a venal press, in defence of their class interests. As in the past, they will do everything to bend the government to its will. They will exert colossal pressure. However, given the crisis, there will also be remorseless pressure by the workers to carry through radical anti-capitalist measures and move towards a real change in society. The ruling class dread that Corbyn will be pushed much further than before. They will lean on the right wing within the Parliamentary Labour Party to act as a brake on any radical administration.

A Labour government will then be faced with a stark choice. Either it will use the capitalist crisis as an excuse to wind back on its promised reforms, or it will use the crisis to carry through a bold socialist programme. There is no middle road in such a situation.

Labour to power on a socialist programme

We have no hesitation in saying what should be done. In order to carry out the promised reforms and transform the lives of ordinary working people, Labour must take decisive action to take control of the economy.

This means nationalising not only the public utilities and railways, but also the 150 giant monopolies, banks and insurance companies that dominate the British economy. These should be placed under democratic workers’ control and management. Then, using a socialist plan of production, the rich resources of Britain can be used for the benefit of all and not the interests of a few billionaires.

This would allow a left Labour government to massively raise living standards, cut the working week, and boost the social wage. The scourge of poverty, unemployment and homelessness can be eradicated overnight.

A socialist Britain would become an example for workers everywhere, currently mired in austerity and crisis. It would urge others to follow suit and break with the rule of capitalism. Rather than a capitalist EU, we would establish a socialist united states of Europe as a stepping stone to a socialist world order.

With the Tories threatening a “bloodbath”, the need to change society has never been more relevant than today.