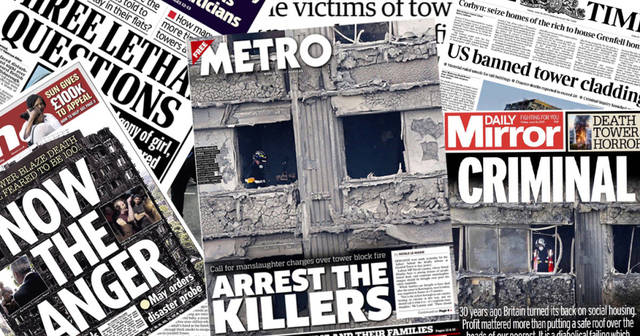 London and the whole of the UK are in a state of shock and visceral anger at the tragedy and crime that is the Grenfell fire. All the accumulated rage within the local working class community has exploded to the surface, as more and more details emerge showing how the Tories and profiteering management companies are culpable for the murder of the tower's residents.

Already, Theresa May has drawn criticism for her impersonal and aloof response to this disaster and its victims - a reflection of how out of touch the rich and the Establishment are from the lives of ordinary people in general. These latest events have only added for the calls on her and the Tories to go.

We publish here a report by Nico Baldion of Kensington & Chelsea Momentum (personal capacity), who discusses the mood of palpable fury on the ground in the local community.

Yesterday and today I’ve been speaking to people in the area, which I also come from, and helping them out. People are furious. They see the fire as an expression of a class war in the UK.

Yesterday evening I went to a community centre near the Grenfell tower. A friend had informed me they were in need of volunteers. When I arrived they had too many volunteers and too many donations - such is the solidarity of working class people!

It is truly amazing to see such solidarity; the working class of all colours and creeds coming together to support one another. Not being able to put myself to any use (which I suspected would be the case) I had a walk around and talked to people.

There was an immense outpouring of solidarity, humanity, and empathy. There was a palpable grief in the air as people faced the trauma and uncertainty for friends and loved ones. There was a sense of determination, and just under the calm surface there was brewing a deep and righteous wrath.

Today I have been manning a Kensington & Chelsea Momentum stall in Ladbroke Grove, which is very near to the disaster. Many of the comrades with whom I am organising here have friends and family from Grenfell who are missing. Talking to them, I find myself occasionally having to take a break from the stall to go around the corner and shed a tear.

This mood was reflected in the video posted this morning in which a man from the area says when interviewed by the media:

“What do I want to happen? I want there to be a revolution in this country. Fuck the media! Fuck the mainstream - you don’t deserve to be there. They act as mouthpieces for this corrupt government. People need a revolution in this country nothing short of that. We’ve seen how the mainstream media have hounded and demonised Corbyn, saying he’s unelectable, and you created that narrative and people believed your bullshit, for a while. But the election has shown people are immune to the billionaire, Rupert Murdoch media.”

At our stall we presented a list of demands, which you can see on our leaflet (below).

Another comrade who is a trainee nurse has produced a video describing the experiences he had treating victims through the night, as well as his thoughts on the wider situation. These are his words:

As is already well known, there were ominous blogs written as far back as 2013 about lack of fire safety in the tower, residents clamouring for safety in their own homes and this is what happens when it falls on deaf ears. A stark reminder of how the richest borough in London has some of the poorest and most inadequate housing. The standard of housing across all of Britain is appalling and people in tower blocks all over the nation will be reeling.

And I saw the bare face of this tragedy as it came through A&E in the early hours of the morning and throughout the day. But this was no accident. This is the brutality of capitalism. Ineptitude, greed, deceit and profit motive. I listened intently as a survivor told me of her harrowing story of how she escaped from the building, nearly second guessing herself to go back for some sentimental possessions, but before she could turn around the hallway was engulfed with flame. I was told by co-workers in resuscitation how an entire family’s lives were needlessly cut short that night in our hospital. I saw and gave what little help I could to children who may or may not have survived being wheeled through the corridors, suffering. We have missing mental health patients, we have missing NHS staff, still unaccounted for, as are countless others.

I spent my lunch speaking with relatives who had no idea where their loved ones were, you could feel the despair fill the room. As people were slow dripped information, some burst into tears as they rushed out the room, what can you do in this situation? You feel powerless. But we aren’t powerless together. Private landlords, parasites they are, don’t even have legal obligation to make homes fit for human habitation. There are more empty homes in the Kensington & Chelsea Borough than any other in London, so why are the survivors sleeping in a sports centre? We have to carry, elevate and ring out the clear class anger we see spilling over of the survivors, community & relatives, and change this rotten system.

People in the UK are waking up to the reality of capitalism in the 21st Century. A revolutionary mood is stirring. Let’s unite to overthrow this fragile government and fight for a socialist Labour government that puts an end to this diseased system.