It didn’t take long for the Liberal democrat leaders to understand that any principles they may have had are far less important than their own personal careers, and even less important than the needs of the market. All the election campaign rhetoric went out the window as they join a coalition with the Tories, whose task will be to carry out a draconian anti-working class programme. 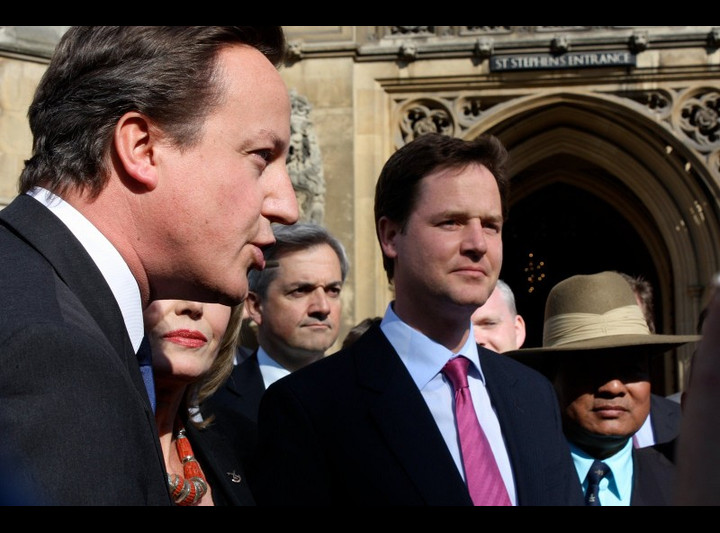 Yesterday (Tuesday), Gordon Brown was forced to resign twice, first as Labour leader, then as Prime Minister after coalition talks broke down between Labour and the Lib Dems. It was a humiliating and inglorious end for New Labour after 13 years in office. It marks the end of the New Labour Project, the key architects of which were himself, Blair and Mandelson.

Over the last week, the New Labour politicians, starting with Lord Mandelson, were desperate to get a deal with the Liberals as part of a so-called “progressive coalition.” As with Tony Blair in the build up to 1997, they were keen to heal the split with the Liberals that took place over 100 years ago. They are from the same stable and feel at home with the SDP types who joined the Liberals to form the Lib Dems in the fallout from their failed attempt to split the Labour Party in 1982.

These new negotiations, however, fell apart. “At just before 1pm, Lord Mandelson and Lord Adonis, the two Labour negotiators most enthusiastic about the prospect of a Lib-Lab pact, were seen trudging gloomily across New Palace Yard, resigned to defeat,” commented the FT.

The attempt to forge a Lib-Lab deal also provoked opposition with Labour’s ranks. Tom Harris, MP for Glasgow South, attacked those who were “willing to barter away” their principles for a chance to be in power. Paul Flynn MP described any Lib-Lab pact as a “vision of hell.”

The defeat was a defeat for New Labour and the market economy. The right wing will now correctly be blamed for allowing the Tories back into power. The Labour Party will be thrown into a struggle for the new leader, which will be decided by the September party conference. The right wing and the capitalist press have put their support behind David Milliband, a creature of New Labour. Nevertheless, this will not be easy given that the blame for losing the election will be placed at the feet of the Blairites by many in the movement.

The Blairites are hoping against hope that things will get back to “normal” as if the defeat had nothing to do with them. We even see the sickening sight of Alan Johnson, the former Labour Home Secretary, actually wishing the new Cleggameron coalition well. It is like some game where, as in cricket, the first eleven is asked once again to come into bat. It shows how out of touch these career politicians really are with the working class.

Tangled up in blue

Cameron was desperate to become PM and was prepared to offer almost anything to anyone to achieve this. These concessions, especially over electoral reform, have opened up big divisions in the Tory party, many of who see it as a betrayal of right wing principles. But principles are not at issue here. It is a question of political power. When it looked a possibility that a deal was being cooked between Labour and the Lib Dems, following Brown’s announcement that he would not be staying on as Labour leader, Cameron and Hague in a mad panic started promising all manner of new things to the Clegg team to keep them on board. No wonder there is much resentment inside the Tory ranks about how things have gone given the huge poll leads they enjoyed not so very long ago. It is being hidden for now but it will not go away.

“It’s not unanimous, but the overwhelming majority of the parliamentary party are behind David Cameron’s move”, said one Tory backbencher. They were very much caught between a rock and a hard place. Failure to form a government would have meant the end for Cameron and back to the drawing board for the Tories.

Clegg sees this deal is the same light. He has been desperate to get a deal as much as Cameron. Their fates are now entwined, which will mean they will drown together. The fix-term parliaments idea will not save them as things fall apart. In 50 days they are to present a crisis budget that will mark a new era – the era of austerity. All the smiling faces and talk of common purpose will fade way as the pressure starts to grow.

As the Financial Times soberly commented “the rhetoric of agreement cannot mask the sense (that) the Tory party as a whole enters its new alliance as an uneasy, somewhat mistrustful, partner.”

This ‘uneasy’ alliance also goes against the feelings of many in the grass roots of the Lib Dems – as well as those who voted for them. All those who voted Liberal Democrat to get change, were clearly not looking for a new Tory government as the outcome. “Vote Clegg, Get Cameron”, became true. There will be anger and bewilderment in their ranks as the realities sink in. While some felt uncomfortable climbing into bed with the Tories, Clegg has grabbed power with both hands. He has gone so far as to express his “great admiration” for David Cameron and the way he conducted himself. Such gratitude will not rest easy with some of the Liberal rank and file who consider themselves “radical”. But they count for nothing in the leaderships scramble for power. The reality is that both the Conservatives and the Lib Dems are capitalist parties, acting in defense of big business. The illusion of the Lib Dems as being in some way part of a “new politics” is now exposed as just talk. It should be noted that just as Lib Dem coalitions at a local level has seen cuts in public services so we will now see the same at a national level.

Everything is done in the “national interest”, namely the interest of the bankers and big business. This is their main consideration. They hope that the Tory-Liberal coalition will bring stability, but they are completely wrong.

The deals over income tax thresholds for the low paid are dependent on timing and funding. But as they are about to take an axe to public expenditure, any such concessions will be kicked into the long grass, again in the “national interest”. Osborne has promised that some tax cuts for the rich will not be done while they are busy implementing a one-year public sector wage freeze due to start in April. Not much of a concession when you consider how good the rich are at avoiding taxes anyway!

This government, as Osborne said about the Tories before the election, will be the most unpopular government since the Second World War. It will be wracked by crises as they move to cut public spending and push up indirect taxes such as VAT, a tax which hits the poorest the hardest.

The Liberal Democrats will not escape the backlash from this. Their fate is now directly linked to the Tories. In 1931, Lloyd George split the Liberals over the issue of entering the National Government. The Liberals that went in were absorbed by the Tories, while Lloyd George hoped to gain by remaining outside. The growth of the Labour Party cut across his hopes, but at least he was able to see the consequences of joining the coalition. The present Liberal Party grew out of that split. Now, they will be crushed by the unpopularity of the coalition and the inevitable revival of the Labour Party. The greed for power has forced them to throw all caution to one side. Now they will reap the whirlwind.

Mervyn King, the governor of the Bank of England, warned that whoever formed the government and implements the horrendous cuts that are coming will be so unpopular that they will be out of power for a generation. That is what faces the parties of the coalition. “Now they must share the inevitable opprobrium for some of the toughest decisions Britain has faced since, well, since Mr Churchill’s day”, explains the Financial Times.

The cost of bailing out the bankers and saving capitalism has been immense. The country is still running a fiscal deficit of over 11% of output. This year, 15% of the debt issued by all European states will be British. Only Italy needs to borrow more. Now the working class is being asked to foot the bill. A series of austerity budgets are being lined up. The Lib Dems have been told that this cannot wait.

“Thank you and goodbye”, said Gordon Brown. For the working class, however, this is not goodbye but a massive wake-up call. The coalition government will now attempt to prove itself to the markets and its big business backers.

The working class must learn from our Greek brothers and sisters. Weakness invites aggression. The labour and trade union movement must gear itself up for the coming show-down. This must go hand in hand with the need to transform the Labour Party byclearing out the careerists and New Labour carpet-baggers. We are in unprecedented times. The British labour movement must rise to the occasion. The Marxist tendency will play its full role in this struggle to re-arm the movement and prepare the way for the overthrow of capitalism and the carrying out of the socialist transformation of society.