Britain
Share
Tweet
The Crewe by-election, with an 18% swing to the Tories, confirms that they are on target for a landslide win in the next general election. Railway workers and other working class people who have voted Labour for generations have finally had enough. The betrayals and disappointments of New Labour have caused these electors to break the habit of a lifetime. Make no mistake about it. Mass working class abstentions have done for Brown and his witless crew. 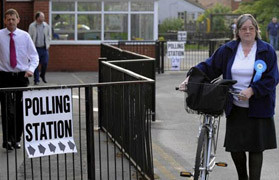 The Crewe by-election, with an 18% swing to the Tories, confirms that they are on target for a landslide win in the next general election. Railway workers and other working class people who have voted Labour for generations have finally had enough. The betrayals and disappointments of New Labour have caused these electors to break the habit of a lifetime. Make no mistake about it. Mass working class abstentions have done for Brown and his witless crew.

The similarities between the Tory Major Government that took over after Thatcher and the position that Gordon Brown finds himself in is obvious. After defeating Kinnock in 1992, it was clear that Major was presiding over a crisis government - and then the bottom fell out of the ERM. Interest rates went up to 15% and the housing market was choked off. The subsequent recession resulted in a slump in Tory support beginning in the South East that the Tories never recovered from. As we predicted (very much against the accepted wisdom inside the Labour Party) the Tories were reduced to a rump in the South East.

New Labour is absolutely responsible for squandering the opportunity provided by 11 years of landslide Labour victories. This is the first Tory by-election victory over Labour for thirty years. As we pointed out before 1997 the programme of New Labour had nothing to offer workers and their families. We also predicted that sooner or later the bosses would line up behind the Tories as the Blair/Brown project would fail.

But there is of course ‘no accounting for stupidity’ specifically the lunacy of abolishing the 10p tax rate a month before the election. It's like rubbing salt in the wound for thousands of families who are stuck with fuel price hikes and increases in food costs. And debt costs. People just stayed at home rather than vote.

It’s worse than that. In the campaign New Labour was quite deliberately feeding the flames of racism. Brown goes on about ‘British jobs for British workers.’ Labour’s propaganda has been vile – aimed at making racism respectable. We all recognise the dog whistles they blow and the code they speak in. They positioned themselves to the right of the Conservatives with slogans like ‘Tories soft on yobs’ and questions like “Do you oppose making foreign nationals carry an ID card?”

Labour lost a huge amount of ground in the by-election. It's obvious that the New Labour project is running into the sand.

The result could have been a wake-up call for the Labour government. They still have two years to turn the situation round. But they seem to have lost the will to live. Faced with mass working class abstentions in the May 1st local elections, they dithered and stuttered instead of fundamentally changing course before Crewe.

The hurling of money at the electorate through a mini-budget in reparation for the 10p tax ‘mistake’ has been treated by the people of Crewe as yet another squalid monoeuvre by New Labour.

The present leadership have proved themselves to be hopeless. The Labour Party needs to be fundamentally transformed if it is to win again.

Regardless of the plans of mice, men and Mandelsons the mass of workers ultimately have no choice but to fight for change under capitalism. Decades of experience of the Labour movement in Britain illustrate that when the workers do move to fight back, then they always move through their traditional organisations.  That means the unions and the Labour Party, in spite of the grand strategies of the sects.

Turning of the tide

The tide has begun to turn in the unions with the magnificent action organised by the PCS, NUT and the UCU on April 24th. There is a distinct possibility that UNISON members may be forced into a corner over pay restraint and, in the current economic climate, the distinct threat of cuts to pay for the New Labour meltdown. Certainly there is a head of steam developing in the public sector.

The wretched John Major hung on right to the last day possible before the electorate booted him out of Number 10. Likewise Gordon Brown could hang on till 2010. Brown has already shown us how New Labour can throw away elections. Instead of just watching New Labour steaming full speed ahead towards the iceberg, and opening the way for a Tory government, it's time to reclaim the Labour Party for the working class.

Brown wants to get away with more years of below-inflation wage increases for 6 million public sector workers. We can't put up with that! The state sector trade union leaderships need to launch a united battle against wage restraint now and not just sit round hoping something will turn up.

As we have explained before, the mass of workers need to experience a Labour Government before they would begin to draw more radical conclusions. John McDonnell’s opposition, and his readiness to stand against him as leader, reflects this process in embryo. It's the turning of the tide, the beginning of the beginning of that change.

For a Labour government on a Socialist Programme!