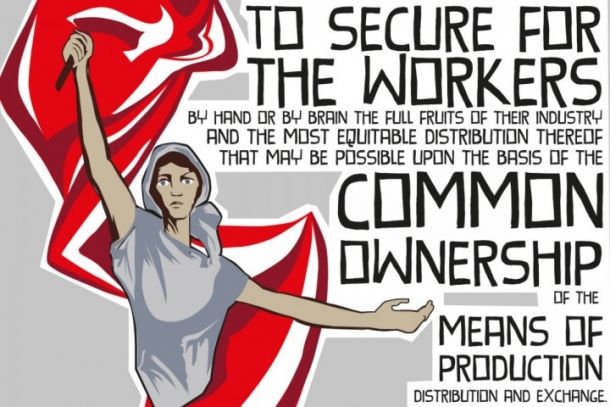 The Labour4Clause4 campaign set up by British supporters of the IMT held a hugely successful fringe meeting at this year’s Labour Party conference. Around 80 people attended the meeting, held on 25th September, to hear about the importance of reinstating the historic Clause 4, which represented Labour’s commitment to socialist values.

The fringe meeting was the culmination of a great week in Liverpool for the Labour4Clause4 campaign. Prior to this year's Labour conference, it was reported that the campaign's motion to restore Clause 4 has made it onto the agenda for next year's conference.

This is extremely exciting news, and will hopefully mean that in a year's time delegates will have the opportunity to hammer the final nail into the coffin of Blairism and privatisation.

Meanwhile, there was a great deal of interest in the campaign from delegates and visitors. Hundreds of people added their names to the campaign's statement, including a number of left-wing Labour MPs, and many copies of our pamphlet Nationalisation: why we need it were sold.

Of course, the campaign was given a big boost by John McDonnell's speech at conference, where the shadow chancellor quoted the wording of the original Clause 4, describing this socialist clause as being "more relevant than ever".

The disaster of privatisation

It was no surprise, therefore, that the campaign's fringe meeting saw a packed room of attendees on the Tuesday evening, to hear speakers on the panel from a variety of unions, including the RMT, the bakers’ union, and the CWU.

Steve Hedley, senior assistant general secretary of the RMT spoke about the history of Clause 4 and the importance of having nationalisations that are worker-led and controlled, and not imposed from the top down or only applied to struggling industries.

As a leading figure in one of the major rail unions, Steve described the nationalisation of Britain’s railways as “vitally important”, and a key example of how privatisation has failed the workers and people of Britain.

You can hear Steve speaking further on this issue in the clip below from Radio 4.

Ian Hodson, president of the BFAWU (Bakers, Food, and Allied Workers Union), explained the vital need for Clause 4 in order to secure a society that is fair for everyone in it.

Hodson also gave an update to the meeting of the BFAWU union’s Time for Ten campaign, which aims to secure a £10 per hour minimum wage for all, as well as announcing the great news that Uber Eats drivers have gone on strike in London alongside workers from McDonalds, TGI Fridays, and Wetherspoon in a fight for decent pay.

The panel also included Lee Waker, a Labour councillor, who shared his experiences of strikes as a member of the CWU, which organises postal workers - who have seen first hand what privatisation entails.

Lilly Cockwill, a university student, also spoke to the meeting, highlighting the extent to which privatisation has affected the lives of young people - from education to living conditions - and the dangers that zero-hour contracts pose to young workers.

An idea whose time has come Rob Sewell, coordinator of the Labour4Clause4 campaign, concluded the speeches by combatting the common arguments against Clause 4. Rob pointed out that it is in fact capitalism that is out of date, not Clause 4 and the socialist ideas that it represents.

Worker-led nationalisation would ensure that the people who make the wealth in Britain - the working class - get the full fruits of their labour, not the parasitic bosses and fat cats who have stolen from workers for too long. The discussion that followed raised questions about the concrete plans to move forward with the campaign, and how to involve groups such as Young Labour. Above all, audience members wanted to discuss the fight needed to reinstate Clause 4 at next year’s conference.

The mood of the room was electric and optimistic. Many attendees spoke of how it was more than time to bring back Clause 4 and break with New Labour once and for all.

The meeting was a fantastic success. But everyone present concluded that this meeting by itself clearly isn’t enough. Support for the campaign has to be maintained and ramped up over the next twelve months - in order to make the reinstatement of Clause 4 a priority for next year’s conference and to ensure that this important task is carried through.