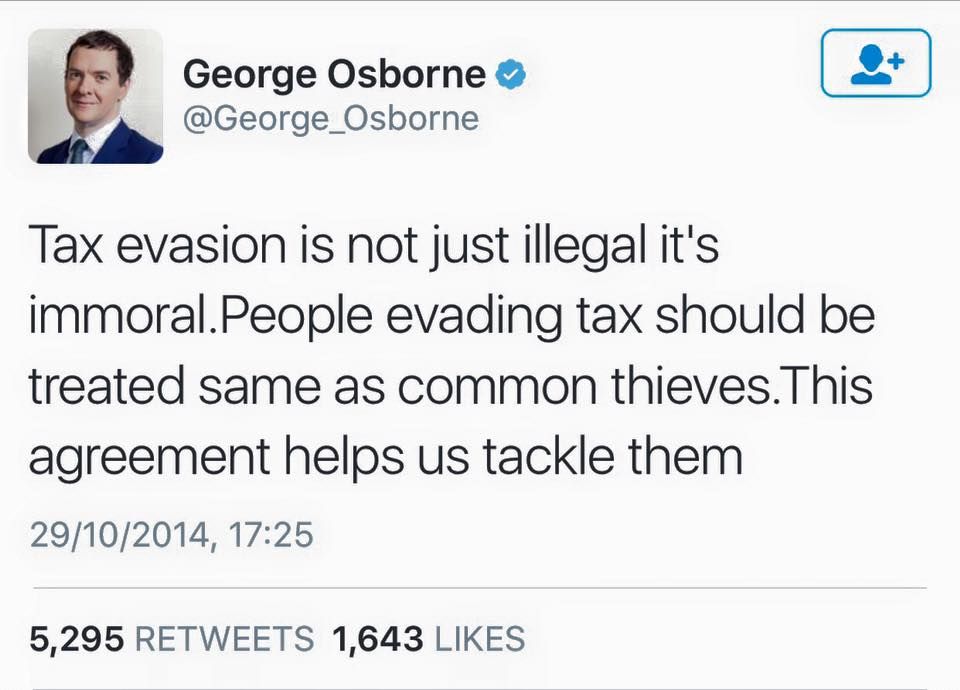 “It’s not fair on hardworking people who do the right thing and pay their taxes to see these sorts of [tax avoidance] scams taking place.” - David Cameron (2012)

Four years after this statement, in which the Prime Minister described a prominent British comedian as “morally wrong” for exploiting tax loopholes, David Cameron has admitted that he owned over £30,000 of shares in an offshore company set up by his father to avoid tax, which he sold in 2010 just before he and the Tories came to power. This was not declared to Parliament, and in four statements released over three days this week, Cameron repeatedly misled journalists over the subject, implying that he had never had anything to do with offshore, tax-avoiding companies. His confession last night shines a spotlight, not only on the kind of person Cameron really is, but on the kind of people the Conservative party really represent.

For many people this has not come as a big surprise. Cameron is known to have come from a wealthy family, and even to be a distant relation to the Queen. As comedian and journalist Mark Steel, writing in the Independent, puts it: did we really think that Cameron put himself through Eton on a paper round?

But it is one thing to have a general impression, based on stereotypes and circumstantial evidence, and quite another to hear the Prime Minister admit in a television interview that he is guilty of the same moral degeneracy of which he has accused others so hypocritically, at the same time as having spent six years lecturing ordinary people (whose fathers don’t have a £10m fortune) to “live within their means”.

It is this slimy, two-faced behaviour which has enraged people to the extent that, at the time of writing, a poll on the Mirror newspaper website asking “Should David Cameron resign?” has 95% of the thousands of responses answering in the affirmative. The Labour MP John Mann has also demanded Cameron’s resignation for failing to declare his interest in the offshore company, and a demonstration has been called at Downing Street tomorrow to demand that the PM step down.

Government of the rich, for the rich, by the rich

However, Cameron’s resignation, though welcome, would not solve any of the problems of tax avoidance. He is simply a political representative of a class of people who are now under the spotlight globally thanks to the Panama Papers, and who are eye-wateringly wealthy and fully ensconced in the world of offshore tax avoidance. Were he to resign, Cameron would simply be replaced by another loyal representative of this parasitic class of the bosses and bankers.

The entire Conservative Party is mired in this scandal. Six Tory MPs are named in the Panama Papers, and the major Tory donor Lord Ashcroft is also on the list. The late vice-chairman of the Tories, John Maples, who was also an MP and a minister, set up the Maples and Calder law firm which has been described as the largest tax avoidance law firm in the world. Zac Goldsmith, the Tory candidate for Mayor of London, who has his family wealth in a trust in Switzerland, was registered as non-domiciled in the UK for tax avoidance purposes until 2010 and owns two expensive houses through companies registered in the Cayman Islands. As the party of the capitalists, the Conservatives are awash with wealthy tax dodgers. These people populate the party from top to bottom - they are rotten to the core and therefore incapable of representing anyone other than the super-rich capitalist class.

Cameron’s leadership of the party was supposed to be a break with Thatcher’s “greed is good” image. He tried to reinvent the party as a pro-environment, “hug-a-hoodie”, “all in it together” outfit. Over the last six years of Tory government this charade has been undermined and eroded bit by bit, and this latest scandal is another enormous nail in the coffin of the “Caring Conservatives”. The Financial Times has recently unearthed a letter from Cameron, sent in 2013 to the then president of the European Council, asking him to stop offshore trusts being dragged into an EU-wide crackdown on tax avoidance. This blows out of the water the image that the Tories have been trying to cultivate for themselves of being tough on tax avoidance.

On top of that, the Panama Papers have revealed that half of all tax avoiding companies created by Mossack Fonseca are registered in British administered territories, over which the Tory government has direct control. Furthermore, Mossack Fonseca is not even one of the top ten tax avoidance law firms in the world; in fact, almost all of those top ten firms are London-based organisations. And it is British banks who are most frequently used as middlemen for offshore bank accounts, with the London branch of HSBC being the worst offender. The City of London has been described as at the centre of a global spider’s web of tax avoidance, stretching from Guernsey and Jersey to the British Virgin Islands.

This is the state of the British rentier economy which derives its income from “financial planning”. This ignominious collapse of the former “workshop of the world” is a process that began under Thatcher and has been continued by Cameron. This is the reality of modern British capitalism and its representatives in the Conservative party.

Cameron and Osborne have always seemed somewhat out of touch with ordinary people - especially since Jeremy Corbyn has become leader of the Labour party and the electorate have an honest politician with whom to compare the Tory Eton clique. This is why the brutal austerity being imposed by the Tories has been so galling and has provoked waves of industrial action and mass demonstrations - why should we pay for a crisis we did not cause while the rich and the elite are sitting on a massive personal fortune?

Cameron’s confession has widened this gulf even more. He looks like a liar and a tax cheat, in the same category as Putin’s inner circle, the King of Saudi Arabia, and members of the Chinese Politburo. The protests that have ousted Iceland’s Prime Minister this week will not be far from people’s minds as this news about Cameron sinks in.

Cameron, already running around frantically trying to put out one fire after another, is currently asking the electorate to trust him when he says he has negotiated a good deal for the UK in the EU. His implication in the Panama scandal is a massive blow to his authority and credibility, marking a serious setback for him and his allies. Iain Duncan Smith’s resignation, ostensibly over the government’s attempt to fund tax breaks for the rich by cutting support for disabled people, could strengthen the Brexit camp against what is increasingly seen as the welfare-slashing, tax-avoiding Remain camp. In a neat microcosm of the dead-end of British capitalism, Cameron’s behaviour, so typical of the British ruling class, could have seriously damaging consequences for that very same class of people if Britain leaves the EU.

For Corbyn and the Labour Party, now is the time to go on the offensive. Corbyn should not limit himself to just calling for Cameron’s resignation, nor just to calling for an end to tax avoidance. The revelations and events that have taken place this week have set the stage for far more radical demands.

Corbyn should demand a general election, on the basis that a Conservative Party being choked by its own shady financial deals is unfit to run the country. He should mobilise the trade union movement for a general strike, on the grounds that the working class should not be made to pay for the crisis of capitalism when there is more wealth in British-administered tax havens than is produced in the UK in one year. This wealth, and the big businesses of those who have been avoiding tax for so long, must be expropriated and used to properly fund the NHS, education and the welfare state.

Corbyn should be making the argument for a complete overthrow of capitalism, because cheating, lying and using any means possible to get rich are the pillars of the capitalist system. So long as such a system exists, scandals like this one are inevitable. Now is the time to strike a decisive blow against capitalism and for socialism.