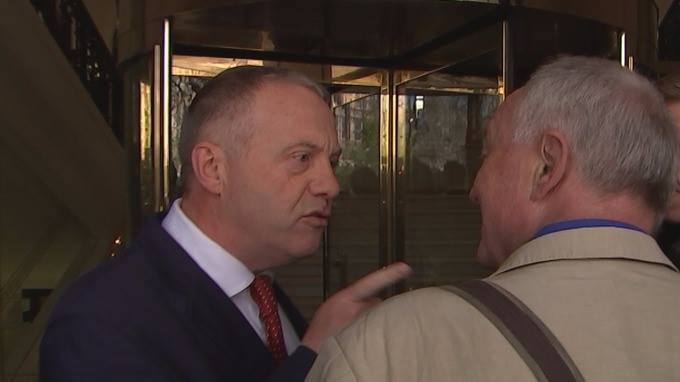 Just a few days before the May elections, the Blairites in the Labour Party have stepped up their war against Jeremy Corbyn, using the slur of “anti-Semitism” to further their aims. By doing so, they are hell-bent on creating a “crisis” within the Party.

They conveniently dug up a stupid remark about Israel made two years ago by Naz Shah, the Bradford West MP, to force her suspension and attack the Corbyn leadership for being “soft” on anti-Semitism. They deliberately stirred up a hornets’ nest, using their friends in the capitalist media, claiming that anti-Semitism was rampant amongst the Left of the Party, especially in the new intake of Corbynistas.  This is a complete lie. But why let the truth get in the way of a good smear campaign?

They then picked on some remarks made by Ken Livingstone, the former Labour Mayor of London, who mentioned Hitler's historical relations with Zionism, to whip up the media storm to a new level. This was sufficient to bring about Livingstone’s suspension from the Party. This also conveniently removed him from Labour’s Executive Committee, where there is a fine balance between Left and Right.

The whole episode has been stage-managed. Bullyboy John Mann, Blairite MP for Bassetlaw, was suddenly in front of the BBC TV cameras jabbing his finger at Livingstone, calling him a Nazi apologist and accusing him of being deranged. The confrontation, on a stairwell at the Millbank television studios at Westminster, was a deliberate set-up and served to project the anti-Semitism row to the top of television news bulletins, as planned. The whole scene was an organised smear by the Blairites, and used to maximum effect. This was used to force Corbyn to suspend Livingstone for “bringing the Party into disrepute”. The Blairites, who have been bringing the Party into disrepute for years, had got their scalp, but they wanted more blood spilled to rid the Party of the “plague of anti-Semitism” and of Corbyn! It is no accident that most of these Blairites are members of ‘Labour Friends of Israel’, a pro-Zionist front which defends the Israeli government’s policies. Those who criticise the policies of the Israeli government are generally branded as anti-Semitic.

Of course, John Mann, despite his abusive behaviour walked away with a mild telling off. Talk of his suspension for “bringing the Party into disrepute” was quickly squashed by the right-wing Chief Whip Rosie Winterton. In fact, Mann had the full support of the Blairites, who regarded him as a hero for his actions.

“John spoke for many of us within the Party when he confronted Ken Livingstone. Frankly, if we as a Party had listened to John a long time ago about Ken Livingstone we would have taken action before now … I was furious this morning and I still am angry."

“I don’t know how I would have reacted if I had seen Ken. I think John Mann, like many of us, is sick and tired of the flat-footed and woeful response of the Labour Party in tackling antisemitism within our own ranks.”

Other right-wing MPs quickly joined in the sordid attack, including Jess Phillips, Conor McGinn and John Woodcock. Luciana Berger, a shadow cabinet minister, said Livingstone should be suspended from the Party. Sadiq Khan, Labour's mayoral candidate, swiftly intervened to call for Livingstone to be expelled.

Rabbi Danny Rich, chief executive of Liberal Judaism and a long-time Labour member, chimed in by saying that “Suspending him from the Labour Party is not the end of the matter. Livingstone is a symptom, not the cause. I am nervous that by focusing on one large personality, we are not dealing with the issues which led him to make such a statement. The first step is to admit you have an institutional problem.”

But there is no “institutional problem”. This "crisis" is nothing to do with anti-Semitism and everything to do with undermining Corbyn and his supporters. It is a stick to beat the Left leadership. This whole dirty business is a smokescreen to attack Corbyn and destabilise the Party before the May elections. The Blairites hope that a setback in these elections will provoke a backlash against Corbyn.

“The row over alleged anti-Semitism in the Labour Party has been taken up with relish by Mr Corbyn’s critics, who believe he has attracted left-wingers who hold strong anti-Jewish views”, explained the media.

Stirring the pot, Jeremy Newmark, chairman of the Jewish Labour Movement, which has been affiliated to the Party for a century, said there appeared to have been a rise in anti-Semitism on the Labour Left since Corbyn became leader last year. This is nothing more than a smear.

Last night, the anti-Corbyn Labour MP for Barrow-in-Furness, John Woodcock, appeared on Channel 4 News saying there was a major problem with anti-Semitism on the Left of the Labour Party arising from its past support for the Soviet Union! He demanded an enquiry to uncover this “problem”, but failed to produce a shred of evidence himself to back up his claims. The young Jewish left-wing Corbyn supporter who also appeared on the programme said he had never experienced anti-Semitism in the Party. For him, the proponents of anti-Semitism are the far Right and not the Left. Woodcock couldn’t answer but simply reiterated his call for an inquiry. As Goebbels once said, if you repeat a lie often enough people will believe it. That is what the Blairites are attempting to do.

This shows how far these Blairite, careerist, carpet-baggers are prepared to go to secure the removal of Corbyn. With the backing of the press, the right-wing are determined to take back control of the Party, no matter what it costs. That is the real explanation for this present row over anti-Semitism. Nothing more, nothing less.

Asked if there was a “crisis” in the Party, which the Blairites attempted to provoke, Corbyn said “It’s not a crisis. There’s no crisis.” In a swipe at the Blairite MPs he said trouble was being stirred up by people “nervous about the strength of the Labour Party at a local level”.

The Jewish Socialists’ Group issued a statement correctly stating that “accusations of anti-Semitism are currently being weaponised to attack the Jeremy Corbyn-led Labour Party with claims that Labour has a ‘problem’ of anti-Semitism.

“This is despite Corbyn’s longstanding record of actively opposing fascism and all forms of racism, and being a firm a supporter of the rights of refugees and of human rights globally.”

There is a problem in the Labour Party. However, it is not anti-Semitism. It is anti-Socialism and pro-capitalism that exists in the Parliamentary Party. This body is dominated by Blairites who are out to remove Corbyn and rescue the Party for capitalism. They are a bunch of careerists who should face immediate deselection and be replaced with real socialists who are prepared to fight for working people. Millions are looking for fundamental change. The task is not to patch up capitalism but to do away with this rotten system and replace it with a socialist society, based upon need not profit.