Details
Socialist Appeal Editorial Board
07 May 2010 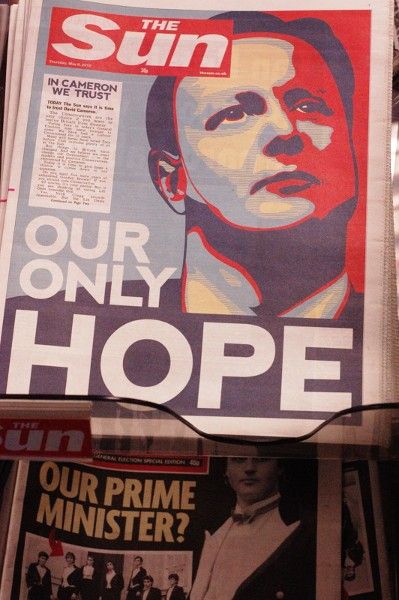 The British elections have produced a hung parliament, with no party winning an outright majority, precisely the opposite of what the ruling class wanted. They need a "strong government" to take on the working class in the coming period. That attack will come anyway, and the labour movement must prepare to fight back.

Who has won the election? Everybody has lost. The ruling class was quite clear what it wanted and needed. There is a crisis. They need to unload the burden of the crisis on to the backs of the working class. To achieve that they needed a strong majority Conservative government ready and willing to put the boot in to jobs and public services. The election hasn’t delivered it.

The Tories have not been able to make the breakthrough to majority government, despite the most favourable political situation for them for more than a decade. Support from 37% of the voters cannot be considered a mandate for Tory rule. The Liberal Democrats have once again failed to break the mould of British politics. In the end they were squeezed between Labour and the Tories.

New Labour has haemorrhaged votes and support. The scenes of mass support and enthusiasm for change way back in 1997 were utterly squandered and are now seen as a delusion and a distant memory. It is difficult to describe the enormity of the defeat the right wing has suffered. This is the worst result for the Party since 1931. New Labour is utterly discredited, and has demoralised many working class people by its abject failure. It is high time for workers to take stock of this record and draw the necessary conclusions.

This is a result nobody wanted. The country faces an uncertain period of squalid backroom deals and manoeuvres. Socialist Appeal opposes any attempt by the Labour leadership to rule through coalition or informal deals with the Liberal Democrats or any other capitalist parties. We believe that Labour has lost its way by implementing pro-capitalist policies for the past thirteen years. This is no time to be joining hands with openly capitalist parties. During the election the basic policies Labour offered were indistinguishable from those of the Tories and the Lib Dems. They lost because they gave working class people no reason to vote Labour.

The ruling class agenda still stands. They urgently need to cut the government deficit. They intend to achieve that by cutting spending and services. The main parties soft-pedalled the future of austerity on offer during the election itself, but now they are determined to deliver as best they can on behalf of the ruling class.

This austerity programme is not just being imposed from Downing Street and Whitehall. The Tories and the Liberal Democrats dominate our town halls, and local councils too are slashing back on local jobs and services. As we go to press the most likely outcome is that the two capitalist parties come to some form of a deal in order to make their assault on the working class.

“We are entering a new age of austerity,” stated David Cameron for the Tories. “Within months we will be the most unpopular government since the war,” explained George Osborne. “This is an era of hard choices,” chorused Gordon Brown. Nick Clegg has warned his supporters of “tough decisions” in cutting government debt.

This is the language of the 1930s and the Depression. It is a message from the eestablishment: everyone has to take a big drop in living standards to put British capitalism back on its feet. It represents a dire warning to the labour movement and ordinary working people. The massive attacks on workers in Greece, Portugal, Ireland and elsewhere are a sign of what is to come here, whoever ends up in Number Ten.

However, the stampede to bail out the banks and the City of London with hundreds of billions of public money has sent government borrowing through the roof. They have no money for struggling workers, but plenty when it comes to bankers and speculators. At the same time they are paying themselves massive bonuses. This summer, many banks are expected to announce more big profits and bonuses. They have done very well out of the crisis, at our expense.

Now big business wants the government to balance its books and pay back all the loans it used to bail out the capitalist system in its hour of need. There is talk of cuts on a level not seen for generations. This is nothing more than a declaration of war against the working class. It is the biggest challenge the Labour movement has faced for generations.

The election has not yielded the result that the capitalists needed. But they will press ahead with their programme of cuts in any case. All three parties have made what the capitalist class requires into a political consensus, an act of faith. We are told that ‘we’ need to make sacrifices, that ‘we’ need to tighten our belts. Socialist Appeal declares that working class people are not responsible for this crisis and there is not the slightest reason for us to pay the price. We have to fight back.

Effective resistance cannot be organised sector by sector. The bosses will want to split up the workers to blunt the resistance to their attacks. Only a united struggle can offer the way forward, preparing the way for a series of a general strikes of the entire labour movement to force the bosses and the government to retreat.

However, we need to be conscious of the fact that this planned austerity is not down to the callous nature of individuals, but arises from the dire crisis of capitalism itself. The crisis of capitalism means that the system cannot afford the reforms of the past. On the contrary, deep, on-going counter-reforms are on the order of the day!

The only real solution to the problems of working people is a political one. If the capitalist system cannot any longer afford a reasonable standard of living for all, but means cuts and suffering, then to hell with that system. The trade unions founded the Labour Party more than 100 years ago to fight for the interests of working people in parliament. However, the trade union leaders allowed careerists to hijack the Party and use it for their own ends. It is high time the trade unions took back the Party for the working class. This, however, can only be a part of a campaign rearm the labour movement with socialist policies to tackle the crisis.

[A more detailed analysis of yesterday's elections results will follow next week.]