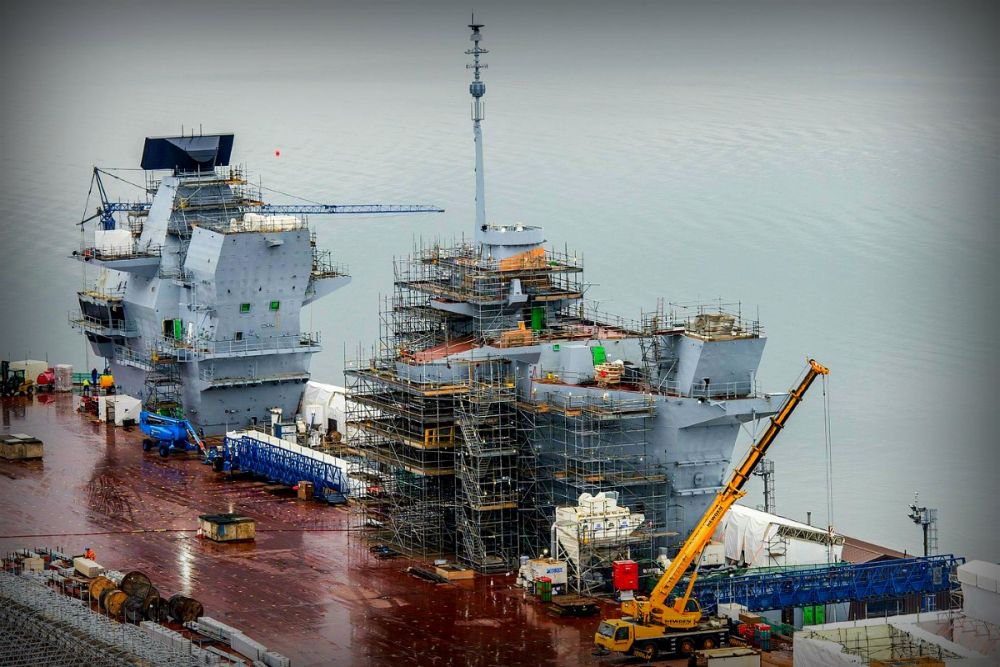 Nigh on ten years from the initial announcement of the building of two aircraft carriers, the first behemoth, HMS Queen Elizabeth, inched towards the sea under the Forth Bridge on its way to its first sea trials.

The ruling class would have liked nothing more than to have turned this event into a jingoistic national spectacle; an opportunity to emphasise ‘British pride’ and ‘strength’. Yet, sadly for these esteemed gentleman, their new military hardware is somewhat of an embarrassment, with even sections of the right-wing press calling, “HMS Queen Elizabeth a £6bn blunder” and foes, such as, Major-General Igor Konashenkov, a Russian military spokesperson, describing the aircraft carrier as, “just a convenient oversized target at sea”.

These two titanic aircraft carriers, with their non-existent aircraft and other numerous problems (including being vulnerable to simple missiles), are just the tip of the iceberg facing the political and military Establishment.

Since the beginning of the ‘war on terror’, UK governments have tried to remould the armed forces from a large scale standing army to one based on expensive equipment backed up with small tactical units to tackle the modern fears of the 21st Century. This reshaping, along with the impact of austerity and long-term deindustrialisation in Britain, has led to a reduction in finance, personnel, and military hardware, creating hysteria and warnings in the press – briefed by leading military figures – of, “Britain no longer being able to defend herself”.

Despite the shrinking military budget, Britain is currently only one of four NATO members who are still meeting the Western alliance’s 2% of GDP on defence commitment. This is a point of great pride for the Tories, who pose themselves as the innate defenders of Britain, while painting Labour as a party of terrorist sympathisers. Yet, with a closer look, it can be seen that in the 2010-15 parliament, UK defence spending was cut by 8%, causing an estimated reduction in military combat capabilities of 20-30%, according to the International Institute for Strategic Studies' (IISS).

The ever-increasing black hole in the naval defence budget, in part because of the new aircraft carriers, will mean further cuts to army spending, who have already seen a reduction in troop numbers of 20,000. The shrinking army has caused alarm in certain quarters, with Britain’s allies worried that the UK could not field the 40,000 “war-fighting” division that is seen as critical for ‘defence’ purposes. This is on top of reports of moral in the armed forces being at a historic low – a problem that is further exacerbated with the MoD set to cut staff by 18,000 by 2020.

The special crisis of British capitalism

Deindustrialisation of the economy and the outsourcing of jobs to cheaper markets in the last 30 years have amalgamated into a special crisis of British capitalism. The main driving force of the British economy today, for example, is not industrial production but consumer spending. While services and the service sector are 12.1% higher than its pre-crisis peak, manufacturing is still 5.6% smaller than at the start of 2008 and construction 1.3% lower.

The numbers that participate in the arms industry workforce, having plummeted over the decades, reflect this general crisis of British industry: from 750,000 in 1980 to 350,000 in 1997, when the official tally was ceased to be kept.

We might cheer initially at the fact that less people are working in an industry that is ultimately about creating profits through death. Yet such a process, left to the unplanned capitalism system, has left once relatively prosperous towns riddled with unemployment and associated ills. No new jobs or socially-useful industries have been created in these areas in place of the long-gone arms industry jobs – and all this without any decrease in the quantity of arms that are actually sold. In fact, arms sales to countries in the Middle East have increased drastically since the 1970s. The exact details and figures within the arms industry are impossible to ascertain due to the shadowy and opaque nature of operations run by governments and big business. But it is suggested that the UK is still between the second and fourth greatest arms seller globally, behind the US and usually Russia, with the vast majority of arms for sale produced in the UK destined for the despots of Saudi Arabia and their barbaric war in Yemen.

In other words, the arms sector has not seen the same levels of relative decline as the rest of British industry. Investment into the production of arms for sale has been largely maintained compared to other industrial sectors, albeit on the basis of fewer jobs, as it is extremely profitable to sell arms to dictatorships. As Lenin once remarked in response to a comment about the horrors of war: “yes, war is terrible – terribly profitable!”

Sir Roger Carr of BAE systems, the largest arms manufacturer in the UK, justified the selling of arms to autocratic dictatorships by stating that, “in our belief…what we are doing is in the interests of peace for the world… We maintain peace by having the ability to make war and that has stood the test of time.”

Sir Carr’s Orwellian doublespeak assertion of “making peace through war”, however, is itself increasingly uncertain. The crisis of capitalism – which has been unabated since 2008 – is forcing more difficult decisions upon capitalist politicians and military staff when they are considering ‘defending the realm’. Military personnel and budgets are increasingly overstretched due to fiscal austerity and the ever-changing turbulent international situation; from growing tensions in East Asia to the ongoing turmoil in the Middle East, it is an impossible situation for a diminished British imperialism to have any influence over.

At root, therefore, the concerns now being openly expressed – with different sections of the Establishment at loggerheads with each other on how to ‘protect’ the British people – are a reflection of the weakened state of British capitalism, which, after decades of decline, is experiencing an ever-reduced role on the world stage and ability to project power.

The opening up of hostilities between representatives of the ruling class is an indication of the turbulent epoch that we live in. Even in ‘normal’ times there are of course always disagreements between different wings of the military about where funding should be prioritised. But the crisis of capitalism, and the tumultuous impact this has had upon international relations, is acting to further intensify these splits.

Although there are disagreements, however, all capitalist political and military commentators agree roughly with the position put forward by the Economist last week, which read,

“Faced with loss of influence from Brexit and a strained relationship with America, Britain needs strong armed forces to make clear its global ambition and willingness to help uphold the rickety international order.” [Our emphasis]

Yet one must ask these well-regarded journalists, where is the magic money tree for additional spending? Would people sit by with huge increases to military spending whilst being forced to endure a decade of austerity? And how would Britain, now a third-rate international power, be able to uphold the “rickety international order”, which is crumbling around us as a result of the world crisis of capitalism and the inability of American imperialism to maintain the global status quo? The truth is that these establishment commentators are maintaining grandiose ambitions for British imperialism that in reality far outstrip what a crisis-ridden British capitalism is able to implement.

Why, we must ask, are we still spending billions on militaristic vanity projects such as the HMS Queen Elizabeth and Trident when we clearly need to spend more on hospitals and schools? Why are skilled workers made unemployed by the closure of the arms factories, when they could be put to use building green energy supplies? And why are we using our industry and talents to build missiles and bombs destined to be dropped on innocent homes in Yemen, when we could be using the enormous productive resources at our disposal to solve the housing crisis in Britain?

The answer to all these is clear: it is the capitalist system, with its insatiable search for profits, and the ruling class, with their insatiable search for prestige and power, that are to blame. This is why we must fight for a socialist Labour government – to plan the economy in the interests of the many, and not for the profits and prestige of the few.