George Osborne, the Tory chancellor, who only six weeks ago was boasting about the strength of the British economy, has now had to issue a bleak warning for the coming year. 2016 could mark “the beginning of the decline” for Britain unless the country swallows a large dose of austerity medicine. A culmination of weakening world growth, plummeting oil prices, and a sharp slowdown in China, amongst other things, has blown Osborne’s economic predictions out of the water. His latest talk is of “a dangerous cocktail of new threats”, which have suddenly emerged.

“Five years ago, when I presented my first Spending Review, the country was on the brink of bankruptcy and our economy was in crisis,” Osborne said in the Autumn Statement.

“We took the difficult decisions then. And five years later I report on an economy growing faster than its competitors and public finances set to reach a surplus of £10bn.”

In a matter of weeks the real weakening position of British capitalism has been exposed. An increase of austerity, as we predicted, is now firmly back on the agenda. In fact, the chancellor has warned about a “creeping complacency” in Britain, with some believing it is now safe for the government to ease back on austerity. This is a clear signal that this year’s Budget will see further financial tightening. “Anyone who thinks it’s mission accomplished with the British economy is making a grave mistake,” he said in a speech in Cardiff.

His remarks are also intended to remind his critics — including those Tory MPs who opposed his £4.4bn cut in tax credits — that the tightening of public finances remains a key priority.

But he warned that economic problems in China, Brazil and Russia, combined with sharp falls in commodity prices and the crisis in the Middle East, were all menacing the global economy.

The euphoria of globalisation has turned into globalised crisis, as stock markets around the world have followed dramatic events in China, where the authorities were forced to close down the stock market twice in one week. This foretells of the increasing upheaval that is on the way.

The sharp decline of China’s currency, encouraged by the authorities to boost flagging exports, has worried investors around the world that such an unexpectedly fast depreciation could further destabilise China’s economy. Some correctly fear it could trigger a wave of competitive devaluations across the region, as they feel the full impact of the Chinese crisis.

Crude oil supplies, meanwhile, are outstripping demand by as much as 2m barrels a day, which has served to push prices below $35 a barrel. The price collapse has hammered the budgets of the world’s biggest producer nations and forced energy companies to reassess hundreds of billions of dollars in future spending plans. Commodity prices in general have also sharply fallen, adding to the squeeze.

“All we have seen so far is the prologue to what are likely to be more dramatic events in 2016”, warns the Financial Times. The over-production of oil, a symptom of the crisis, is set to continue. Concern about bloated stock levels and fears of depleting storage in the US has prompted several investment banks, including Goldman Sachs, to forecast a drop in oil prices to as low as $20 a barrel.

Grinding to a halt

Developing economies last year recorded their slowest growth since the immediate aftermath of the 2008 financial crisis and are facing the prospect of an equally grim 2016, the World Bank has warned.

After suffering through slumps caused by the US subprime and eurozone crises, the global economy was now in the middle of a “third dip” brought about by the slowing of big emerging economies like China and Brazil that was likely to persist for some time, said Kaushik Basu, the World Bank’s chief economist.

Already, 2015 was the slowest growth of the world economy since the crash of 2008-9. Rather than a “take-off”, the world “recovery” has spluttered to a halt. “Last year was the worst for global growth since the crash and this year opens with a dangerous cocktail of new threats,” admits Osbourne gloomily. The growing frictions between Saudi Arabia and Iran only add to this dangerous outlook.

This has forced a whole series of downgrades for future projections of economic growth. Up until now, all the economic commentators were confident that things were improving. But this has all been dashed within the first week of the New Year.

A whole string of weak economic data in the run up to Christmas had already effectively destroyed many of the forecasts in the chancellor’s November Autumn Statement. Instead of the 2.4% growth that Osborne expected for 2015, downward revisions already announced are likely to bring the figure down towards 2% or less when data for the final quarter is released.

Michael Saunders of Citi has already cut his forecast, saying he now expected growth of 2% in 2016 because the economy faces “major headwinds from fiscal restraint and external trade”.

Britain is experiencing falling manufacturing output, together with falling exports. The current account deficit is the highest recorded peacetime and is set to widen further. Investment is historically low, as markets and demand remain weak. All the talk about a “march of the makers” has been confined to the dustbin, as the industrial base of the economy weakens further. The recent collapse of the British steel industry is a case in point. Industrial production in the UK is still struggling to recover from the recession, remaining around 9% below its pre-recession size. Manufacturing industry as a whole is still 4% smaller that it was before the downturn. Despite a recent rise, there has been little sustained movement in business investment. With widespread “excess capacity”, there is no incentive to invest.

The UK economy has therefore been reliant on consumer spending, fuelling increased indebtedness, with savings at a record low of about 4 pence in every pound. The speculative housing boom has also kept the economy afloat, but this is unsustainable.  The accumulated debt burden is still higher than 80 per cent of GDP.

Weakness in inflation is limiting the growth of the cash economy and tax receipts are falling short of expectations, potentially giving the chancellor a difficult Budget to present on 18 March. The budget deficit is still running at about £70bn a year, while Osborne is determined to bring it into surplus by 2019/20. 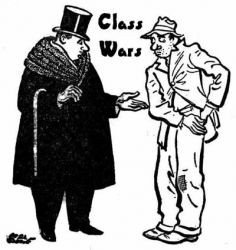 This can only mean one thing: an intensification of the austerity, as we have explained. This austerity is not a product of “ideology”, as many on the Left have asserted, but arises from the crisis of capitalism, which can no longer afford the reforms of the past. On the contrary, we are facing years, if not decades, of deep austerity as capitalism’s crisis deepens further. The “recovery” cycle has reached its peak and has exhausted itself, as can be seen from the current world malaise.

The growing crisis of over-production is also affecting profits, which are now falling. This has not only meant a fall in the rate of profit, but also the mass. There has been a string of announcements of falling sales in the run up to Christmas, accompanied by profit warnings.

A new world slump is on the order of the day, which will have far more serious consequences than the slump of 2008/9. A new slump can lead to a new world depression, which they were only able to avoid last time due to the continued growth of China and the so-called emerging markets. Now China is dramatically slowing down with Russia and Brazil in a deep slump.

In Britain, workers will be drawing political lessons from the austerity. Sharp changes in consciousness are on the order of the day. “Their constituency surgeries are about to be flooded in the next few months with people complaining about cuts,” said one government minister. “They are only just being felt: social services will be among the biggest problems.” Osborne’s comments are an attempt to stiffen the ranks of the Tories in preparation of what is to come as deeper cuts are needed to balance the books.

The scene is being set in Britain and internationally for further sharp and sudden changes, in which the Old Mole of Revolution, to use the expression of Marx, is breaking through to the surface.