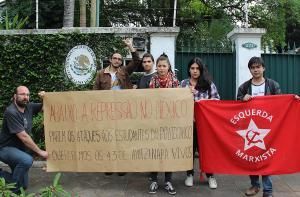 On Wednesday, September 2, there were simultaneous protests outside the Mexican consulates in Sao Paulo and Rio de Janeiro in Brazil.

In Sao Paulo, a delegation made up of students, members of the Marxist Left, the Communist Youth Union and the “Free, State and for All” campaign, rallied outside the building of the Mexican consulate with banners demanding an end to police repression in Mexico. Mexican citizens who were waiting for consular services congratulated the protesters. 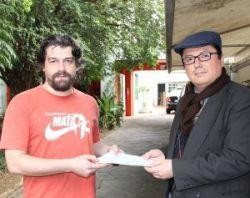 The Consul Luis Gerardo Hernández agreed to receive a letter, allowing one member of the delegation in. Comrade Caio Dezorzi, from the International Marxist Tendency, handed in a letter to the Mexican government, signed by several Brazilian social movements and organisations (see below). The organisations signing the letter are planning a follow up visit to the consulate at the end of september to demand an answer from the Mexican government. 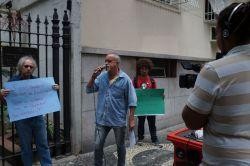 In Rio de Janeiro, a delegation of 15 people, made up of students, trade unionists, community leaders and parliamentary advisors also held a rally with speeches outside the consulate. 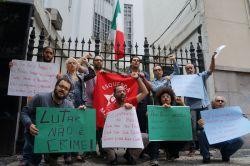 The ambassador María Cristina de la Garza Sandoval, received a delegation of 5 people, made up of comrade Fernando Leal from the Marxist Left, comrade Emanuel Cancella, from the leadership of the Rio de Janeiro Oil Workers’ Union, comrade Mauro Nunes from the Association of Parents of Pupils in the State School sector in RJ, as well as two comrades from RUA - Anticapitalist Youth. They handed in the same letter as in Sao Paulo.

To the Mexican government 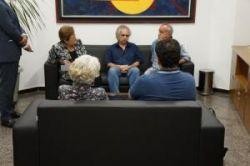 With this letter we would like to express our strongest protest against the events which happened in the evening of August 26 in Mexico City. We have been informed that at the end of a demonstration marking 11 months of the forced disappearance of the 43 teacher training students in Ayotzinapa, the DF police, under orders of Mr Miguel Ángel Mancera, detained and beat up several demonstrators who were already on their way home. Amongst those attacked by the police were mothers of the disappeared students, independent journalists as well as leading members of the students movement in the city belonmging to the CLEP and MENA. One of those attacked is the editor of La Izquierda Socialista paper, member of the National Council of MORENA and a leading member of the International Marxist Tendency in Mexico, Ubaldo Meneses.

We repudiate the attack and we demand that the Mexican government takes a position on it and makes amends to the victims of this attack.

For freedom of expression and demonstration in Mexico!

Down with police repression in Mexico!

Stop the attacks against IPN students and their organisations!

We demand the reappearance alive of the 43 Ayotzinapa students!

“Free, State and for All” campaign

“The Oil must be ours” campaign