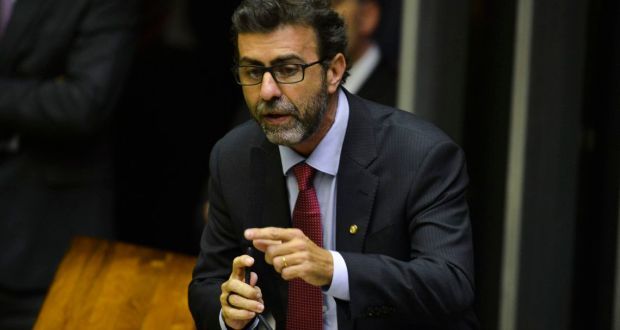 On 4 December, the chamber of deputies approved the "anti-crime bill", presented by Justice Minister Sergio Moro. Overall, 408 congressmen voted "yes", including almost all of the PT (Workers’ Party) and three congressmen from the PSOL (Socialism and Liberty Party). This positioning from supposedly left-wing parliamentarians exposes the extent to which one can go while working within the system, demonstrating the wrong policy, ignoring the global class struggle, and showing a lack of confidence in the working class.

By voting for a bill that empowers the repressive machinery of the state, these congressmen betrayed their base and the most basic principles of Marxism. The passing of this bill will facilitate the repression, mass incarceration and criminalisation of the youth and working class.

Marcelo Freixo (PSOL - Rio de Janeiro) defended his vote in favour, alleging that the committee in which he participated in the chamber of deputies left the project "less bad", was so fiercely critiqued that he reached Twitter's Trending Topics. He was called "Tabata of the Anticrime Bill": an expression referring to the young congresswoman of the PDT who created a leftist, progressive persona but voted in favour of the draconian pension reform.

The final bill that was passed was a mixture of proposals made by congressmen, building on the first draft put forward by Moro and another from the minister of the Supreme Federal Court, Alexandre de Moraes. Freixo led a working group which, after months of discussion, came to an accord to remove various clauses from the proposal, like the terrifying "exclusion of lawfulness", which would give police even more powers to kill.

For Freixo, it was a matter of voting in favour of the amended bill, or returning to the original, more-harmful bill. The difference of 400 votes, however, showed the senselessness of this argument, as the votes of the PSOL and the PT wouldn't be the deciding factor. Independently of this, in order to defend the interests of the working class without falling into parliamentary traps, the congressmen should have all voted against the measure.

Beyond this, the bill as it was approved still allows the increase of sentence lengths for certain crimes, as well as the maximum sentence. It strengthens the criterion for legitimate police defence, increases the penalty for honour crimes, amongst various other points which, contrary to the illusion presented about better protecting the population, simply strengthens the oppressive police apparatus.

Wrong. Workers aren't incapable of understanding what happens in parliament. It was clear: three congressmen of the PSOL, over 40 of the PT and the entirety of the PCdoB (Communist Party of Brazil) voted in favour of a project to increase the oppressive machinery of the state. This is called class betrayal. PDT and Rede also all voted in favour, but this is no surprise as these are bourgeois parties.

The role of the state

The repressive role of the bourgeois state against the working class is a basic theme in Marxist education. In his book The State and Revolution, Lenin explains:

"According to Marx, the state is an organ of class rule, an organ for the oppression of one class by another; it is the creation of ‘order’, which legalises and perpetuates this oppression by moderating the conflict between classes. In the opinion of the petty-bourgeois politicians, however, order means the reconciliation of classes, and not the oppression of one class by another; to alleviate the conflict means reconciling classes and not depriving the oppressed classes of definite means and methods of struggle to overthrow the oppressors.”

In the same work, Lenin affirms that "A standing army and police are the chief instruments of state power.” A communist parliamentary must never, ever, vote in favour of measures that strengthen these instruments, because in the end, as in all examples of history, this apparatus serves entirely to oppress the working class.

This doesn't mean that the left only knows what it doesn't want, and that they can't discuss security, as Freixo accuses. Marxists don't want to discuss how to improve the current model of public security, as it can not be reformed. To do so is to integrate oneself into the system. Communists propose instead the end of the military police, the arming of the proletariat and organisations of proletarian self-defence. In the current Brazilian situation, this is followed by slogans "Bolsonaro Out".

The bourgeoisie knows that, in a society based on the division and exploitation of classes, arming the oppressed classes is literally to give munitions for them to defend themselves. This is why Bolsonaro doesn't follow through with his demagogy of legalising firearms.

In affirming that the role of the parliamentarian is no longer the same as that of the social movements he came from, Freixo reveals himself as a petty-bourgeois politician, as described by Lenin, who exists to soften the class struggle. His primary function, if he were a communist parliamentarian, would not be to approve a "less bad" project of class oppression, but to vote against it and galvanise the working class and the youth to oppose them. This would be the attitude that would elevate the level of consciousness of workers.

Esquerda Marxista has run multiple candidates to municipal parliaments over the years. In the chamber of city councillors of Joinville, Santa Catarina, activist Adilson Mariano was a parliamentary communist for 16 years. He was faced with many situations in which despite working to soften bills, he voted against them in the session. 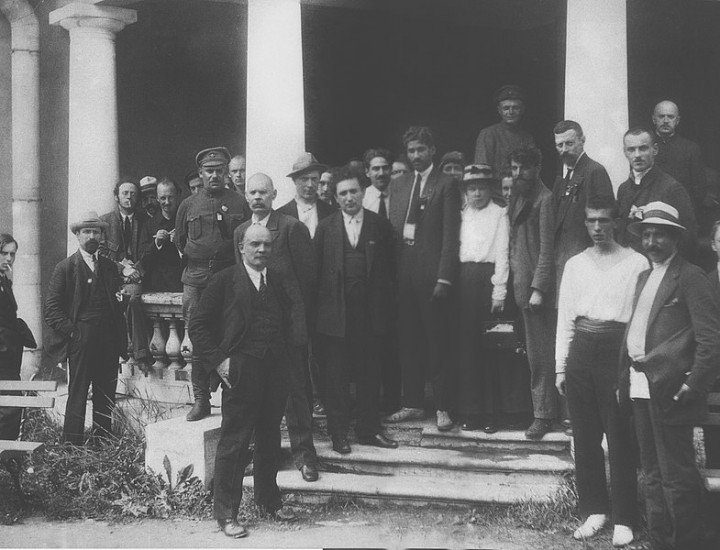 The 2nd World Congress of the Comintern passed a resolution explaining the role of a Communist parliamentarian / Image: public domain

This was the case of the municipalisation of water in the city, which planned for the creation of a mixed economy company with 49 percent control by private capital. After many discussions and amendments by the Marxist parliamentarian, the bill was altered such that the company would be 70 percent publicly owned. Even so, this represented the beginning of privatisation, and Mariano voted against it.

The same posture was taken by activist Roque Ferreira, city councillor of Bauru, São Paulo. For three years, he managed to impede the vote on the bill of "delegate activity", which passed the functions of certain civil servants to the municipal police. Roque proposed amendments that weakened the project, called forth public audiences, and when it was no longer possible to stop the vote, voted against the bill. The bill passed and today policemen only supervise pubs, but, in practice, this is only done in working-class neighbourhoods as a justification to mistreat the poorest amongst the population.

These are just two amongst countless examples. In all cases, Marxist parliamentarians used all available resources to weaken attacks, and then still voted against the bills. Their signatures aren't present on any attacks against the working class or the youth, and at the same time, always maintain a real connection with the working class, mobilising their base whenever necessary. This is how to use the bourgeois parliament to elevate the consciousness of the working class, and not to capitulate to its limitations.

In the documents of the 2nd Congress of the 3rd Communist International, there is a resolution regarding 'The Communist Party and parliamentarism". In it, the form in which communist parliamentarians should act is outlined:

“Even in cases where there are only a few of them in the whole parliament, communist members of parliament have to show a challenging attitude towards capitalism in their whole behaviour. They must never forget that only he is worthy of the name of a communist who is an arch enemy of bourgeois society and its social democratic hacks not only in words but also in deeds.”

No matter the justification, what the three PSOL and the 40 PT parliamentarians did was vote against the interests of the working class. Even if Freixo considers the removed clauses of the bill a loss for Moro, this is contrary to what Moro himself says. He declared to the press that the approval of the project represented "the hardening of justice and public security" and that "they will work hard to return the parts which were removed in the senate". That is to say, even with all these manoeuvres, the possibility of removed clauses returning still stands.

The PSOL was the only party that allowed its parliamentarians to vote at their discretion, showing their complete capitulation to the system. The Socialist Left Movement - an internal faction of the party - decided that one of its parliamentarians, Sâmja Bomfim, would be against the proposal (because after all, the project is bad) and that Fernanda Melchionna would "accompany Freixo". Accompanying Freixo shouldn't be a policy to follow, he is a traitor. The tactic of the MES, in addition to being incomprehensible, left a black mark on one one of its deputies. The third parliamentarian from the party to vote in favour was Edmilson Rodrigues. The PT and all bourgeois parties instructed their parliamentarians to vote in favour of the bill.

The class struggle is growing

The world is at a boiling point. As has happened at other moments in history, a revolutionary wave sweeps the world. General strikes and uprisings are occurring in France, Iran, Sudan, Algeria, Tunisia, Hong Kong, Haiti, Ecuador, Iraq, Lebanon, Bolivia and Chile. Catalonia continues with enormous mass movements. The working class resists in all places the rotting of capitalist society, and the evils this system creates for humanity. 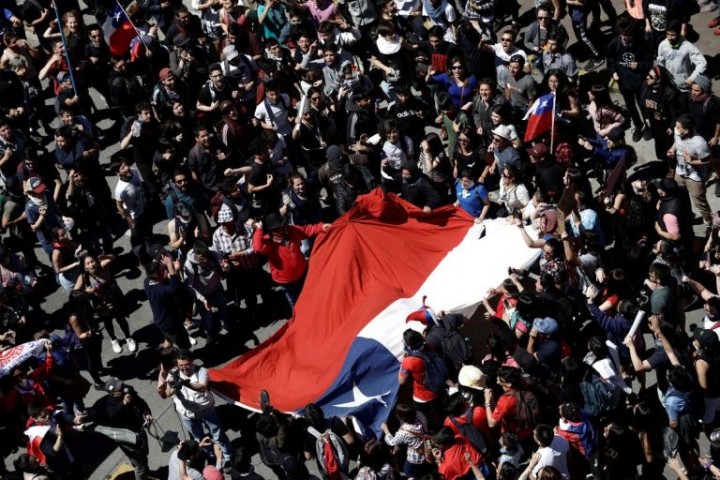 The world faces an international wave of class struggle. The masses are being held back only by their leaders / Image: STRINGER

Brazil is in the midst of this international scenario, and the risk of a social explosion is felt by the bourgeoisie. It's not for nothing that Bolsonaro mentions a new AI-5 (enabling act of the Brazilian dictatorship) if the "left radicalises", referring to what happened in Chile. This is why the political line adopted by the PT, PSOL, PCdoB of the "defence of (bourgeois) democracy” is so embarrassing.

The vote in favour of the anti-crime bill demonstrates the impact of poor political reasoning. Throughout history, there are numerous examples that these parliamentarians should have learned from. For example, when parliamentarians of the Social Democratic Party of Germany voted in favour of war credits, side by side with their national bourgeoisie, when they should have opposed this imperialist war. The support for WWI by these "socialists" will be forever marked in history.

If the heavy battalions of the Brazilian working class still haven't exploded in indignation it isn't because of a conservative wave, or as Freixo suggested, because "we live in an awful situation in this country, after the election of Bolsonaro". What holds back the pressure is precisely the treacherous acts of the union leaders, in particular those of the CUT, who seek to conciliate with capital and save bourgeois institutions, superseding the movement of the masses.

This is amplified by the lack of confidence inspired by supposedly left wing parliamentarians and parties like the PT, the PCdoB and the PSOL, who voted in favour of Moro's bill. The leadership of these parties have long abandoned the perspective of class struggle, which is why they refuse to raise the "Bolsonaro Out" flag. They fear any alternative that does not seek to reconcile with the bourgeoisie, and they reject any revolutionary perspective.

But the class struggle is the motorforce of history and cannot be held back forever. Sooner or later, the masses in Brazil will take to the streets, as has been happening around the world. Until then, it falls to the Marxists to prepare the construction of a revolutionary party.