Details
our correspondent in Brazil
11 April 2011 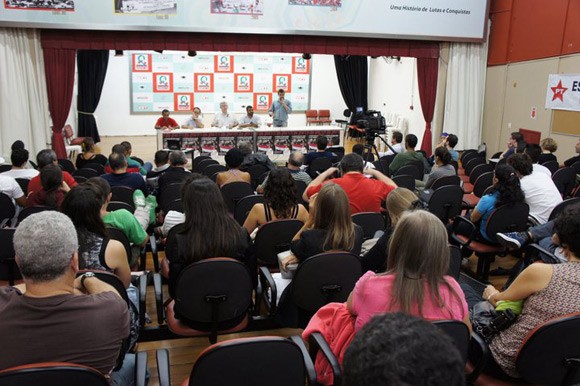 Together with Alan Woods on the platform were important trade union leaders, Verivaldo Mota Silva of the executive committee of the Glass Workers’ union (Sindicato de trabalhadores Vidreiros de São Paulo) and comrade Hélio of the executive committee of the Chemical Workers’ Union, as well as comrades José Carlos Miranda, leader of the Black Socialist Movement and Caio Dezorzi, both members of the Brazilian Marxist Left (Equerda Marxista) that organized the meeting.

More than 130 attended the meeting, almost all of them leading trade union activists from São Paulo. As in all of these meetings there was immense interest in the ideas of Marxism as expounded with great clarity by comrade Alan.

The meeting was opened by the Chemical Workers’ leader comrade Helio, who said it was a great honour to have comrade Alan Woods to defend the ideas of Marxism here, and that this was a very important task for the workers’ movement.

Alan then proceeded to outline the general world situation, dealing not only with the Arab Revolution but with the general crisis of world capitalism and its effects on the workers’ movement internationally.

He asked the audience how many of them had heard of the events in Wisconsin in the United States, and very few had. They expressed great interest when he described in detail the struggles of the workers of the USA: “I am not talking about Cairo or Caracas or Russia in 1917 but the USA right now”, he said.

This was a solidly proletarian audience in the most important centre of the Brazilian workers’ movement. It was therefore no surprise that there were no ultra-left sectarian elements present, and the questions and discussion were based on concrete issues that interest the workers.

There was also a lot of interest in international affairs. The first speaker from the floor, a veteran Left activist, congratulated Alan for his work in defence of the Bolivarian Revolution and emphasized the need for solidarity with Venezuela.

There were other questions on Cuba, perspectives for the Arab Revolution, Brazil and the nature of capitalist crisis, all of which comrade Alan answered fully.

At the end the workers showed their appreciation with warm applause, and many came to the platform to thank the speaker ad get him to sign books. Many contacts were also made for the Marxist Left.