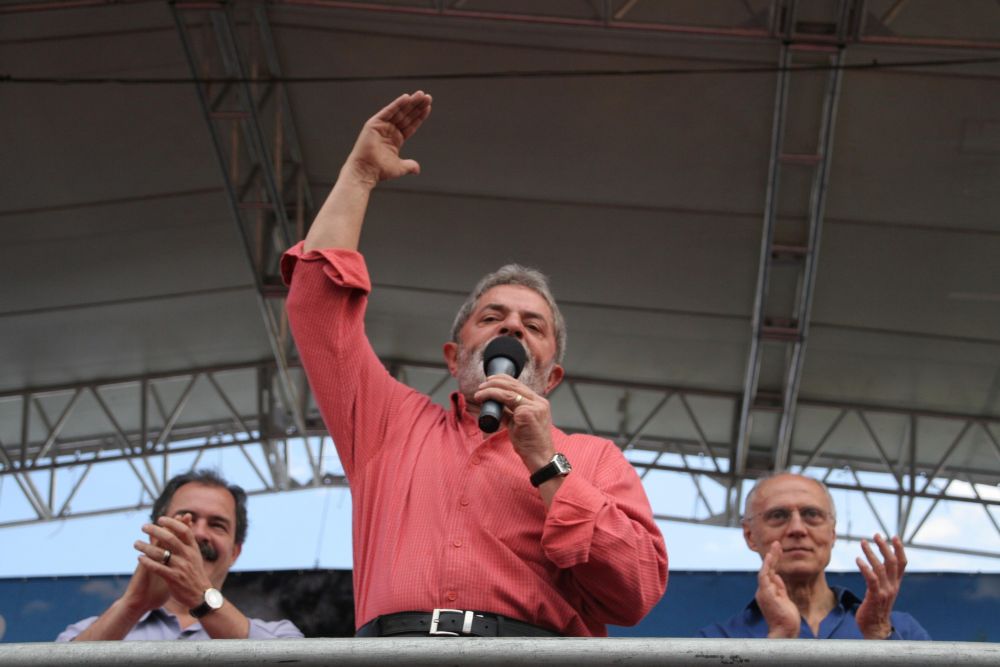 Federal Police arrived at the home of former Brazilian President Luiz Inácio Lula da Silva at 6am on Friday, March 4th, executing a bench warrant, commanding him to appear before the authorities to give testimony. Lula was released 3 hours later and has not yet been indicted.

The bench warrant had been issued by a judge investigating the Car Wash corruption scandal, in which it is alleged that construction companies paid politicians in exchange for lucrative contracts from the state owned oil company Petrobras. Politicians from the ruling party and the opposition are said to be involved in the scandal, but so far only leading members of the PT have been arrested. Here’s the statement issued by the Marxist Left (Brazilian section of the IMT) on this case:

The Marxist Left condemns the bench warrant for questioning against Lula, which took place on Friday (4 March) morning, organised by the Federal Police, together with the bourgeois media, and considers this to be an attack on democratic rights.

We do not support the class collaboration policy, nor the methods adopted by the PT and the government. Corruption originates in the alliances with the bourgeoisie and its state, and the defence of capitalism made by Lula, Dilma, and the PT.

Operation Car Wash aims to prepare the ground to attack the entire left and workers' organisations. It is pressing the government increasingly to the right, even though this government is already at the forefront of attacks against the working people.

The trial of the AP 470, the so-called mensalão (monthly allowance), had already led to a series of attacks on democratic freedoms. Cowardly and shamefully, Lula and the PT refused to defend their own leaders. Now they are at the receiving end of the fury of bourgeois reactionaries.

The operation on Friday represents a qualitative leap in the political situation, with the aim of further weakening the PT, but mainly to test the strength of any reaction against a possible bourgeois offensive to achieve their goals. For this, they made the judiciary pass over the already precarious laws and institutions of the Republic.

The targets of this operation are not only Lula and the PT, who are already demoralised. The intention is to open the way for the demoralisation and criminalisation of the labor movement and its organisations.

In this time of deepening economic and political crisis, the path chosen by the bourgeoisie is the direct attack on the conquests and rights of the working class. It is preparing the ground to face the resistance of the masses, in a situation where the working class and youth, especially since June 2013, have shown their readiness to struggle on several occasions.

The leadership of the PT, Lula, and Dilma have a direct responsibility for the current situation. The policy and methods they advocated and applied destroyed the PT as a class party, as a tool for the struggle of the working class. The betrayal of the wishes of the people who elected them—with a real electoral swindle, the application of a policy of submission to the interests of national and international capital—led to the political bankruptcy of the PT.

The Dilma government is carrying out a policy of attacks against the rights and conquests of the working class in order to ensure the payment of internal and external debt. It cuts the budget for social spending, opens the way for the exploitation of the pre-salt layer oil reserves by the multinationals, divides up Petrobras and privatises its best "pieces", expands the privatisation, and is preparing a new pension counter-reform. It proposed an urgent Anti-Terrorism Bill which is an instrument of war against the people as it intensifies the criminalisation of social movements.

We are against the attempts of the right wing to impeach Dilma, because their aim is to further deepen the attacks on our class. But we do not fall into the siren calls of those who scream that there is a coup, as a justification for their defence of this government and its anti-proletarian policies.

A left-wing strategy for the present situation can only be found through the struggle for our demands, against all the attacks of the government and the employers. Through the independent organisation of the class, a left-wing way forward must be found. It is in this struggle against capital and its policies, against reformism, and in the struggle for socialism that we will build again a great class party truly loyal to the workers and youth.

It is in this sense that the Marxist Left will participate in the actions called for March 31st by the trade unions and social movements, and denounces once again this most monstrous arbitrariness of the judiciary, the Federal Police, and the bourgeois media.

In defence of democratic rights!

Down with austerity! Down with capitalism!

For a People's Constituent Assembly! For a workers' government!