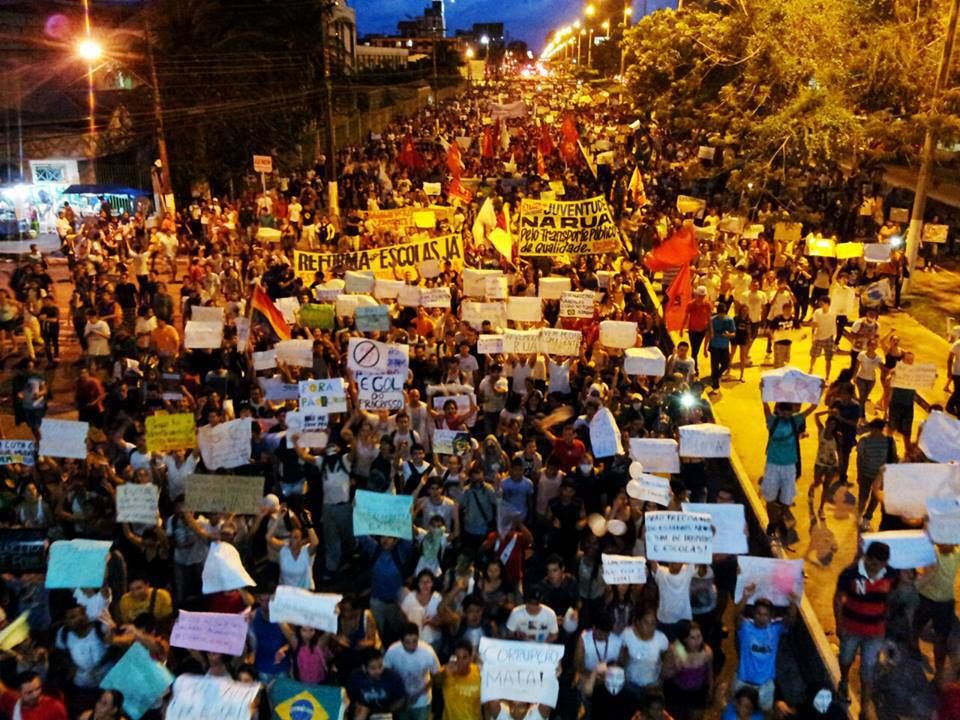 The struggles of the working class worldwide are heating up. In Brazil, after the "June Days" [protests against bus fare increases], the Dilma government, without meeting any of the demands raised by the youth and the working class, announced a package of mass privatizations: harbours, oil, roads and airports.

The smokescreen created with the single issue of Constituent Assembly and Political Reform led to a conflict with the bourgeoisie which is linked to the government and the ruling PT (Workers Party). The move, which was aimed at calming the masses, threatens to turn into a mere plastering over of party reform and is far from meeting the cry of the streets.

The masses are suspicious and tired of all this, and have started to mobilise on the streets and with strikes demanding the fulfilment of their demands.

In Rio de Janeiro education workers went on strike and for nearly two months have suffered violent repression by the governments of the local mayor Paes and regional governor Cabral, allied and protected by the Dilma Rousseff government.

In front of the headquarters of the oil company Petrobras there is a protest camp against the auctioning off of the Libra Oil Field. Oil workers are preparing to launch an all out national strike on October 17th for their collective bargaining demands concerning wage increases as well as against the privatization of oil.

The postal workers are engaged in a national strike and seek to unify their mobilizations with the bank workers, as has already happened in the city of Campinas in the state of São Paulo.

The bank workers, on strike for over 15 days, are resolute in their struggle, despite the weak position of the trade union leadership which has so far refused to call any street demonstrations.

In São Paulo there has been a demonstration against the selloff of the Libra oil field and in solidarity with the struggles of teachers, postal workers and metalworkers. If these did not acquire a larger character it was just because the leadership threw cold water on the movement and is seeking to address the issues as if they were specific and unique to each group of workers. They are doing their best to prevent unity amongst the different sections in struggle.

There is a strong feeling that the struggles can only be victorious if they are unified at a national level.

If Paes and Cabral use repression in Rio de Janeiro, in Sao Paulo governor Alckmin is not lagging far behind ...

There are violent actions, arrests and convictions of protesters, including some based on the old National Security Law (inherited from the military regime) and maintained until today by the governments of Lula and Dilma. In São Paulo we saw, once again, the violent actions of Alckmin's police. Bombs, batons and bullets were used. Arrests were made amid accusations of conspiracy. The same allegations used by the Supreme Court in the case of the false "mensalão" trial of PT leaders for corruption. But Cabral, Paes and Alckmin are not alone.

In Rio Grande do Sul, a state ruled by PT governor Genro, the answer to the voice of the streets was violent repression, arrests and raids on homes of activists and trade union members. This is criminalization, the typical practices of the military dictatorship. Shots, bombs, batons and prison cells. This was the answer to the voice of the streets. All very similar to what Paes and Cabral in Rio de Janeiro are doing. This is a true picture that indicates where the policy of class conciliation leads to.

Both in Rio de Janeiro and São Paulo, the Black Blocks are intervening and acting in the demonstrations in a way that does nothing to help the movements and their demands, their self-organization. Their actions of attacking buildings, public agencies, fast-food restaurants and burning buses do not harm capitalism at all.

At the end of the demonstrations in Rio de Janeiro and São Paulo, the Black Block members came out destroying and burning. The bourgeois press came out reporting the destruction, announcing that this was the result of the demonstrations of the teachers or those who protested against the privatization of oil. The focus of the news was the action of the "thugs" and not the struggle and its demands.

It is the responsibility of the trade unions to organize strong stewarding, made up of workers and youth, determined to defend their protests against the repression of the police and also from those who by their wrong methods , leave the door open for the actions of the police and infiltrators.

The correctness of the prognosis of the Marxist Left

The report of the political leadership of the Marxist Left, which opens the discussion period towards its Congress, contains a prognosis that is already demonstrating its correctness: "But the fireworks do not last. The life of the masses is governed by concrete issues. The story is stronger than the apparatus. And the only socialist answer to popular aspirations is the realization of the platform of struggle raised by the Marxist Left: End of privatizations and re-nationalization of everything that was privatized, cancellation of Internal and Foreign Debt, agrarian reform, nationalization of the financial system, and expropriation of large multinational companies, meet the popular demands and planning of the economy by a government of a Socialist Republic of Councils as part of the struggle for the World Socialist Republic of Councils.

Whether Lula and the PT leadership like it or not, in the next period, clashes between the masses and the federal government are very likely. Not to mention that wage negotiations of broad layers of workers will develop later this year in a framework of government austerity and magnified economic difficulties."

We remain firm in the battle for the platform of demands above and in our commitment to the struggles, the trade unions, the strikes. We call on everyone to unite in defence of this platform.