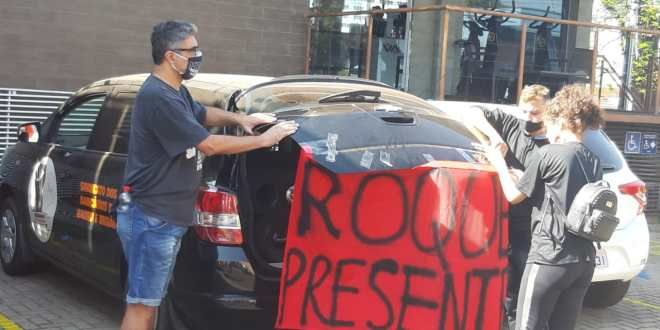 Esquerda Marxista, the Brazilian section of the International Marxist Tendency, honored and paid tribute to comrade Roque Ferreira at his funeral on 5 September in Bauru. Because of the conditions of the COVID-19 pandemic, the burial at Jardim Ypê cemetery was restricted to 15 family members. Roque passed away on 4 September after complications during his hospitalisation after testing positive for COVID-19. However, like everything in Roque’s life, his funeral was filled with not just displays of affection, but also a deep revolutionary spirit.

Roque was an outstanding union leader, former president of the Railway Union of Bauru and Mato Grosso do Sul, and founder of CUT. He was a councillor in Bauru for two terms and was the current president of PSOL-Bauru – after having disaffiliated from the PT in 2015, the party of which he was a founder – and a pre-candidate for mayor. He was a member of the Central Committee of Esquerda Marxista and one of the main leaders of the Black Socialist Movement.

At 8:30 in the morning, there was a gathering in front of the Bar do Genaro, of the great friend and companion Fabrício Genaro, which has been an important meeting place for socialists in the city to have good conversations, political meetings, and cultural events, which were always attended by Roque. In attendance were various friends and family, activists from PSOL, PT, PSTU, MST, CUT, unions and student organisations, along with Esquerda Marxista, Freedom and Struggle, Women for Socialism, and the Black Socialist Movement who shared greetings and stories of great memories of Comrade Roque.

There were various moving accounts of Roque’s struggle to defend the legacy of life and the continuation of the struggle for the socialist revolution. Tatiana Calmon, a tireless fighter for social justice, a companion in struggle and a life companion of Roque, sang a beautiful song that represented Roque’s departure as a trip in which Roque took a train and she (and all of us) stayed at the station. It was a beautiful way to say goodbye to a railway worker who was proud of his trade.

Then, around 10:30am, we left in a motorcade towards the hospital to accompany a funeral car to the cemetery. It was a moment of great inspiration. More than 140 motorists used their horns and banners to pay their respects to Roque. Cars with small photos of Roque on their windshield were seen all across the city of Bauru, showing special tribute to a comrade who dedicated himself entirely to the radical transformation of the city, the country and the world in which we live. Many people in the streets shouted “Roque lives!” or “Roque is present!”, fully in tune with the collective feeling that permeated the moment. The drivers drove their cars with their left fists raised out their windows. Flags and banners on the cars displayed the class conscious tone that prevailed among the comrades, friends, and families.

Upon arriving at the cemetery, a large concentration of numerous organisations of the working class and youth and friends from various organisations (samba, football and political struggle) were gathered at the front gate to show their solidarity and reverence to Roque. Again, people spoke, combining the generation that had struggled alongside Roque for decades – from his fight for the construction of the PT and CUT and the struggle of the black movement and the railway workers – with young comrades engaged in recent struggles, and in whose training Roque played a fundamental role. Roque’s influence on so many is the result of the generosity and respect he had for everyone, combined with his firm positions for the defence of socialism and combating reformism and opportunism.

With great pride, Esquerda Marxista, an organisation in which Roque was a leading activist, used the microphone to reaffirm Roque’s legacy and positions, his Marxist conviction, his revolutionary method and patience, his full confidence in the workers’ movement and the youth, and his work to build the revolutionary organisation. Together with the Black Socialist Movement, Women for Socialism and Freedom and Struggle, we shared our memories in this inspirational gathering in which a beautiful tribute was paid to an exemplary comrade.

During the interventions, there was denunciation of the murderous policy of the Bolsonaro government which is fully responsible for more than 125,000 lives lost to COVID-19 in Brazil, which could have been avoided had it not been for the decision of Bolsonaro to prioritise the profit of the capitalists at the expense of the health of the working class. With a force that expressed their class hatred, more than 250 people present shouted in unison: “Fora Bolsonaro!”

After the speeches by the comrades of Esquerda Marxista, Tatiana Calmon, together with Roque's four children, Michele, Vinícius, Dandara and Tales, ended the gathering with beautiful words that represented Roque’s life and the task of moving forward, finishing by singing The Internationale all together with fists in the air.

Esquerda Marxista is very proud to say that Roque was our activist, our leader, our point of reference. We will strive to continue applying Roque’s teachings every day, with his determination, his firmness and his generosity.

Activists and working-class organisations from different parts of Brazil and other countries published notes of condolence and homage to Roque. Even some political opponents sent greetings, and the mayor of Bauru himself decreed a three-day period of mourning.

Roque was essential and will be sorely missed. He paved the way for those who are coming up. We owe Roque to follow through with our battles, in the streets and in the struggles, for socialism.

Comrade Roque, we will fight on!