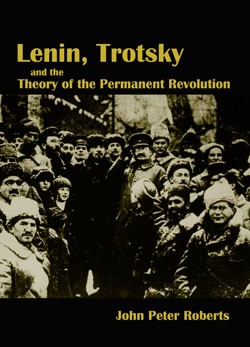 "It is therefore refreshing to read a book which, with a wealth of interesting material based upon an exhaustive research of the subject, develops new insights into the history of Bolshevism and the Russian Revolution... particularly interesting is the detailed account of the way in which Lenin's position on the nature of the Russian Revolution evolved from his original theory of the democratic dictatorship of the proletariat and peasantry to his final position in 1917. The author shows clearly that the intention of the Bolsheviks was not to achieve a ‘Russian Road To Socialism' but to ignite the flame of international revolution." (From the Foreword by Alan Woods, author of Bolshevism, The Road To Revolution')

Available from the Wellred bookshop site at a special price of just £7 plus postages etc. - go now to www.wellredbooks.net

Wellred also has in stock Trotsky's book ‘The Permanent Revolution' as well as many other socialist and Marxist books, many available at a special price. Recent titles include ‘What Is Marxism?' and Trotsky's ‘History Of The Russian Revolution' (available in a 3 volume edition) as well as copies of Ted Grant's book ‘The Unbroken Thread.'